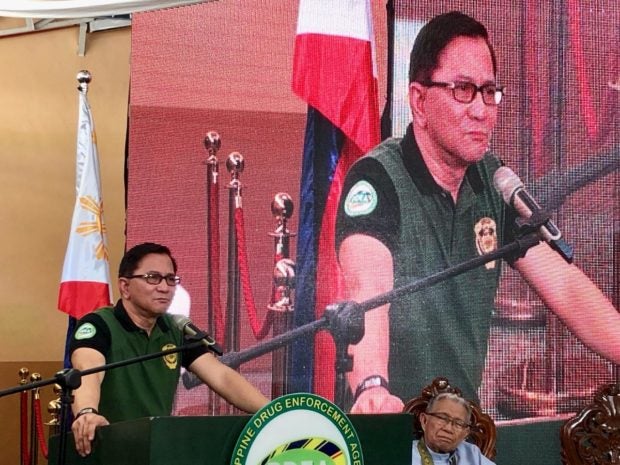 “There are still reports, especially some law enforcement agencies, whenever we seize drugs,” the PDEA chief said.

“I received some information from assets, from other law enforcement agencies themselves, nakakarinig ako… mga information na ‘Ganito ginagawa ni ganyan, ‘pag nago-operate, ganyan ang ginagawa nila.’ So, hearing these reports, it will just show that there’s still recycling of drugs,” he added.

When operatives seize drugs, half would be surrendered while the rest would either be saved for future operations or be sold, according to the PDEA chief.

“Especially on operatives down there. Ang usually kasi, Sir, na nagiging modus is that when they seize drugs, maybe half of that will be surrendered or ‘yun ang ipalalabas nila na ‘yun lang ang na-seize nila, while all the other ones are being kept either for future operations or the worse of it is they sell the drugs,” Aquino said.

Responding to Aquino’s revelation, Senator Panfilo Lacson, who presided over the hearing, said: “It strikes me, medyo interesting, ‘for future operations.’ Meaning ipa-plant?”

Drilon then further asked Aquino what measures are being taken by the agency “in order completely eradicate this evil of recycling these confiscated drugs,” which, he pointed out, is a practice that poses “a very serious problem.”

“For example, we are conducting joint operations with the PNP (Philippine National Police), Armed Forces of the Philippines, NICA (National Intelligence Coordinating Agency), and maybe some intel operatives of the Army, so ‘yung recycling modus dun, Sir, nawawala, he added. /kga