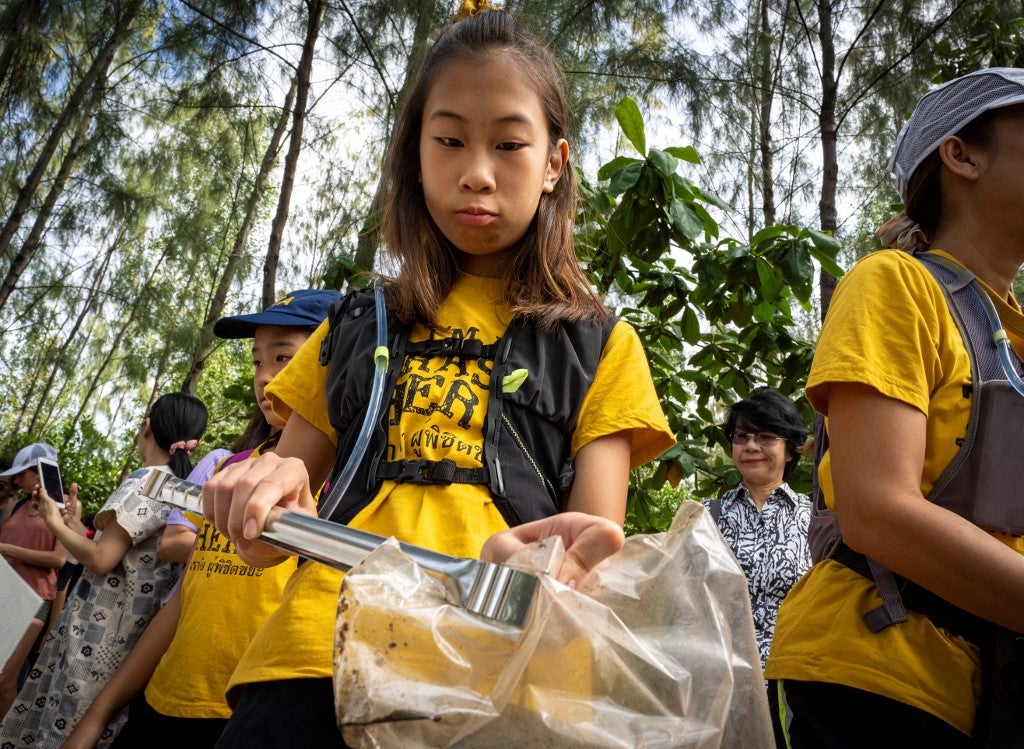 In this picture taken on August 25, 2019, 12-year-old Ralyn Satidtanasarn, known by her nickname Lilly, collects plastic waste during the Trash Hero cleaning initiative at the Khung Bang Kachao urban forest and beach in Bangkok. (Photo by Mladen ANTONOV / AFP)

BANGKOK — Skipping school to glide through a dirty Bangkok canal on a paddleboard, Lilly fishes out rubbish in her mission to clean up Thailand, where the average person uses eight plastic bags every single day.

“I am a kid at war,” the bubbly 12-year-old says after a painstaking hour-long routine picking up cans, bags and bottles bobbing in the canal.

“I try to stay optimistic but I am also angry. Our world is disappearing,” she adds.

Thailand is the sixth largest global contributor to ocean pollution, and plastic is a scourge.

Whether it’s for wrapping up street food, takeaway coffees or for groceries, Thais use 3,000 single use bags per year — 12 times more than someone from the European Union.

In June, Lilly won her first victory: she persuaded Central, a major supermarket in Bangkok, to stop giving out plastic bags in its stores once a week.

“I told myself that if the government did not listen to me, it would be necessary to speak directly to those who distribute plastic bags and convince them to stop,” she explains.

This month some of the biggest brands, including the operator of the ubiquitous 7-Eleven convenience stores, pledged to stop handing out single-use plastic bags by January next year.

Mindsets have started to shift this year with the deaths of several marine mammals whose stomachs were lined with plastic, stirring emotions.

The demise last month of a baby dugong was mourned on social media, reviving discussion in the government over a proposed ban on most single-use plastics by 2022.

But critics say along with new rules, there needs to be enforcement mechanisms such as fines.

For now, young activists like Lilly can help capture attention.

“You might be able to tune out all of the evidence and advocacy in the world, but it’s very hard to ignore a child when they ask why we’re trashing the planet that they have to live on,” says Kakuko Nagatani-Yoshida, regional coordinator for chemicals, waste and air quality with UN Environment.

The US-Thai youngster started campaigning at the age of eight after a seaside vacation in southern Thailand where she was horrified by a beach covered in rubbish.

“We cleaned up with my parents, but that was not helpful because other waste was thrown out by the sea the next day,” she recalls.

Then came the global movement initiated by 16-year-old Greta Thunberg, who has become a key face in the battle against global warming.

Inspired by the young Swede, Lilly did sit-ins in front of the Thai government buildings.

“Greta Thunberg gave me confidence. When adults do not do anything, it’s up to us children to act,” she insists.

Though she often skips class to carry out her activism, she will not be in New York alongside Thunberg for a protest on September 20 just days before the UN climate conference.

“My place is here, the fight is also in Southeast Asia,” she says.

Even if she sometimes wants to take a break and “go play” like other kids, she also takes part in cleaning sessions organised by local association Trash Hero.

Other activists praise her but say she is up against massive corporate interests.

The main obstacle is the petrochemical industry, one of the main markets for plastics, accounting for 5 percent of Thailand’s GDP and tens of thousands of jobs.

“Lilly is a very good voice for the youth of this country but the lobbies are very powerful and that makes any change difficult,” concedes Nattapong Nithiuthai, who set up a company turning discarded waste into flip flops.

She can also count on the support of her parents, who help her write speeches to the UN and government officials.

Her mother, Sasie, herself a former environmental activist, adds: “At first, I thought it was a child’s fad, but Lilly hung on, so I decided to support her.”