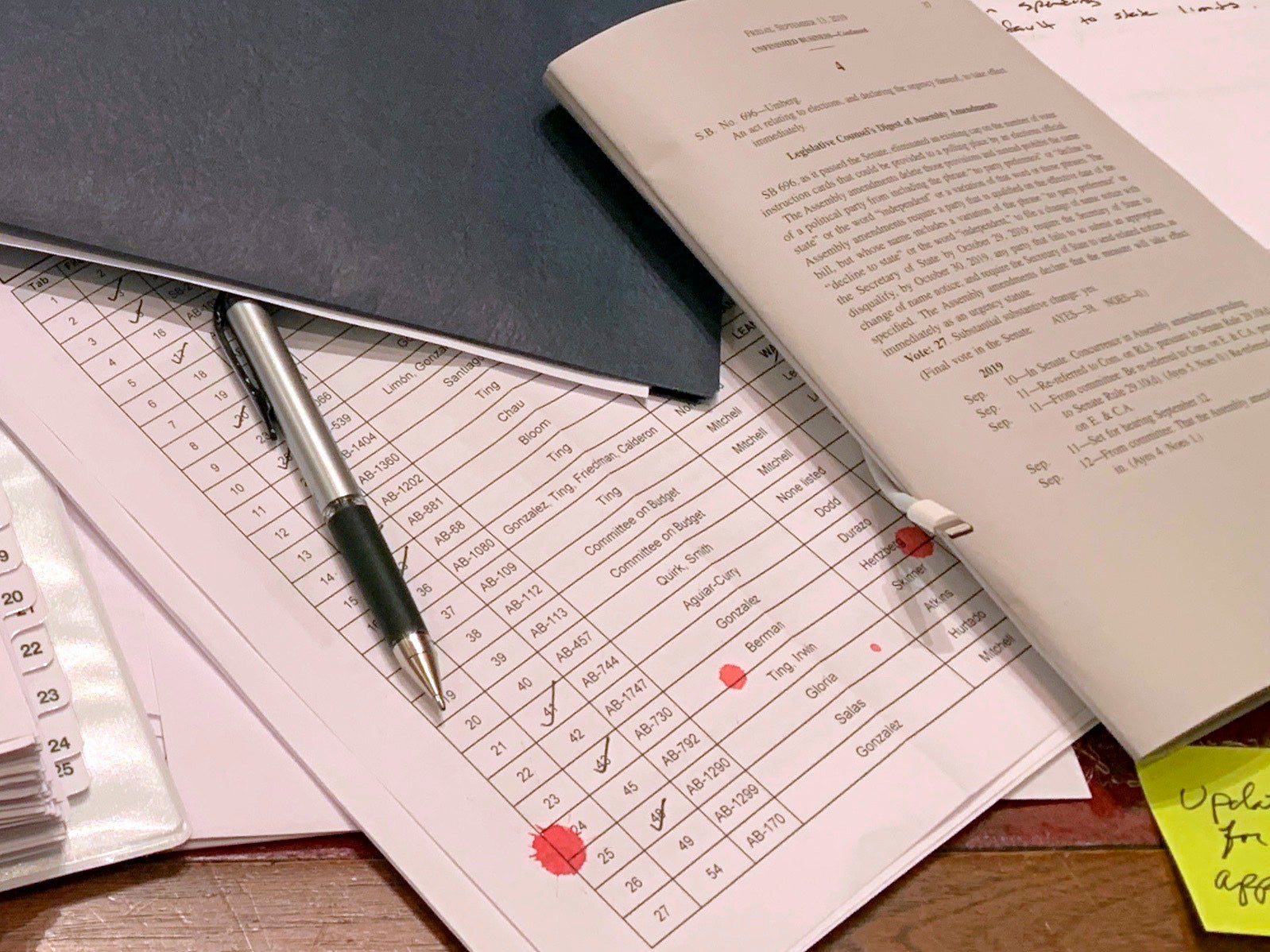 In this photo provided by state Senator Steven Glazer, red dots are splattered on papers on Glazer’s Senate desk, after a woman threw a container with red liquid from the public gallery of the Senate chambers during a legislative session, in Sacramento, Calif., Friday, Sept. 13, 2019. The woman was taken into custody and the Senate chambers was cleared as an investigation was conducted. (Senator Steven Glazer via AP)

SACRAMENTO, Calif. — California police have arrested a woman who threw a feminine hygiene device containing “what appeared to be blood” onto the floor of the state Senate, splashing onto lawmakers and forcing them to finish their work in a committee room on the final day of the legislative session.

Senators had just finished taking a vote about 5:14 p.m. Friday when a woman tossed the substance onto the floor of the Senate from the public gallery, saying: “That’s for the dead babies.”

The California Highway Patrol identified the woman as 43-year-old Rebecca Dalelio. She faces several charges, including assault, vandalism and disrupting “the orderly conduct of official business” at the state Capitol.

Police say Dalelio walked out of the gallery and did not resist when she was arrested. The news release did not give a motive, referring to the woman as a “demonstrator.” But the action came as hundreds of people protested at the Capitol against a recently signed state law seeking to crack down on fraudulent medical exemptions for vaccinations.

The Sacramento Bee reports that Dalelio posted $10,000 bail and was released from the Sacramento County Main Jail on Saturday, according to sheriff’s department records.

Several lawmakers sought to link the woman to the protesters, including Sen. Richard Pan, who last month was shoved in the back by a protester as he was walking near the Capitol.

“This incident was incited by the violent rhetoric perpetuated by leaders of the antivaxx movement,” Pan said in a news release. “As their rhetoric escalates, their incidents of violence does as well. This is an attack on the democratic process and it must be met with strong condemnation by everyone.”

The drama unfolded on the final day of the Legislative session, with lawmakers still having several key bills to debate before adjourning for the year. With authorities still investigating what the substance was, Senate leadership decided lawmakers would finish their work in a smaller committee room. Legislative aides scrambled to move the Senate’s work to the room as journalists and others watched from an upstairs balcony.

“A crime was committed today, but the Senate will not be deterred from completing the Senate’s business,” Senate President Pro Tempore Toni Atkins told lawmakers as the Senate reconvened.

Many Republicans had opposed the vaccine bill. But on Friday, Senate Republican Leader Shannon Grove condemned the act and apologized to her colleagues for the disruption.

“The person that is in question should be prosecuted to the fullest extent of the law,” Grove said.

Democratic Sen. Steve Glazer said the liquid landed on his head. He also said five other senators were struck by the liquid.

“I’m going to take a shower,” Glazer told reporters crowded in the hallway outside the Senate chambers. “We have work to do.”