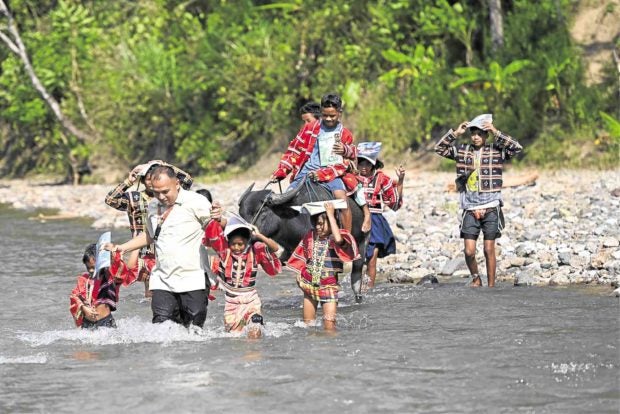 The children are all of the Matigsalug tribe — “riverfolk” in the Manobo tongue. They study and play together amid the lush environment of their school.

But behind the picturesque scenes is a sad truth, one that the Matigsalug folk share with many indigenous peoples (IPs) across the country.

To get to their school, the children must walk for at least two hours or ride on horseback on rough terrain, “cross 16 streams” and climb a hill, according to Junmerth Cresencio Jorta, Kèupiyanan’s head teacher.

Hardly an incentive for the kids, he said, who would otherwise just skip class to help out on their parents’ farms or eventually drop out.

“Absenteeism is the biggest challenge among [IP] students,” Jorta told the Inquirer. “And one of the biggest reasons behind that is extreme hunger — they have nothing to eat at home, so they prefer to work and forget to study.”

Jorta took the job in 2016, and soon his classes also served as a free feeding program for the students. With the help of the organization Hapag-Asa, the children enjoyed a richer, regular diet, which translated to better health and class attendance.

Many Faces of the Teacher

For “encouraging more students to enroll and curbing absenteeism and dropouts” among the Matigsalug children, Jorta was named among this year’s Many Faces of the Teacher awardees by Diwa Learning Systems and Bato Balani Foundation in time for World Teachers’ Month this October.

“With his … determination, the children’s minds, bodies and hearts are satisfied,” read Bato Balani’s citation for Jorta. “And with a strong body as foundation, their future is filled with possibilities.” 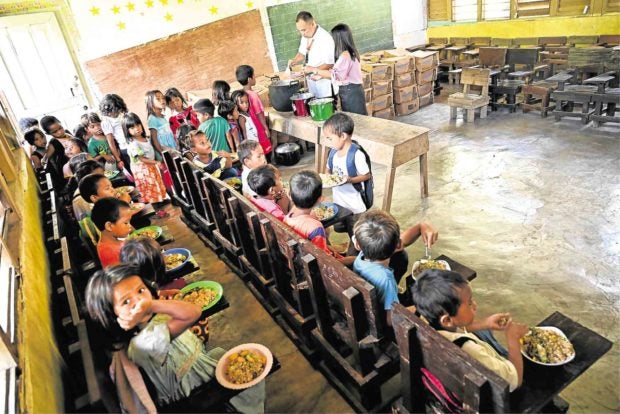 The school also has a feeding program to help the kids continue their studies. —PHOTO COURTESY OF BATO BALANI FOUNDATION

But Jorta, 31, has no illusion that his program alone can keep the Matigsalug children in school. Aside from extreme poverty, the longstanding armed conflict between communist rebels and the military and the lack of school resources hinder not only his efforts but also his students’ chances of higher studies.

Yet he is proud of his students, such as a boy named Arya, now in Grade 11.

“He really excels in all subjects, and he can even keep pace with, if not beat, non-IP students in competition,” Jorta said. “He’s always at the top of his class. But even he can lapse into absenteeism, too, because his family often does not have anything to eat.”

Being a poor farmer’s son, Jorta is also no stranger to hunger pangs. But his parents were able to support him and four siblings at Bukidnon State University, where they all graduated with a degree in education.

All five siblings are now full-fledged schoolteachers. Jorta, however, almost veered to a different path because he was also drawn to spiritual contemplation and the study of scripture.

A Seventh Day Adventist, Jorta recalled being “inspired by the missionaries who taught us. They would travel mountains, reach the unreachable people. I also wanted that life.”

During his first few years as a teacher, Jorta taught grade school pupils in the provincial capital of Malaybalay. For a time he was employed in private schools, holding classes in air-conditioned rooms.

‘I really want this life’

But soon he realized that he was needed elsewhere.

“People often said that I was insane. They don’t understand why I hung onto my missionary dream. Some even told me, ‘Bobo man ’to si sir (He’s such a fool),” he said with a chuckle.

“I don’t argue [with them] anymore. I don’t know if they would understand me; I really want this life because it seems to bring me closer to God.”

When he was still reporting to Kalagangan Elementary School, the principal asked if he could take the lead in their extension missionary school in far-flung Sitio Balugo, southwest of the capital.

Back then, Balugo only had one other teacher, and pupils with ages ranging from 6 to 11 were bunched together in the same class. 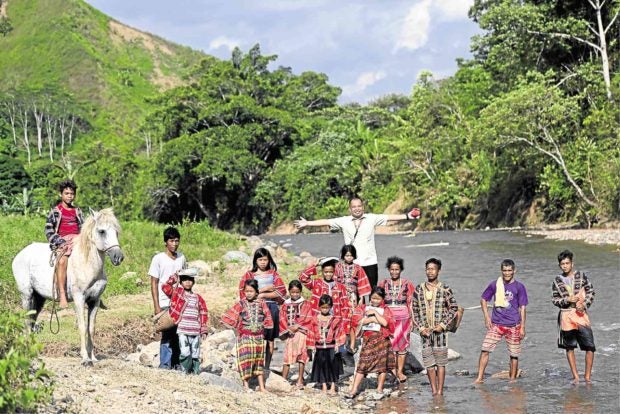 SPREADING EDUCATION Junmerth Cresencio Jorta with some of his students at the Kèupiyanan Tè Balugo school, which he heads. —PHOTO COURTESY OF BATO BALANI FOUNDATION

In his first two months in Balugo, Jorta had as many as 100 youngsters in his care.  “I fell ill during the first week,” he said. “I tried to teach them all at the same time, [but] I got so burned out. So I told the community elders that I would have to schedule it.”

He later discovered another challenge: one in every four of his students was severely malnourished.

Jorta took this as an opportunity to fulfill his missionary calling. He wrote a letter to Hapag-Asa, seeking its assistance.

The organization later agreed to provide the school with a monthly supply of MannaPack Rice—a mixture of rice, dehydrated vegetables and soy nuggets, fortified with vitamins and minerals and especially developed for malnourished children.

Jorta and the kids would often cook the meals together, while the parents planted seedlings in the school’s backyard.

The pupils started to put on weight—as well as their siblings who were not enrolled but were also covered by the feeding program.

“Their [academic] performance improved because they were attending class daily and they were better nourished. They stayed in school,” the teacher said.

Still much to do

Jorta’s work also caught the attention of San Fernando Mayor Levi Edma Sr., who later allotted for the school a monthly donation consisting of two sacks of rice, vegetable seedlings and fingerlings for the children to raise in a pond.

There’s still much to do at Kèupiyanan, where Jorta is currently working on plans to build new facilities, like additional classrooms and toilets.

“I’ve been praying to the Lord to use me as a teacher-missionary,” he said. “I guess this is God’s answer.”