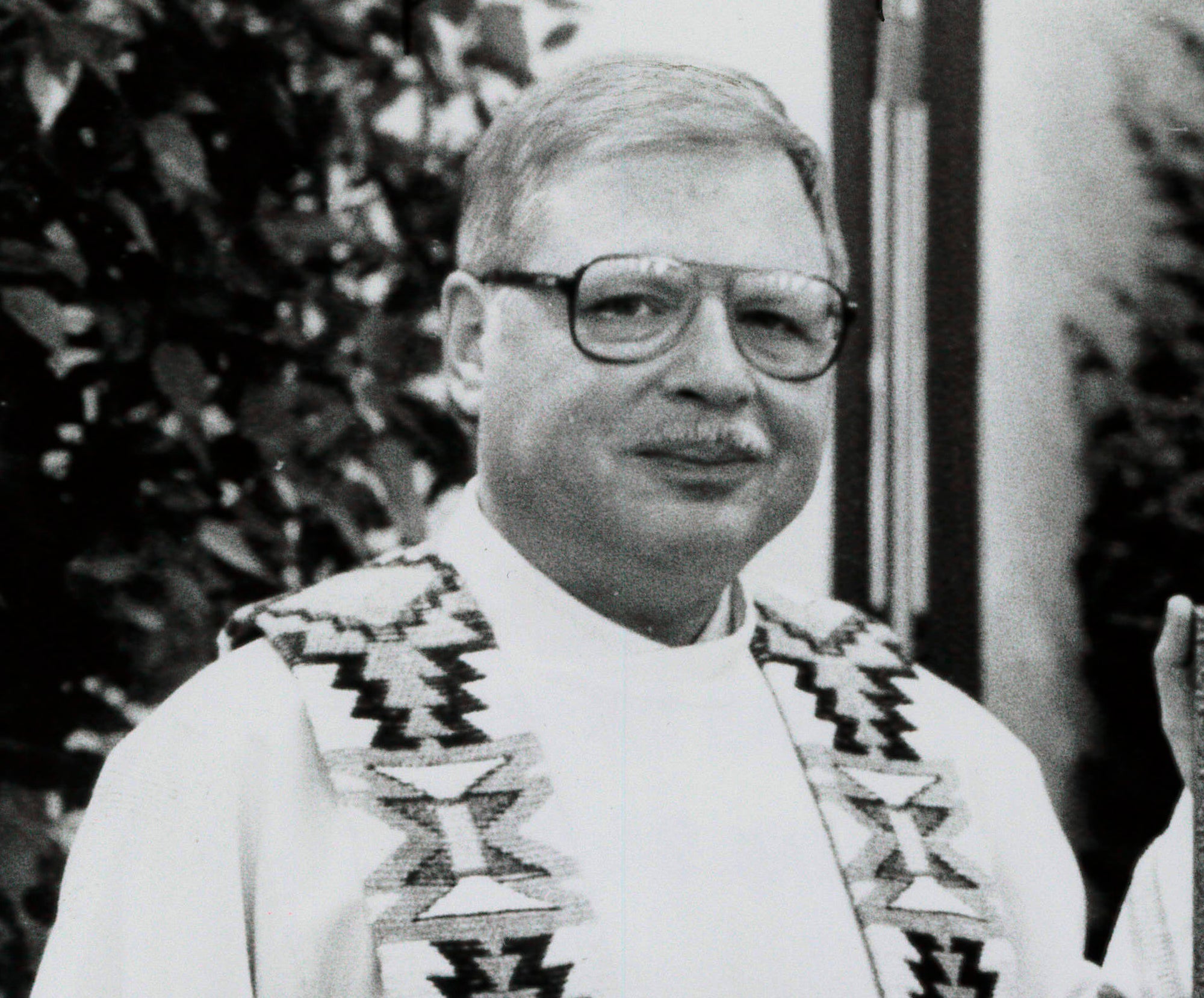 FILE – This 1989 file photo shows Father Arthur Perrault in Albuquerque, N.M. The former Roman Catholic priest found guilty of aggravated sexual abuse in New Mexico is scheduled to be sentenced Friday, Sept. 13, 2019, in Santa Fe. Federal prosecutors are requesting a sentence of more than 30 years in prison for Perrault, once a pastor at an Albuquerque parish and a chaplain at Kirtland Air Force Base. The 81-year-old maintained his innocence throughout his trial in April. (The Albuquerque Journal via AP, File)

SANTA FE, N.M. — A former Roman Catholic priest who fled the country decades ago was sentenced Friday in New Mexico to 30 years in prison after a jury found him guilty of sexually abusing an altar boy at a veterans’ cemetery and military base.

In ordering the sentence, U.S. District Judge Martha Vazquez said it was the worst case of child sex abuse she has handled over the course of 26 years.

At one point, the judge demanded that 81-year-old defendant Arthur Perrault look a woman in the eyes as she testified about being abused by him.

The judge also condemned Perrault for only being concerned about his sexual needs.

“You chose as a profession the life of being a priest. It was supposed to be your job to help, not destroy,” she said.

Prosecutors had asked the judge for special consideration of a life sentence for Perrault, once a pastor at an Albuquerque parish and a chaplain at Kirtland Air Force Base.

He was convicted in April of six counts of aggravated sexual abuse and one count of abusive sexual contact with a minor under 12.

“It is a long sentence but certainly a fitting one given the length of his conduct and devastating impact,” U.S. Attorney John Anderson said.

Perrault pleaded not guilty after he was returned to the U.S. from Morocco in 2017 and maintained his innocence at the sentencing. His defense team plans to file an appeal.

The abuse counts stemmed from the treatment of one boy at Kirtland Air Force Base in Albuquerque and at Santa Fe National Cemetery. The two sites are within federal jurisdiction, which allowed U.S. authorities to file charges with no statute of limitations.

Several people who were not involved in the specific charges were allowed Friday to recount abuse by Perrault and describe their emotional and mental anguish.

Elaine Montoya said her first kiss came from Perrault at the start of a two-year sexual relationship.

“He had convinced me that it was normal … a gift from God,” she told the court.

Charles Starzynski said his first sexual experience was with Perrault instead of any of the girls he liked. He called the former priest a con man concerned only with his image of sophistication.

In his only comments, Perrault said he had not made initial eye contact with the people who testified because he is hard of hearing and was watching a computer to read transcriptions of what was being said.

He declined several opportunities to make other remarks.

Authorities say their decades-long pursuit of Perrault led them to Morocco — a country that does not have an extradition treaty with the United States — and showed how far they were willing to go to seek justice.

Perrault was in jail at the time and Moroccan officials decided to honor an arrest warrant presented by U.S. authorities.

Perrault is among more than 70 clergy members identified by the Santa Fe Archdiocese as credibly accused of abusing children in New Mexico.

The archdiocese is in bankruptcy proceedings as a result of the abuse scandal.

Perrault first arrived in New Mexico in the 1960s after church officials in Connecticut sent him to a center that treated priests accused of abuse. Located in the Jemez Mountains north of Albuquerque, the facility was operated by the Servants of the Paraclete religious order.

Prosecutors wrote in a recent court filing that they had tried Perrault on a “small fraction” of his crimes, saying he had many more victims. At trial, several men testified that he abused them as children in his car, a church rectory and other locations.

The victim at the center of the prosecutors’ case said Perrault took him on excursions to amusement parks and to the military base in Albuquerque and had touched him inappropriately as many as 100 times starting when he was 10.

The abuse ended in 1992, the year Perrault left the state. An attorney had been preparing two lawsuits at the time against the Archdiocese of Santa Fe alleging Perrault had sexually assaulted seven children.  /muf

Read Next
Ohio gamer sentenced to 15 months prison in ‘swatting’ case
EDITORS' PICK
Someone from the Philippines can become $356 Million richer this Tuesday
Cherry Mobile teams up with Cloud Panda PH, launches online store
Trump took shelter in White House bunker as protests raged
Calida attends House hearing on ABS-CBN franchise
Leveling up your ‘lutong bahay’ with the kitchen companion you never knew you needed
WATCH: Edsa traffic blues on GCQ Day 1
MOST READ
‘If I had not been SolGen, I will make you eat your words,’ Calida tells Coco Martin
5 car dealership outlets shutting down
Calida says he is not ‘at loggerheads’ with Congress on ABS-CBN issue
WATCH: Edsa traffic blues on GCQ Day 1
Don't miss out on the latest news and information.