Bahamians look for loved ones as 1,300 missing after Dorian 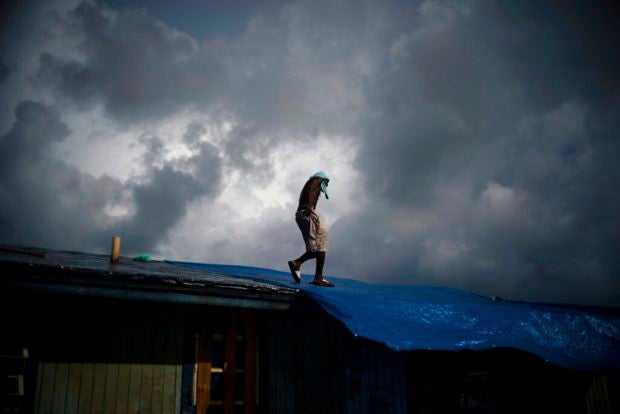 Trevon Laing walks the roof of his house to repair the damage made by Hurricane Dorian, in Gold Rock Creek, Grand Bahama, Bahamas, Thursday Sept. 12, 2019.  (AP)

MCLEAN’S TOWN, Bahamas — They scan social media, peer under rubble, or try to follow the smell of death in an attempt to find family and friends.

The government, which has put the official death toll at 50, has cautioned that the list is preliminary and many could be staying in shelters and just haven’t been able to connect with loved ones.

But fears are growing that many more died when the Category 5 storm slammed into the archipelago’s northern region with winds in excess of 185 mph and severe flooding that toppled concrete walls and cracked trees in half as Dorian battered the area for a day and a half.

“If they were staying with me, they would’ve been safe,” Phil Thomas Sr. said as he leaned against the frame of his roofless home in the fishing village of McLean’s Town and looked into the distance.

The boat captain has not seen his 30-year-old son, his two grandsons or his granddaughter since the storm. They were all staying with his daughter-in-law, who was injured and taken to a hospital in the capital, Nassau, after the U.S. Coast Guard found her — but only her.

“People have been looking, but we don’t really come up with anything,” Thomas said, adding that he’s heard rumors that someone saw a boat belonging to his son, a marine pilot, though the vessel also hasn’t been found.

He especially misses his 8-year-old grandson: “He was my fishing partner. We were close.”

The loss weighs on Thomas, who said he tries to stay busy cleaning up his home so he doesn’t think about them.

“It’s one of those things. I’m heartbroken, but life goes on,” he said. “You pick up the pieces bit by bit. … I’ve got to rebuild a house. I’ve got three more kids. I’ve got to live for them until my time comes.”

Meanwhile, a newly formed tropical depression headed toward the Bahamas and was expected to further drench the communities bashed by Dorian. The U.S. National Hurricane Center said the system could become a tropical storm by Saturday and hit the central and northwestern Bahamas with winds and heavy rains before moving along the east coast of Florida.

Kwasi Thompson, minister of state for Grand Bahama, warned that system will affect the entire island and urged people to seek shelter. “As previous storms have taught us, things change very quickly,” he said. “We want residents to take it seriously.”

The approaching storm was slowing down efforts to bring in aid, and food and water remained the biggest needs in the hard-hit Abaco islands, where officials temporarily suspended flights in anticipation of the storm, a spokesman for the islands’ National Emergency Management Agency said.

“Hang in there, we care for you, we will get to you,” spokesman Carl Smith said. “We are doing our best. … We ask people to have patience.”

Meanwhile, the search for loved ones in Abaco, which Prime Minister Hubert Minnis said were mostly decimated by Dorian, continued with renewed urgency. Diego Carey, a 25-year-old from the hard-hit community of Marsh Harbor, left Abaco for the capital, Nassau, after Dorian hit but returned Thursday after a 12-hour boat ride to search for two friends who remain missing.

“We were together during the storm. It happened so fast. The roof just blew off,” he said, adding that was the last time he saw them. “It’s so traumatizing.”

At least 42 people died in Abaco and eight in Grand Bahama, and Minnis has warned that number will increase significantly.

He assured Bahamians in a recent televised address that the government was working hard to recover bodies and notify families, adding that officials are providing counseling amid reports of nightmares and psychological trauma.

“The grief is unbearable,” the prime minister said. “Many are in despair, wondering if their loved ones are still alive.”

Still, reunions, although few, are happening nearly two weeks after the storm made landfall Sept. 1.

The family of Trevon Laing had thought the 24-year-old man was dead after a police officer told them that two bodies had been found in the community of Gold Rock Creek, including that of a young man. His mother went into mourning for five days.

When his family visited the community to verify what they were told, Laing wasn’t around, buttressing their fears that he was dead. When he returned, he said, he found his brother crying on the front porch.

Others who were reported missing and presumed dead were found in part thanks to the determination of people like Joyce Thomas, who did not stop searching for her brother, Bennett.

She traveled from Nassau to Freeport in Grand Bahama and then drove out to McLean’s Town, only to be forced to turn around because the street was still impassable. She tried again the next day and managed to reach the neighborhood where they grew up. There, she found only the foundation of his home. Her fear grew as she walked through the neighborhood.

Back in Nassau, she chastised their father for not doing enough to find his son.

“‘Go to NEMA, go to the police station,” she recalled telling him, referring to the islands’ National Emergency Management Agency. “Don’t just sit there. Do something.'”

“I wasn’t even eating until I heard my brother was OK,” Thomas said.

That came when she spotted him on a bicycle as she and her aunt drove again through McLean’s Town.

“I said, ‘Boy, come here! I miss you so much,'” Thomas told him as they clung to each other in a long hug. “I have other brothers, but this is my heart.”