A mother’s lament on Duterte’s drug war: ‘Only those in slippers are killed’ 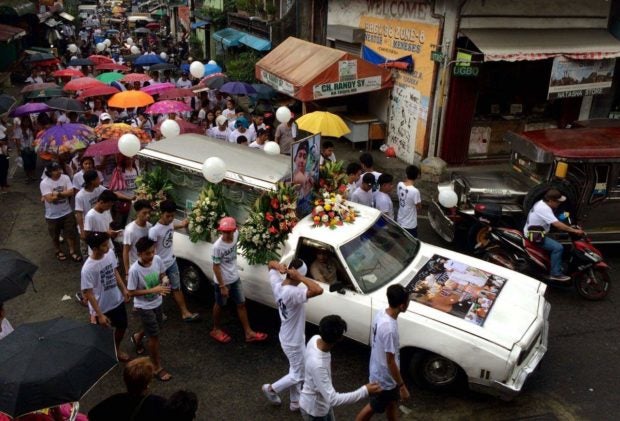 Funeral march for John Jezreel David in his neighborhood in Tondo, Manila. David was an alleged drug peddler killed during a shootout with police during a buy-bust operation last month. LYN RILLON/Philippine Daily Inquirer

MANILA, Philippines — Death came swiftly for 21-year-old John Jezreel David in the hands of policemen in Manila but the family’s quest for justice is moving ever so slowly two years after.

“We do not lose hope. No matter how long the justice system takes, we still hope to gain justice for John,” Katherine Bautista, John’s stepmother, told INQUIRER.net in an interview, speaking in Filipino.

“It was difficult to accept that you took care of someone whose life would be gone in the blink of an eye,” Bautista added.

Bautista last saw her stepson leaving for work not knowing that the next time she sees him would be at the morgue.

On January 18, 2017, John went to his work in Pasay City. Bautista said John was supposed to come home in the morning of January 19 but by afternoon she had lost contact with John.

Bautista and her husband, Denisse David, went to visit John’s workplace to ask his supervisor where he is. The supervisor said John left work around 10 p.m. with a workmate, Kim Ocenar.

Without a clue about where John was, the couple returned home. A neighbor in Tondo told Bautista that a group of policemen and village officials came to their home on January 20 to ask about young inmates who owned a motorcycle.

Bautista immediately inquired with village officials, who informed her that the youth detainees were at the Manila police station 11.

Bautista and her husband went to several police stations to look for John. When they checked a jail cell at Manila police station 11, an inmate told them about some individuals who were killed in Binondo.

She still recalls what the detainee told her: “There were three victims of Oplan Tokhang that were brought to Del Pan, Binondo. Your son might be there.”

This made Bautista worry as she recalled John narrating how some men flagged him at a checkpoint in Binondo. John was aboard his motorcycle and unidentified men on Jones Bridge blocked his path and forced him to cough up money or coffee sachets.

A check made by one of the officers of spot reports confirmed that three men, believed to be aged 30, 35 and 40, had been killed in an anti-drug operation in Binondo. Police told Bautista and Denisse to check the Cruz Funeral to see if John was one of those killed.

At the Cruz Funeral in Blumentritt, Manila, Bautista and Denisse met the mortician who showed them photos he had saved in his phone of corpses that he had processed.

The couple took a first look. No, this is not John. They took another look. It was him. Bautista couldn’t hold back tears as she recalled how her stepson’s corpse looked like. His naked body bore five gunshot wounds.

Days after John’s funeral, Bautista said they went to listen to residents living in a slum area in Lara Street where three men, including John and his workmate Kim, were shot dead by police officers. One of the residents said police asked them to leave their houses and move to the basketball court.

After the area was cleared, police carried John, Kim and another man, who had their hands tied in their backs, and brought them to an old warehouse known as an “execution area.” Residents said at least seven people were murdered inside the warehouse.

A man who lived near the warehouse told Bautista how he heard screams and cries of the victims. Bautista said the man, a survivor, was able to hide from the policemen because he was sick.

The man said one of the victims begged, “Tell that to my father, sir.” Another pleaded: “Sir please just kill us instead of torturing us.”

Almost two years after Bautista’s husband filed cases against policemen who killed John, Bautista decried the slow pace of justice and stood firm in her belief that Manila Police District officers responsible for John’s killing should be jailed.

“We wish for a speedier processing of papers that we send to them,” Bautista said, referring to the Ombudsman. “We hope the outcome is good, not just dismissal of the policemen. We want them jailed. They should pay for what they did,” she said.

Bautista said the police officers filed a motion in February 2018 to dismiss the case, claiming that the operation that led to John’s killing was “legitimate.”

Bautista continued to dispute this. She said John’s killing was not legitimate, expressing doubt about another police claim that John was on the drug list.

“MPD station 1 covers our residence. If we received proof that John was on the drug watchlist, why did we receive it from MPD Station 11? We do not live there,” she said.

Bautista’s family is seeking help from religious organization Rise Up for Life and for Rights.

After filing the complaints, Bautista and her family were forced to live in Bulacan but they still fear for their lives as her husband saw one of the policemen involved in John’s killing.

“Maybe he could not remember us but we can still recall his face,” Bautista said referring to the policeman that her husband saw.

Even in Bulacan, Bautista said the nightmare of losing her stepson violently and in the hands of law enforcers continues to haunt her and her family.

“Even in Bulacan we still can’t feel safe because of the drug war killings in the country. As an individual, I am advocating for the end of this culture of death,” she said.

“Prove to us that your drug war is effective. That it is not anti-poor,” Bautista said.

“People wearing slippers are being killed not the big-time drug lords,” Bautista said.

Innocent and poor families are being tagged as “collateral damage” in anti-drug operations, Bautista said.

“We are one of those whom Duterte calls a collateral damage,” she said.

Bautista said she wished the police would take a closer look at the list of their drug targets.

“Investigate your targets. Don’t just place them in your accomplishment just to say you did something,” she said.

Latest data from the Philippine Drug Enforcement Agency showed that over 5,526 drug suspects were killed in anti-drug police operations from July 2016 to June 2019.

The PNP, however, is still denying that the government’s drug war is anti-poor, noting that 7,054 high-value targets were also arrested in the same period./TSB