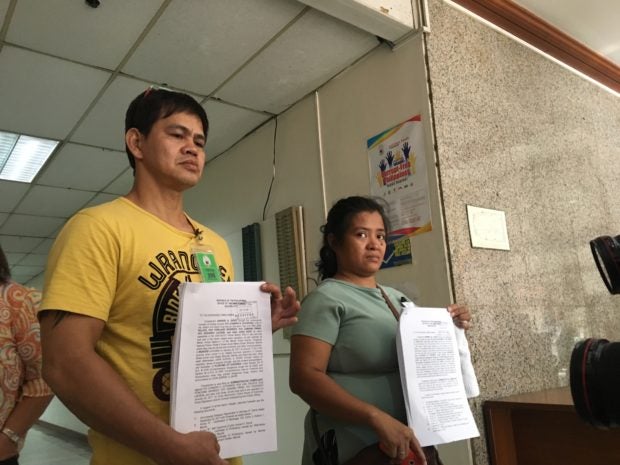 The parents of two young men killed in the government’s antidrug campaign have filed criminal complaints at the Office of the Ombudsman against seven Manila Police District officers.

A similar complaint was also filed against Police Senior Insp. Jojo Salanguit, PO3 Gerry Geñalope, and three John Does over the May 18 killing of 23-year old epileptic Djastin Lopez.

Both complaints were filed with the assistance of the National Union of People’s Lawyers–National Capital Region. Human rights group Rise Up also held a mass outside the Ombudsman after the filing of the complaints. 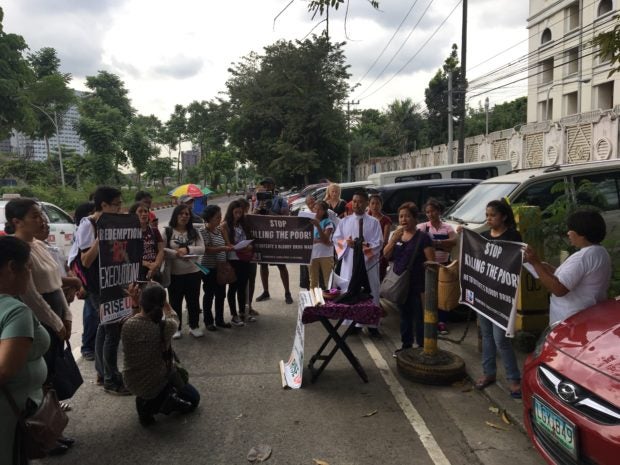 Human rights group Rise Up hold a mass outside the Office of the Ombudsman on Thursday, after the parents of two victims of the government’s antidrug campaign filed murder complaints against seven Manila Police District officers. Photo: Vince F. Nonato.

The parents of both victims denied they ever used drugs or owned firearms.

In his complaint-affidavit, David’s father Denisse narrated that he last saw the 21-year old motel roomboy when he left for work on the evening of Jan. 18. David failed to come home, and the father was informed by his supervisor that that he went with a fellow roomboy Kim Ocenar on the morning of Jan. 19.

On the morning of Jan. 21, Denisse heard that two policemen had approached their barangay tanod looking for the families of two roomboys detained at MPD Station 11.

But, his visit to the jail yielded nothing until a detainee supposedly shouted: “Kuya, may tatlong natokhang, dinala sa Delpan. Tingnan mo baka isa ang anak n’yo.” At the time, the police’s antidrug operations was called Oplan Tokhang.

Policemen at the homicide section of Station 11 later advised Denisse to go to Cruz Funeral Parlor to check the bodies of three men killed in Delpan. Denisse was even asked if his son used shabu (crystal meth), which he denied.

Denisse did find his son’s body at the funeral parlor, but he said he was not allowed to claim it until it was autopsied and he was allegedly made to pay P12,000. Meanwhile, John Jezreel’s valuables and his Yamaha Mio I motorcycle were nowhere to be found.

The father was furnished a spot report about an alleged buy-bust operation on Jan. 20, 11 p.m., at Delpan corner Lara Streets in Binondo, Manila. The three allegedly “fought back” and the police supposedly seized three guns, five plastic sachets of shabu, and P500 in marked money.

Denisse said he asked the residents living near Delpan and was told several policemen, some in plain clothes and masks, came to conduct an operation. Some purportedly saw a motorcycle carrying two men with the back rider in handcuffs. Shots were later heard.

He and the wife of David and Ocenar’s fellow casualty, George Yap, have already filed a case with the Commission on Human Rights in July, but it has yet to be resolved.

In her separate complaint-affidavit, Normita Lopez said her slain son had epilepsy and was even known as “Tirek” because of his condition. At 5 p.m. on May 18, Djastin said he would just go for a while to the Hermosa-Pilar railtracks.

Only an hour later, Normita was told to contact her son because of police presence in the railtracks. Her brother-in-law later informed him Djastin was killed, but the policemen did not allow her to approach the body and only told her to go to the barangay chairman. She only saw her son’s body at Archangel Funeral Homes the next day.

She said “many” have seen Djastin just talking with his friend, when plainclothes policemen approached them with guns. The friend was able to run and hide, but sickly Djastin could not go far.

Normita said one witness even told her that a policemen held Djastin up. He supposedly raised his hands and yelled “Huwag po, huwag po, suko na po ako.” But, the policemen supposedly shoved him and suddenly shot him, triggering a seizure.

She said witnesses even saw the policeman who shot Djastin slap him and shoot him several more times when he kept moving.