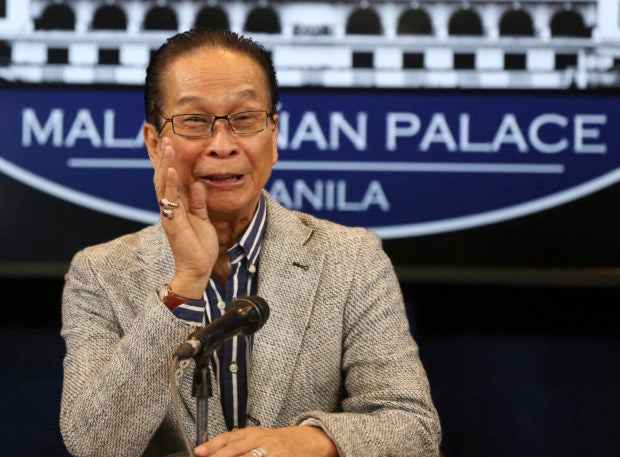 MANILA, Philippines — Even if President Rodrigo Duterte already said he “will ignore” the 2016 arbitral ruling on the West Philippine Sea in exchange for the country’s gas deal with China, his spokesman insisted Friday that he will never abandon the landmark decision.

Salvador Panelo, who serves as Duterte’s mouthpiece and chief legal counsel, said: “The President has not abandoned, nor is he abandoning, and neither will he ever abandon the favorable arbitral award issued by the Permanent Court of Arbitration in The Hague, more so with respect to our rights in the West Philippine Sea.”

He made the statement after Senior Associate Justice Antonio Carpio said that Duterte had no authority to abandon the verdict of the Permanent Court of Arbitration (PCA) in The Hague, Netherlands, which favored Manila’s case against Beijing’s nine-dash line that covers almost the entire South China Sea including the West Philippine Sea.

In a press briefing in Malacañang on Tuesday, Duterte said he “will ignore” the PCA decision in favor of a joint oil and gas exploration with China within the Philippines’ exclusive economic zone (EEZ).

“The exclusive economic zone is part of the arbitral ruling, which we will ignore to come up with an economic activity,” Duterte said.

Panelo, nevertheless, saw a different view on the President’s remarks. He said that what Duterte meant could be that the Philippines – for the meantime – will divert its focus “to something that would benefit our country in the midst of the impasse with China on our territorial dispute.”

“That is not to say, however, that we will totally forget about the said ruling and waive our sovereign rights as laid out therein,” he added.

Panelo even said that Duterte believes that the arbitral ruling is “final, binding and unappealable.”

“It is there forever and ever, as in forever. Not only is it carved in stone but it is as permanent as the sun rising on the east,” he said.

The Palace official then chided Carpio, saying the high court magistrate appears to “relish in finding fault in what the President says even if there is none.”

Panelo also pointed out Carpio’s declaration that he has no objections if the Philippines pursue a joint exploration with China, “stating that ‘the proposal of 60-40 in our favor would be a good start’ and admitting that, ‘despite everything, (Duterte) might be the President who will find the solution to the South China Sea dispute’.”