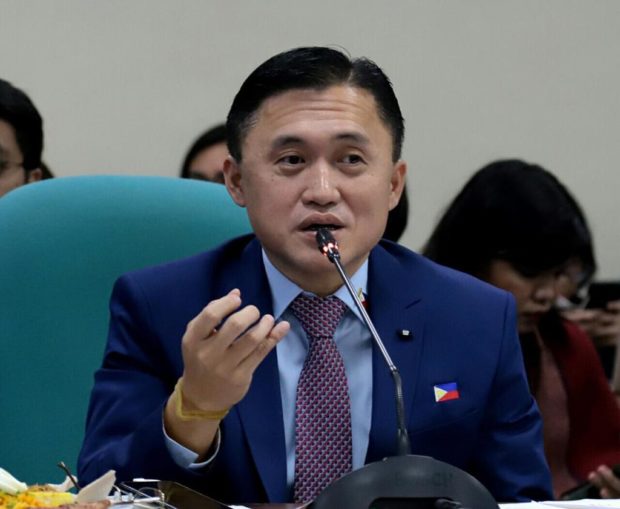 MANILA, Philippines–Malasakit Centers are a step closer to being institutionalized as the Senate conducted a hearing on Tuesday, September 10, on Senate Bill No. 199, otherwise known as the Malasakit Center Act of 2019, filed by Senator Christopher “Bong” Go.

Go wants Malasakit Centers to complement the implementation of Republic Act No. 11223, or the Universal Health Care (UHC) Act.  The Senator has been at the forefront in seeking to improve various medical and healthcare services of the government and making these services more accessible and affordable to the ordinary Filipinos.

“With this measure, we can further streamline and expedite the delivery of medical services to Filipinos, especially to those who need them most,” Go said in his opening remarks.

Aside from being the author of the bill, Go also presided the hearing as the chair of the Senate Committee on Health and Demography.

Go said that Malasakit Centers will address “out-of-pocket expenditures” incurred by patients and members of their family.

“The benefits under the UHC rely on health benefits package as determined by the PhilHealth. As such, out-of-pocket expenditures may still arise if the benefit packages are not enough to cover the medical needs of indigent and poor patients,” he explained, saying that this is where the services of Malasakit Centers come in.

“In 2017, despite the safety nets of PhilHealth, out-of-pocket payment accounted for 55% of health expenditures, according to the Philippine Statistics Authority,” he added.

So far, 41 Malasakit Centers have been established in different parts of the country since the first one was opened in Cebu in February 2018. Malasakit Centers operate as “one-stop shops” for patients to easily apply for financial assistance from various government agencies such as PhilHealth, Philippine Charity Sweepstakes Office (PCSO), Department of Health (DOH) and Department of Social Welfare and Development (DSWD).

Go said that he filed Senate Bill No. 199 to “ensure continuity of this program even beyond the Duterte administration.”

He also said that if the bill becomes a law, the government will be able to provide additional personnel in each Malasakit Center to cater to the needs of indigent patients nationwide.

At the Senate hearing, Go said that he thought of a one-stop shop medical assistance center due to the “very depressing” plight of patients who need help for their out-of-pocket expenditures.

In a Malasakit Center, patients need to fill out one request form only and the request is evaluated by representatives from PhilHealth, PCSO, DOH, and DSWD.

Go said that prior to the hearing, he had met with the heads of government agencies involved in the operation of these Malasakit Centers and it was determined that it is more feasible to start with the establishment of Malasakit Centers in all DOH-run hospitals.

Go added that to ensure quality of service, hospitals run by local government units that wish to establish their own Malasakit Center must meet certain requirements in order to make sure they have the capacity to implement the initiative and that the centers to be established will be able to respond to the medical needs of their constituents.

Representatives from key government agencies were also asked on their position regarding the proposed measure. The DOH, DBM, DSWD and PhilHealth are all supportive of the bill.

“The DOH would like to express its profound appreciation. The spirit and rationale of the proposed (Malasakit Center bill) seeks to make health services responsive and accessible to poor and indigent patients,” said DOH Secretary Francisco Duque III.

“We support the creation of a Malasakit office (in DOH-run hospitals), but we suggest creation of a director position instead of the proposed Malasakit national director position, and to be appointed by the President to be consistent with Civil Service rules,” said Maria Lourdes Aganon, assistant director of the System and Productivity Improvement Bureau of the DBM.

“DSWD expresses appreciation for how the Malasakit Center is being done in certain pilot areas. Our patients are now able to go to a center instead of having to go to the different regional offices to get their assistance,” said Luzviminda Ilagan, the DSWD Undersecretary for Policy and Plans.

“PhilHealth interposes no objection on the intention of the (Malasakit Center bill), and we fully support the bill,” said PhilHealth Senior Vice President Israel Francis Pargas.

Ricardo Samaniego, founder and CEO of Philippine Coalition of Consumer Welfare, also expressed his appreciation for the help that Malasakit Center has provided to ordinary Filipinos.

Senator Ronald “Bato” dela Rosa also expressed his support for the bill. He recounted that his two-year-old and 10-year-old siblings died from “simple” illnesses because his parents had no access to affordable medicines and healthcare services back then.

President Rodrigo Duterte has called Malasakit Centers in his past speeches as Go’s “brainchild,” as the initiative started when Go was still the Special Assistant to the President. /jpv