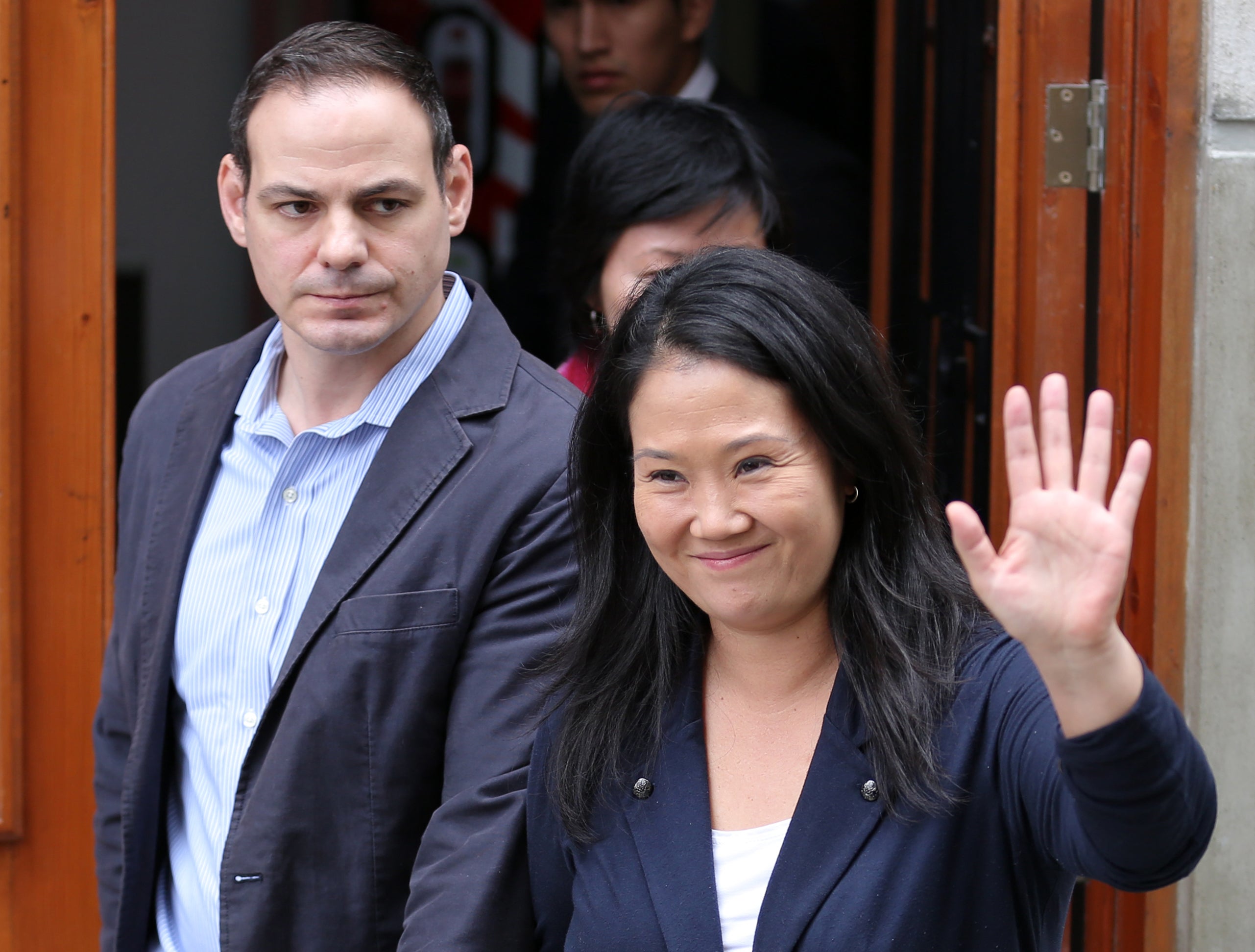 Peruvian opposition party Fuerza Popular (Popular Force) leader Keiko Fujimori (R) waves next to her husband Mark Vito as they leave after the hearing to decide whether or not she will be placed in preventive detention was postponed, in Lima on October 21, 2018. (Photo by Luka GONZALES / AFP)

LIMA, Peru — Peru’s Supreme Court on Thursday halved the pre-trial detention of Keiko Fujimori, paving the way for the opposition leader to leave jail in April of next year.

Fujimori, who is detained at a women’s prison south of the capital Lima, had petitioned the court for an immediate release, and her lawyer said she would appeal the Supreme Court ruling to the Constitutional Court.

“We are going to exhaust all avenues,” Guilliana Loza told reporters.

The eldest daughter of disgraced former president Alberto Fujimori, Keiko Fujimori is accused of accepting $1.2 million in illicit party funding from Odebrecht for her 2011 presidential campaign.

Once Peru’s most popular politician, Thursday’s decision theoretically gives her time to campaign for presidential elections slated for 2021.

However, President Martin Vizcarra has recently called for elections to be moved forward to April 2020 to overcome an institutional deadlock with an opposition-dominated Congress.

Though the debate over moving up the elections is still ongoing, polls have shown Fujimori’s support dropping to just nine percent since the scandal.

Thursday’s hearing came five days after Fujimori suffered heart problems that forced her to undergo tests, according to her Popular Force party.

On Thursday, the Supreme Court also halved the sentences of two of her aides linked to the scandal, Jaime Yoshiyama and Pier Figari.

Prosecutors have accused a total of 11 people linked to Fujimori’s party of running a criminal organization to raise money for her 2011 campaign.

Odebrecht has admitted paying at least $29 million in bribes to Peruvian officials since 2004.

Three former presidents are being investigated over Odebrecht while a fourth, Alan Garcia, committed suicide in April after police arrived at his house to arrest him for money laundering. /muf

Read Next
Democratic debate: Fiery exchanges over costs of health care
EDITORS' PICK
Seventh judge assigned to handle De Lima case
Beyond water service: Maynilad builds massive infrastructure projects to clean up Metro Manila waterways
Timeless Elegance in the Philippines’ Most Distinguished Home Kitchens
Museums ‘put to sleep,’ churches closed amid volcano’s unrest
PH preps for China virus: Question of when, not if
SM continues to send relief assistance to remote towns in Batangas
MOST READ
Lacson on Duterte’s threat to end VFA over Bato’s canceled visa: Where is the connection?
Part of Aurora Boulevard in Cubao closed from Jan. 25 – Feb. 1
Duterte threatens to scrap VFA if US doesn’t rectify Bato’s visa cancellation
PH preps for China virus: Question of when, not if
Don't miss out on the latest news and information.