‘That was my child’: Transgender deaths take toll in US 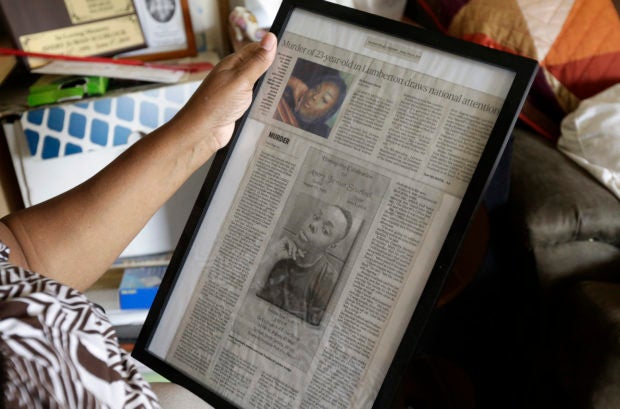 In this photo taken Tuesday, Aug. 6, 2019, Brenda Scurlock is shown in her home in Lumber Bridge, N.C. holding a newspaper clipping about her son’s murder. Scurlock’s son Avery Scurlock, who used the name Chanel when dressing as a woman in social settings and hoped to have sex reassignment surgery, was found shot to death in June. This death of a transgender person in North Carolina is one of 18 so far this year, and 17 of the victims have been black women. (AP Photo/Gerry Broome)

That was Brenda Scurlock’s last text from her son, Avery, before he was shot eight times, his body abandoned in a field in eastern North Carolina.

Scurlock had always worried about Avery’s safety. He was young and black in a society where those qualities could make him vulnerable.

And to multiply her worries, he was transgender.

Her fears came true on June 5, when the Robeson County Sheriff’s Office responded to reports of gunshots and found Avery Scurlock’s body. Friends said he was meeting a man he had met on a dating website.

Avery, 23, was one of 18 transgender people slain so far this year in the United States, according to the Human Rights Campaign. Seventeen were black transgender women, including two killed within two weeks of each other in South Carolina. A woman in Dallas who became a vocal advocate for transgender rights after she was attacked in April was killed in May in what the mayor described as “mob violence.” In Detroit, a black transgender woman and two gay men were killed in an attack that two other people survived.

The majority of transgender people killed yearly typically are black women, said Sarah McBride, the campaign’s national press secretary. “When transphobia mixes with misogyny and systemic racism, it can often have deadly consequences,” she said.

Although Brenda Scurlock supported her child and was accepting of his gender identity, she used male pronouns and always called him Avery, just as everyone else did. His friends said he insisted on his female name, Chanel, only when dressed as a woman in public. Because of that, The Associated Press is using Avery and male pronouns for the sake of clarity.

Avery told his mother about four years ago that he was gay.

“The way he dressed, you know, that was just him,” Brenda Scurlock said. 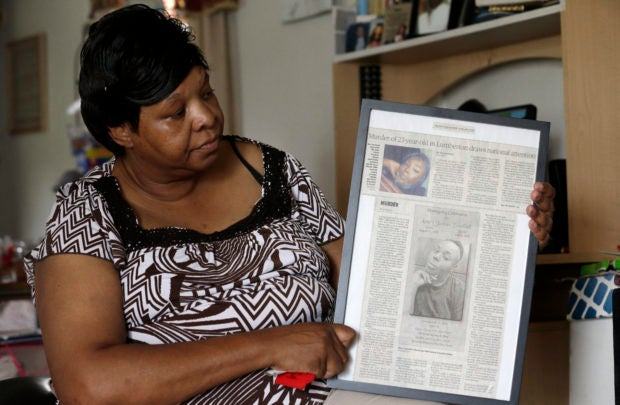 In this photo taken Tuesday, Aug. 6, 2019 Brenda Scurlock is shown in her home in Lumber Bridge, N.C. holding a newspaper clipping about her son’s murder. Scurlock’s son Avery Scurlock, who used the name Chanel when dressing as a woman in social settings and hoped to have sex reassignment surgery, was found shot to death in June. This death of a transgender person in North Carolina is one of 18 so far this year, and 17 of the victims have been black women. (AP Photo/Gerry Broome)

He would leave their home in Lumber Bridge in women’s clothes and makeup – he loved false eyelashes and his jean jacket.

On the evening of June 4, Avery told her he was going to a Chinese restaurant in nearby St. Pauls, then coming home. At 9:49 p.m., she texted him: “Are you Okay?” Two minutes later, he responded: “Yes Mommy.” She asked him to call or text when he was on the way home.

What Brenda Scurlock didn’t know was that Avery – presenting as Chanel – had connected with someone on a dating website who wanted to meet that night, said his best friend, 19-year-old Shania Aguirre. He left St. Pauls and first met with Aguirre at a hamburger joint in nearby Lumberton, Aguirre said.

They discussed the man who wanted to meet him, she said, and Avery told Aguirre that he had decided against it. She reminded him that another person whose friends said he was bisexual had been murdered in that same area in May 2018.

Then Shania uttered words that she wishes hadn’t come true: “I said if something happened, we’re not going to find out until the next morning or whenever.”

Aguirre said she left the restaurant parking lot about 11:50 p.m. Avery had pulled out a few minutes ahead of her. At 12:13 a.m. June 5, she texted him and got no response. A few hours later, she said she learned police had responded at 12:07 a.m. to a report of shots fired.

About 20 minutes had passed since Aguirre saw her friend pulling out in his car, she said. Before leaving, he had asked to be godfather to her 2-year-old daughter and told her he wanted eventually to have sex-reassignment surgery, she said.

Avery’s absence leaves an empty place in Aguirre’s life. She said she alternates between being too depressed to leave her home and too afraid.

“He was very supportive, always there,” she said. “We were there for each other.”

Meanwhile, Brenda Scurlock said she wants the death penalty for Javaras Hammonds, the 20-year-old charged with first-degree murder in Avery’s death. He’s being held without bond in the Robeson County Detention Center. Neither his attorney nor the district attorney responded to email or phone messages from the AP about the case.

She also said she wants authorities to charge Hammonds with a hate crime. However, Capt. Forest Obershea of the sheriff’s office said authorities believe robbery was the motive because Avery’s car and other belongings were stolen.

McBride, the Human Rights Campaign spokeswoman, said that’s another part of the safety issue for transgender people, who are more likely to live on the edges of society and take chances. While the killer might have planned a robbery, he also probably knew that a transgender woman named Chanel was more likely to risk meeting a stranger in the dark along a lonely road, McBride said.

Avery had told Aguirre he knew he took too many chances and worried his mother. He knew he had to change his ways soon, she said.

“I had told him not to meet up with anybody,” Brenda Scurlock said. “I told him it was dangerous.”

She’s learning more about what it means to be transgender and getting support from LGBTQ advocates, some of whom go to court with her. She’s determined to get justice for Avery’s memory.