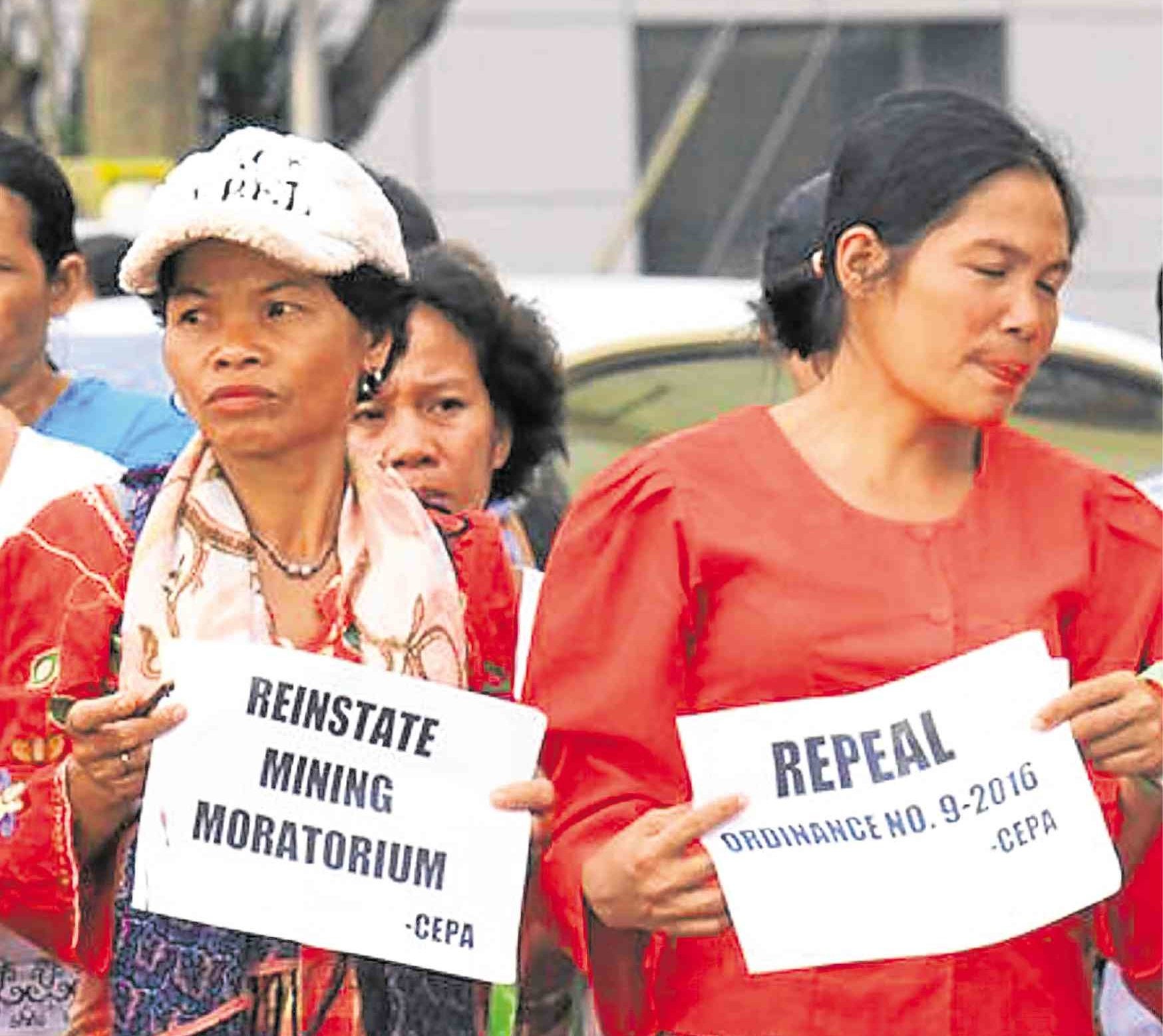 TRIBE’S VOICE Members of indigenous peoples communities in Capiz join a protest action in 2016 to call on the provincial board to reinstate a mining moratorium in the province. —PHOTO COURTESY OF CEPA

ILOILO CITY, Iloilo, Philippines — The provincial board of Capiz has listened to the clamor to reinstate a ban on large-scale mining operations in the province.

Provincial Ordinance No. 003, series of 2019, which imposes an indefinite moratorium on large-scale mining activities in the province was approved unanimously by 11 board members present during the board’s session on Sept. 3. The ban covers the 16 towns and the capital Roxas City, spanning a total land area of 2,596 square kilometers.

The Capiz Environmental Protection Alliance (Cepa), which led the continuous campaign to reinstate the moratorium, lauded the board for finally listening to the sentiments of the public.

“We welcome the ordinance and laud the provincial board members for standing up for the environment and the people’s interest,” said Darlene Surriga, Cepa advocacy officer.

“Our experience has shown that large-scale mining operations have not uplifted the lives of farmers and other residents of communities affected by mining. On the contrary, many have suffered from environmental destruction and health hazards,” she told the Inquirer.

On Aug. 27, 1999, the provincial board passed an ordinance declaring a 15-year moratorium on all large-scale mining activities and the acceptance and processing of all application for mineral agreements in Capiz.

These ordinances were considered landmark pieces of legislation, the first of its kind passed by a local government in the country and were hailed by environmental groups and advocates who had campaigned for the moratorium for more than two decades.

But just two days after the national and local elections in May 2016, the ordinances were repealed by the then outgoing provincial board.

The board said that it lifted the moratorium due to the economic and social benefits that Capiz would derive from mining activities.

But the city council of Roxas and municipal councils of at least seven towns issued separate resolutions against the lifting of the moratorium.

Environmental advocates led by Cepa pushed on with their campaign to convince the board to reinstate the moratorium. Their plea was finally heeded on Sept. 3.

“We should listen to the sentiments of the people who are saying no to large-scale mining,” board member Mateo Hachuela, author of the ordinance, told the Inquirer.

Hachuela, a first-term board member and chair of the board’s committee on environment, said that his committee conducted a public hearing on the ordinance on Aug. 23 and the overwhelming sentiment was to reinstate the ban.

“The people, especially those in communities that are affected by large-scale mining, are against the operations,” he said.