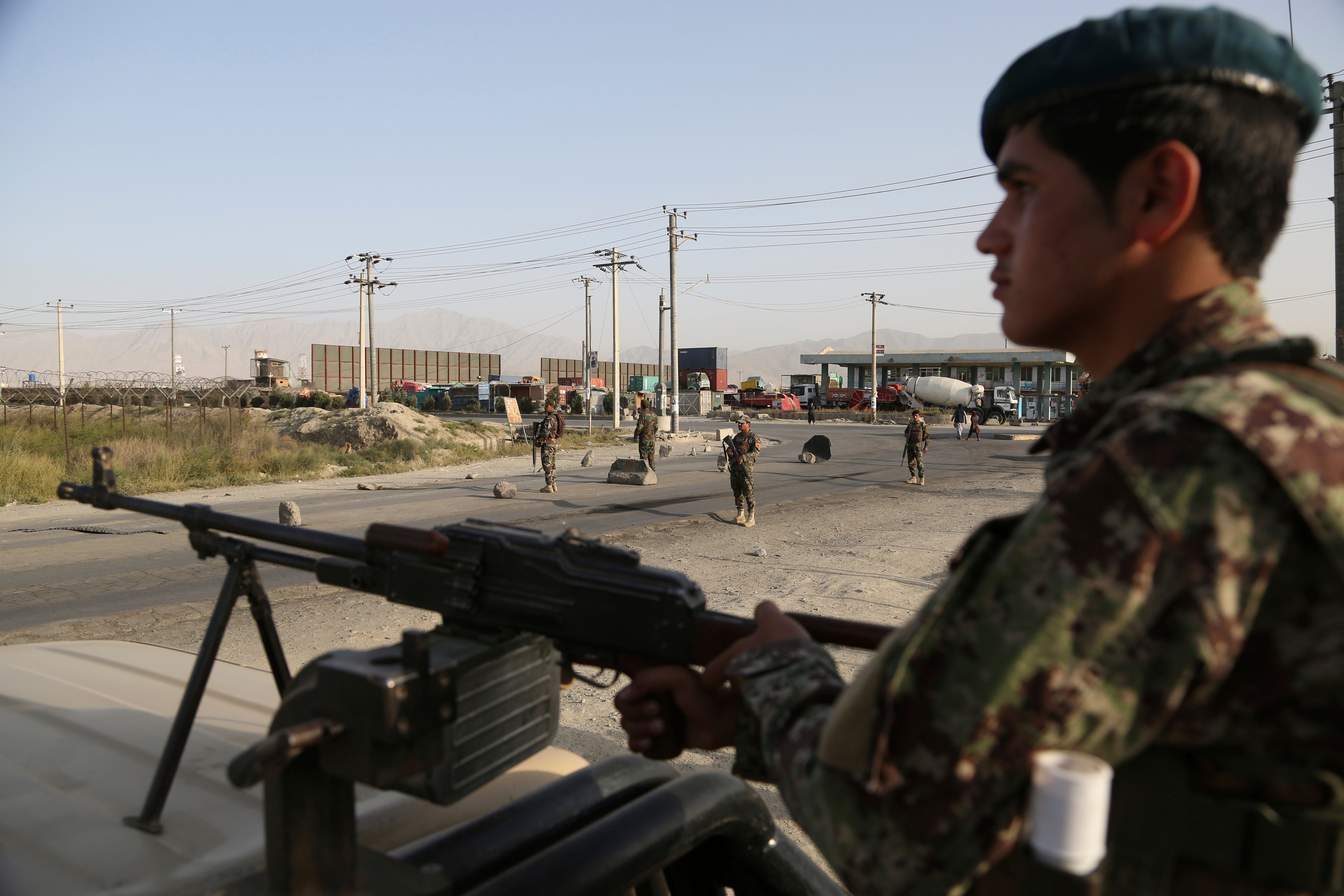 In this Tuesday, Sept. 10, 2019, photo, Afghan National Army soldiers stand guard at a checkpoint in Kabul, Afghanistan. President Donald Trump says U.S.-Taliban talks on ending the war in Afghanistan are “dead,” deeply unfortunate wording for the Afghan civilians who have been killed by the tens of thousands over almost 18 years. (AP Photo/Rahmat Gul)

KABUL, Afghanistan  — The sound of the blast ripped through Kabul, in an instant wrenching the Afghan capital’s attention from a nationally televised interview in which a United States envoy revealed the first details of a deal to end America’s longest war.

Last week’s Taliban car bomb targeted a foreign compound but instead shredded Afghan homes, with stunned and bloodied families picking up children and fleeing in darkness as their once-solid world collapsed. One family saw 30 relatives wounded — many of them women — including a son still healing from an attack the year before.

“Our only hope was peace,” Hayat Khan, the family’s 54-year-old patriarch, said Tuesday, “and that doesn’t happen now.”

President Donald Trump says the U.S.-Taliban talks on ending the fighting in Afghanistan are “dead,” deeply unfortunate wording for the Afghan civilians who have been killed by the tens of thousands over almost 18 years. Many fear his cancellation of negotiations will bring more carnage as the U.S. and Taliban, as well as Afghan forces, step up their offensives and everyday people die in the crossfire.

As America on Wednesday mourns thousands of civilians killed in the 9/11 attacks, weary Afghans watch their own toll from the aftermath continue to rise.

“Here innocent people are killed and there is bloodshed everywhere. Families lose their sons, mothers, even their livestock, but no one cares about it,” Khan said, a bandage still around his head from the blast. “Who remembers them? Are they not humans?”

The idea that Trump in a series of tweets over the weekend would call off a deal on the brink of completion, citing the Taliban’s killing of a U.S. service member in another Kabul blast last week, has struck many Afghans as incomprehensible.

“There are attacks every day,” said Khan’s 26-year-old son, Zaki, who walked The Associated Press through the family’s ruined home. A relative held up a phone to show a photo of Zaki, dusty and bleeding and clutching a child, shortly after the blast. “Why doesn’t he care about the killing of hundreds of civilians here?”

This also would be Afghanistan’s longest war, if the fighting in the country had ever truly ended. Instead, Afghans have been plunged into various conflicts over the past four decades, from a Soviet invasion to a warlord-led civil war to the Taliban’s arrival that ushered in a harsh version of Islamic law.

The collective deaths, in the hundreds of thousands, are being remembered in Martyrs’ Week that continues through Sunday. Across Afghanistan, fresh graves are dug every day. And all sides — the Taliban, U.S. and Afghan forces — are to blame.

For the first time, more Afghan civilians have been killed by international and Afghan forces than by the Taliban and other insurgents, the United Nations said of the first three months of this year, with thousands more wounded by insurgent attacks. The toll has been largely due to stepped-up airstrikes by the U.S. as it aids Afghan ground forces in their efforts to dislodge

Taliban fighters and those with the local affiliate of the Islamic State group.

The CIA-trained Afghan special forces also have been criticized, including by the U.N., for heavy-handed raids on Afghan homes that often turn deadly and alienate the local population. This month the Afghan intelligence chief was forced to resign after those forces killed four brothers

in a raid in the eastern city of Jalalabad. They had no known links to insurgents.

“As a responsible state we have zero tolerance for civilian casualties,” Afghan President Ashraf Ghani said in announcing the resignation.

The collapse of the U.S.-Taliban peace efforts has turned quickly to talk of more war on all sides. The Taliban, while signaling they were still open to negotiations, said they would continue their fight against foreign “occupation.”

The Afghan defense ministry’s deputy spokesman, Fawad Aman, confirmed on Tuesday that offensives against the Taliban have increased across the country in recent days.

For the U.S., Secretary of State Mike Pompeo asserted that more than 1,000 Taliban had been killed in battle during the past 10 days — an estimate that could reflect Afghan efforts as fighting intensifies ahead of this month’s presidential election and the end of the “fighting season” before winter. And Trump, on the defensive after critics accused him of upending the talks in favor of rash showmanship, asserted that “we’ve hit the Taliban harder in the last four days than they’ve been hit in over 10 years.”

There has been no evidence to back up his statement. But the U.N. envoy to Afghanistan, Tadamichi Yamamoto, told the U.N. Security Council on Tuesday that violence had intensified.

All parties must reduce civilian casualties “to demonstrate their seriousness for peace,” he said.

The talk of even fiercer fighting has anguished some in Afghanistan. “Stop breaking more hearts! The escalation in violence from all sides won’t have a winner,” Omaid Sharifi, the founder of an art project that now paints concrete blast walls with thousands of tulips to remember the dead, said Tuesday on Twitter.

And after an air raid was blamed in the deaths of seven family members in Maidan Wardak province this week, the Afghanistan Independent Human Rights Commission said that “such inattention and carelessness on the part of the international military forces would result in people’s wrath and anger” and urged Afghan officials to investigate why such events repeatedly occur.

The family members had been returning from a memorial ceremony when they were killed, said Sharifullah Hotak, a provincial council member. With offensives stepping up in the wake of

Trump’s decision, he said, “unfortunately, both sides of the battle will cause more civilian casualties.”

A new report by the Uppsala Conflict Data Program shows how many have died this year alone. Just over 450 Afghan civilians were killed in the cross fire between state and insurgent forces or in attacks on government institutions in the first six months, it said. Another 100 civilians were killed in “one-sided violence” such as suicide attacks against purely civilian targets such as weddings.

Part of the tragedy in Afghanistan, some say, is that families are battered over and over.

For Khan, the blast that scattered his loved ones was the third attack in the past two years.

“Whenever I build my house,” he said, “it is destroyed again.”  /muf