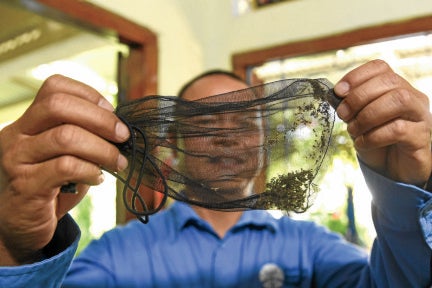 PROMISING RESULTS A bag of mosquitos is held for examination by a field worker from the World Mosquito Program, a nongovernmental organization that has pioneered the Wolbachia method of fighting dengue in Vietnam. —AFP

HANOI/NHA TRANG, VIETNAM — Hundreds dead in the Philippines; a threefold increase of cases in Vietnam; hospitals overrun in Malaysia, Myanmar and Cambodia — dengue is ravaging Southeast Asia this year due in part to rising temperatures and low immunity to new strains.

Cases have surged across the region with around 670,000 infected and more than 1,800 people dead, according to an Agence France-Presse (AFP) tally of national and World Health Organization (WHO) data.

Dubbed “breakbone fever,” dengue is one of the world’s leading mosquito-borne illnesses and infects tens of millions across the globe annually.

Around half of the planet’s population live in at-risk areas, mainly in Latin America, Africa and Asia.

So what is dengue, how does it spread, and how can it be contained?

Dengue is transmitted mainly by the Aedes aegypti mosquito, which thrives in densely populated tropical climates and breed in stagnant pools of water.

The mosquitoes pick up the virus from infected humans, even asymptomatic ones, and pass it along to other people through bites.

Infections have steadily climbed across the globe since the 1970s due to rising temperatures and irregular monsoon rains linked to climate change, which allow for ideal mosquito breeding conditions.

Dengue is mostly found in crowded areas, and breakneck urbanization across the globe has helped the virus thrive, especially in fast-growing megacities like Manila, Rio de Janeiro, Ho Chi Minh City and Tegucigalpa.

A massive boom in international travel and trade has also expanded dengue’s footprint, allowing the virus to be carried across the globe in a matter of hours.

Once confined mostly to cities in tropical climates, dengue is now found in at least 125 countries across the world, with around 100 million infected every year, according to the journal Nature Microbiology.

Even the widespread use of plastics has contributed as things like garden pots and takeout containers collect water, creating perfect breeding pools for mosquitoes.

It’s most serious and deadly in children, especially young girls, though scientists don’t know why.

Contracting one of dengue’s four strains gives immunity only to that particular one. Picking up a different strain, called a serotype, later usually causes a worse infection than the first.

With no known treatment, doctors can only help to ease the virus’ brutal symptoms, which can last weeks and often renders patients completely immobile.

The disease is cyclical. Dramatic outbreaks occur every few years, but climate change is believed to have contributed to a spike in cases in 2019, with July clocked as the warmest on record.

In Southeast Asia insecticide fogging is commonly used to kill mosquitoes, but they usually return after a few days, and insects can quickly become resistant to the chemicals.

A controversial vaccine developed by French pharmaceutical firm Sanofi Pasteur has been greenlit for use in 21 countries and the European Union but it’s far from perfect.

The Philippines was one of the first countries to use the vaccine, called Dengvaxia, in a mass immunization program, but its fumbled rollout in 2016 has been blamed for the deaths of dozens of children and led to its eventual ban.

Several countries are also trialing the so-called Wolbachia method. First trialed in northern Australia, it’s been tested in nine countries around the globe, including in Vietnam where early results are promising.

The World Mosquito Program (WMP) pioneered the method where male and female Aedes aegypti mosquitoes are infected with the disease-resistant bacteria before being released into the wild.

In a matter of weeks, baby mosquitoes are born carrying Wolbachia, which acts as a disease buffer for the bugs making it harder for them to pass on not only dengue, but Zika, chikungunya and yellow fever.

Since the trials, dengue cases are down 86 percent in Vinh Luong, a crowded dengue-prone district in southern Vietnam.

Wolbachia was first discovered by scientists in the 1920s in mosquitoes living in the drainage system beneath the Harvard University School of Public Health.

Found in 60 percent of all insect species including dragonflies, fruit flies and moths, the bacteria was mostly ignored until the 1970s when researchers discovered it could be used to prevent the spread of disease by bugs.

Other groups, including in Singapore and Malaysia, are using Wolbachia but only in male mosquitoes who render female eggs infertile—a method that aims to suppress the mosquito population, which rarely lasts.