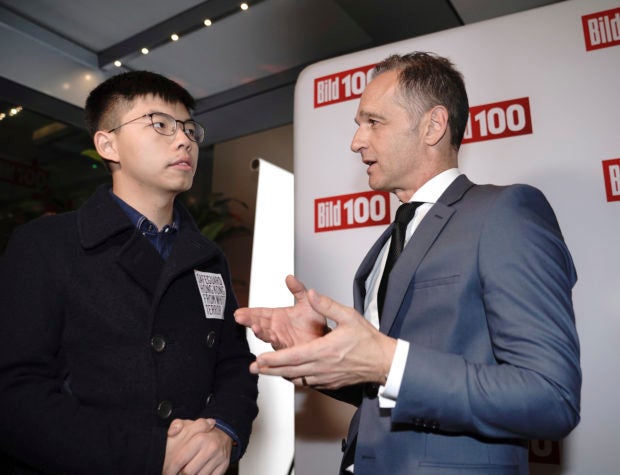 Foreign ministry spokeswoman Hua Chunying said Tuesday that China has complained to Germany about Wong’s current trip to the European country and his meeting with Foreign Minister Heiko Maas.

She called Wong a separatist and said Germany had allowed him to enter “to engage in anti-China separatist activities.”

Wong and Maas met in Berlin late Monday at an event hosted by the German newspaper Bild.

Hua said no foreign government has the right to intervene in Hong Kong affairs because they are an internal Chinese matter. She urged Germany to avoid sending the wrong signal to “radical, separatist forces in Hong Kong.”

Meanwhile, Hong Kong leader Carrie Lam has renewed an appeal to pro-democracy protesters to halt violence and engage in dialogue, as the city’s richest man urged the government to provide a way out for the mostly young demonstrators.

The government last week promised to axe the extradition bill that sparked the three months of protests but failed to placate protesters, whose demands also include democratic reforms and police accountability.

Lam said Tuesday the escalation of violence over the weekend, where over 150 people including students were detained during clashes, will deepen rifts and prolong the road to recovery.

Billionaire Li Ka Shing said in a video broadcast on local TV that the government should temper justice with mercy. The 91-year-old Li described the unrest as the worst catastrophe since World War II. /kga

ADVERTISEMENT
Read Next
Dela Rosa: 2 inmates in and out of Bilibid hospital for years
EDITORS' PICK
SM prepares for ‘safe malling’
Leveling up your ‘lutong bahay’ with the kitchen companion you never knew you needed
Notice of 2020 regular meeting of stockholders June 18, 2020
P2.2 trillion in losses: Cost of COVID-19 impact on PH economy
NBI, Immigration to join hunt for ‘underground’ medical clinics
2 Chinese nationals arrested in raid on another unlicensed COVID-19 hospital in Pampanga
MOST READ
Revillame tells Roque: ABS-CBN is in my heart despite being in rival network
NCR is ready for GCQ — Palace
LOOK: Robredo, Vico Sotto, check Community Mart ops in Pasig
Año: Quarantine passes not needed in GCQ, movement restricted to essential travel
Don't miss out on the latest news and information.