In Cambodia, witchcraft violence down but still a concern 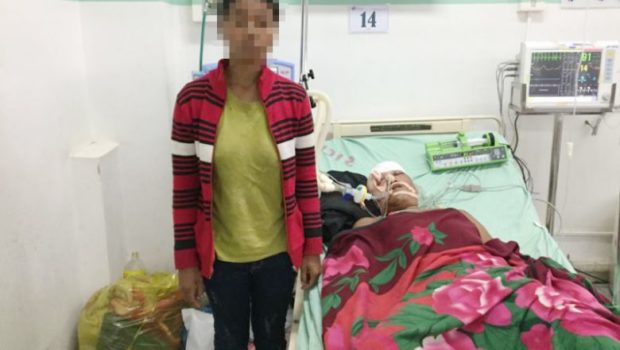 A woman cares for her husband at the Khmer-Soviet Friendship Hospital in 2017 after he was shot for allegedly practising sorcery. Post staff via The Phnom Penh Post/Asia News Network

PHNOM PENH — Witchcraft-related human rights violations have decreased but remain an area of concern in some remote parts of Cambodia, the Office of the UN High Commissioner for Human Rights (OHCHR) said.

“Between 2012 and 2018, the OHCHR documented 49 witchcraft-related cases, among which 35 involved killings and 14 attempted killings or harassment,” the UN body’s Popular Justice report said.

The 35 deaths were among 73 reported cases of mob violence between 2010 and 2018 that resulted in 57 people being killed.

The report said that among the 35 documented cases of deaths between 2012 and 2018, three of the victims were women.

It said the Ministry of Interior had reported 16 cases of mob violence, with eight people being killed following accusations of practising witchcraft between January 2017 and June 2019.

“The killings, beatings, harassment or eviction of people accused of practising ‘black magic’ or witchcraft is not uncommon in Cambodia, where people identified as witches become scapegoats for a variety of problems in a village.

“These include suspicious misfortune, [experiencing] pain, sickness and death,” the report said.

It said sorcery allegations may also be linked to poverty and exclusion. More cases occurred in specific geographical locations linked to a lower level of economic and social development, or areas that were less accessible.

“For example, there are a higher number of cases in specific districts in Takeo, Kampong Speu and Pursat provinces that remain difficult to access. In these remote areas, the poverty rate remains high,” it said.

In July last year, The Post reported a sorcery case in Kampot’s Kampong Trach district in which a family suspected of being sorcerers was forced to drink holy water and leave the village.

Prum Kim Cheu, the second deputy chief of Kampong Trach Khang Lech commune in Kampong Trach district, said on Monday that the family had since moved to Kep province.

The residents had stopped being suspicious of other people but still suffered ill health as they had before the family was forced to leave the village.

“Now when they are ill, they go to get treatment, but in the past, they had always attached their problems to the family that was forced to leave.

“In that case, there was no evidence [of them being sorcerers]. But people believed in the supernatural and did not get treated at a hospital,” Kim Cheu said.

Marie-Dominique Parent, OHCHR deputy representative and officer-in-charge, told The Post on Monday that the UN body was continuing to document and follow up on cases of witchcraft-related violence.

This was to ensure that cases were promptly investigated and sanctioned, and redress was provided to persons who had suffered harassment, beatings or eviction.

It was also to raise awareness of the relevant human rights and Cambodian law to prevent a reoccurrence of such violence.

“The office is currently discussing other follow-up action with the Cambodia Human Rights Committee, such as the further dissemination of the report and more systematic awareness-raising activities for local authorities and communities,” she said.

The OHCHR was working with the National Police to further circulate the report among judicial police officials.

Ministry of Justice spokesperson Chin Malin said on Monday that the decrease in witchcraft-related violence was due to joint measures taken by the government and civil society in raising awareness of the law and through education.

“Enforcement of the law, where perpetrators have been brought to face justice also contributed to this. So witchcraft-related violence has decreased as people understand more about the matter,” Malin said.