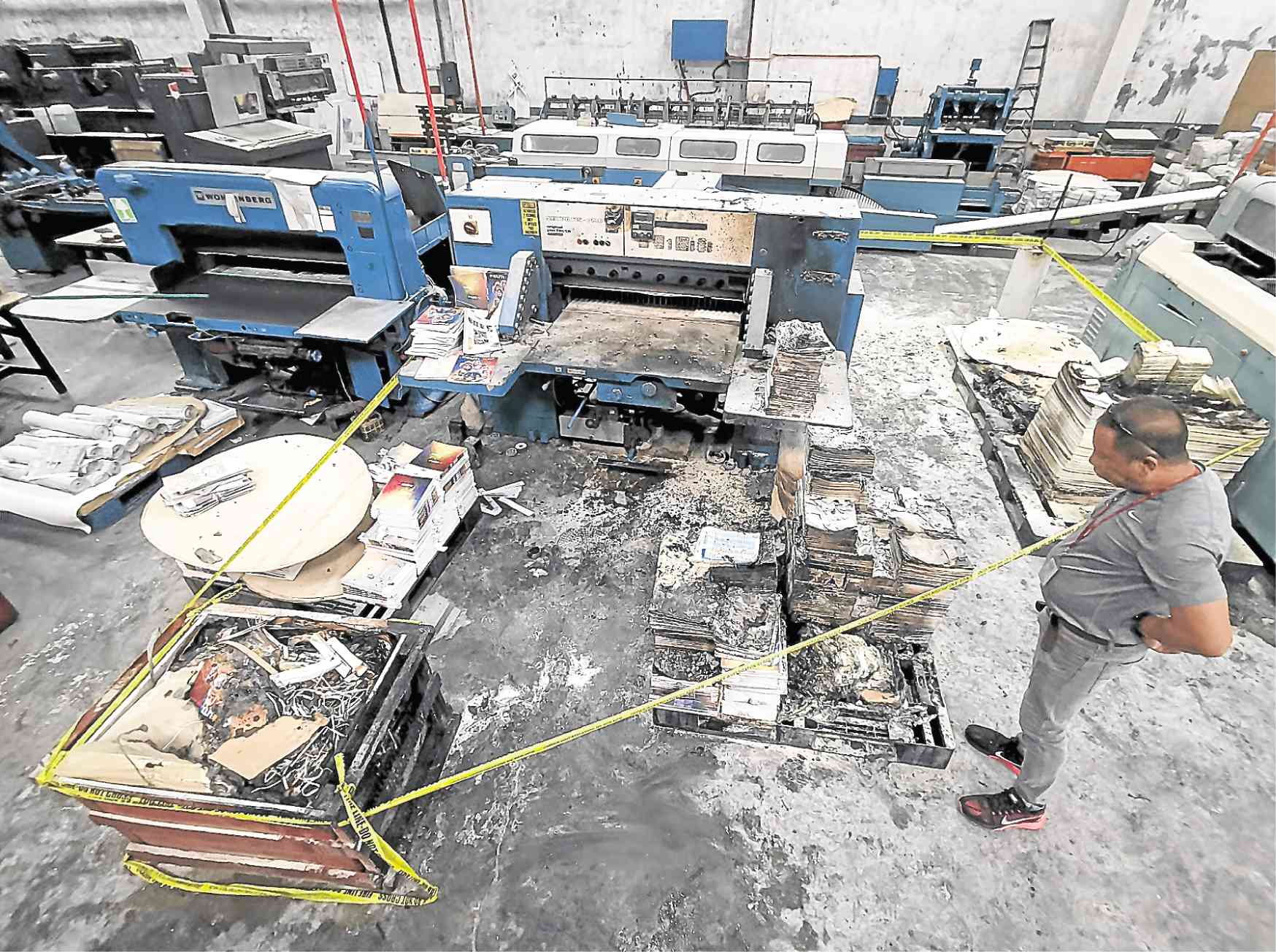 MANILA, Philippines — Four armed men barged into a national tabloid’s printing plant in Parañaque City and set fire to some print materials in what was described by the media outlet as an attempt to sabotage its operations.

Although the attack against Abante News took place at 1:57 a.m. on Monday, it took authorities around 12 hours to start a proper investigation after the incident was initially reported as a simple fire.

A report to Supt. Robert Pacis, the Parañaque City fire marshal, said the blaze started in the production area of Abante’s printing press at Fortunata Building I in Vitalez Compound, Barangay San Isidro.

Marivic Furaganan, one of the media outlet’s security personnel, told arson investigators that they were receiving a delivery of printing materials when four armed men barged inside and shouted, “Dapa, dapa, asan ang baril mo (Lie face down on the ground, where’s your gun)?”

As she was lying face down, the suspects poured gasoline on piles of newspapers and other printing materials worth P50,000 in the area and set these on fire.

In a statement, Ferdinand Jadulco, Abante’s managing editor, said that two tabloid staffers were injured during the attack launched by four masked armed men that lasted five minutes. But there was no mention of injured personnel in the fire marshal’s report.

Recovered from the production area were a 4-liter gallon jug that allegedly contained gasoline and the lighter believed to have been used to start the fire.

Initially, however, first responders had reported the incident as a simple fire, according to Col. Robin King Sarmiento, the Parañaque City police chief.

He said it was only around 2 p.m. on Monday when they were alerted that what happened could be a case of arson.

Brig. Gen. Guillermo Eleazar, the National Capital Region Police Office director, said he had already ordered security to be beefed up in the area though the deployment of more men.

The police have yet to determine the motive for what Jadulco called a “dastardly attack, the first violent act against our group and its facilities since 1987.”

But it appeared that the media outlet believed it was an “attempt to strike fear into our reporters, editors and staff.”

Jadulco said in his statement that they would be not cowed, saying: “Our commitment to hard-hitting journalism remains unshaken.”

The Inquirer tried but failed to reach out to Abante News for comment.

Read Next
METRO BRIEFS: Sept. 10, 2019
EDITORS' PICK
Taal Volcano and surroundings have become ‘inflated’
James Reid, Nadine Lustre confirm split
What exactly did Vilma Bautista — Imelda’s ex-aide — do?
China’s Xi says coronavirus outbreak must be taken seriously
‘A greener, cleaner tomorrow’: A how-to guide for Filipinos who want to help with today’s energy crisis
San Mig Light celebrates its 20 years in Poblacion
MOST READ
Taal Volcano and surroundings have become ‘inflated’
Ayala Land bares facts on Technohub deal: P4B in lease to UP
If Marcos runs in 2022 polls, he must accept results – Robredo
Pilot test of motorcycle taxis may be ended early
Don't miss out on the latest news and information.