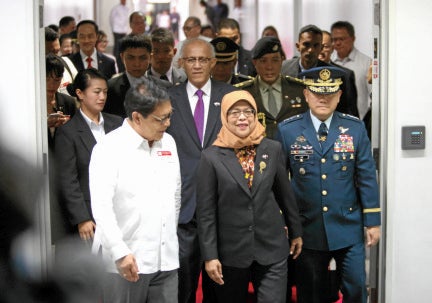 MANILA, Philippines — President Rodrigo Duterte will hold a bilateral meeting on Monday with visiting Singapore President Halimah Yacob, who is in the country for a five-day state visit.

Malacañang said the leaders would tackle areas of mutual concern in the interest of furthering political, economic, cultural and people-to-people engagement between the two countries.

“It will be the usual. In bilateral talks, you have discussions on trade, cultural exchanges, people-to-people exchanges, the usual,” said presidential spokesperson Salvador Panelo in an interview over dzIQ.

Halimah arrived in Manila on Sunday afternoon, upon the invitation of the President.

Halimah is Singapore’s first female president and the first Malay head of government in 47 years. She assumed office in September 2017 as the eighth president of Singapore.

Her state visit marks this year’s celebration of the 50th anniversary of the establishment of diplomatic ties between the Philippines and Singapore.

On Monday, Halimah will take part in a wreath-laying ceremony in Rizal Park, to be followed by a visit to the President in Malacañang.

The two leaders will engage in a tete-a-tete and an expanded bilateral meeting, after which they will sign agreements between the two nations.

During her stay in Manila, Halimah is expected to meet the Philippines-Singapore Business Council.

She is also scheduled to visit Davao City, where she will visit the Philippine Eagle Foundation and engage in a dialogue with the Mindanao youth.