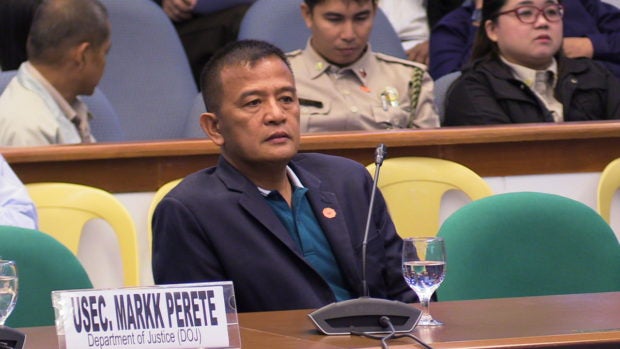 MANILA, Philippines – If the alleged “GCTA [good conduct time allowance]-for-sale” scheme is proven, sacked Bureau of Corrections (BuCor) Director General Nicanor Faeldon should be held accountable before the Office of the Ombudsman.

Barry Gutierrez, spokesperson of Vice President Leni Robredo, made this statement on Sunday, a few days after President Rodrigo Duterte fired Faeldon over the controversial implementation of the law that allowed the release of nearly 2,000 heinous crime convicts.

The case would have to be handled by the Office of the Ombudsman as the release of the convicts happened when Faeldon was still a public official, Gutierrez said during the “BISErbisyon LENI,” Robredo’s weekly show aired over AM radio DZXL.

Last Wednesday, the President ordered the Office of the Ombudsman to look into possible corruption in the release of the heinous crime convicts.

On Thursday, during a Senate hearing on the GCTA law, Yolanda Camilon testified that she paid P50,000 in exchange for the early release of her common-law husband, an inmate at the New Bilibid Prison. Her husband has not been freed.

The following day, Camilon revealed that families of convicts pay from P30,000 to more than P1 million for the early release of their relatives.

Before serving in the BuCor, Faeldon served as the chief of the Bureau of Customs, a post he resigned after a P6.4-billion shipment of crystal meth managed to slip into the country in 2017.

“Maybe later, after a week, a few months, maybe he’ll be back in [a government] position,” Gutierrez said in Filipino.

Last Friday, in a speech in Cebu, the President affirmed his trust in Faeldon.

“I still believe in him. It was he who informed me about some smuggled cigarettes. Because of that report, [the government] earned P37 billion,” the President said.