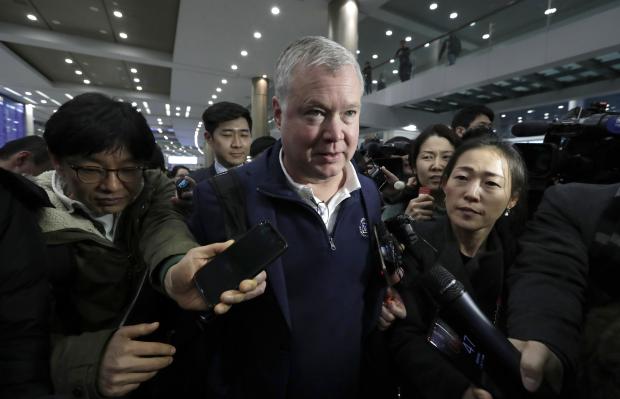 SEOUL — On Friday, US Special Representative for North Korea Stephen Biegun called on Pyongyang to resume talks with the US as agreed on by the two countries’ leaders.

The North, meanwhile, has been highlighting its close ties to China, and has issued several warnings to South Korea and the US.

“At this moment, to achieve further progress, the most important step we can take is for the United States and North Korea to work together to overcome the policies and demonstrations of hostility that compromise the simple ability of our diplomats to talk, and to sustain the rhythm of negotiations,” Biegun said in a speech at the University of Michigan. He added that the North must “set aside its search for obstacles to negotiations.”

US President Donald Trump and North Korean leader Kim Jong-un met at the border village of Panmunjom on June 30 and announced that working-level talks would resume. However, such talks have yet to materialize, and the North has become increasingly belligerent.

The North has fired a series of short-range projectiles, which the UN assesses to be part of the regime’s efforts to perfect intercontinental ballistic missile technologies. The UN has also revealed that the North is continuing activities related to its nuclear weapons program.

“We have made clear to North Korea: We are prepared to engage as soon as we hear from them. We are ready. But we cannot do this by ourselves,” Biegun said.

Biegun also warned that the international community will not accept the North’s possession of weapons of mass destruction and that nuclear-armed North Korea could prompt neighboring countries to seek nuclear armament.

“At what point will voices in South Korea or Japan and elsewhere in Asia begin to ask if they need to be considering their own nuclear capabilities? And what will this mean for a region whose prosperity and growth has been so inextricably tied to long-term stability and peace?” he said.

In South Korea, the issue of nuclear armament has resurfaced a number of times, voiced mainly by conservatives. Following the North’s recent actions, the idea has been raised again by lawmakers of the main opposition Liberty Korea Party, who have gone as far as to suggest exiting the Treaty on the Non-Proliferation of Nuclear Weapons could be considered.

Also on Friday, US Secretary of State Mike Pompeo reiterated that the US will ensure the North Korean regime’s security following its denuclearization.

“I’m very committed to working with the North Korean team to negotiate a set of outcomes that will be good for both the United States and the world in terms of reducing the nuclear threat that emanates from the Korean Peninsula, but also ensuring that security and peace and prosperity can come to North Korea as well,” Pompeo said in a radio interview.

While acknowledging that the North has a right to defend itself, Pompeo went on to say that regime security can only be achieved through denuclearization.

“Those nuclear weapon systems that North Korea has been driving towards for decades now don’t provide the security that the North Koreans believe they do,” he said, adding “coming to a set of understandings with the United States and with the world to denuclearize,” will provide the guarantees Pyongyang is seeking.

“And when they do so, we’ll provide the security assurances that are needed for them and for their people. Every nation has the sovereign right to defend itself. Then we can create economic opportunity and better lives for the people of North Korea as well.”