Qatar — the tiny Gulf state that could | Inquirer News

Qatar — the tiny Gulf state that could 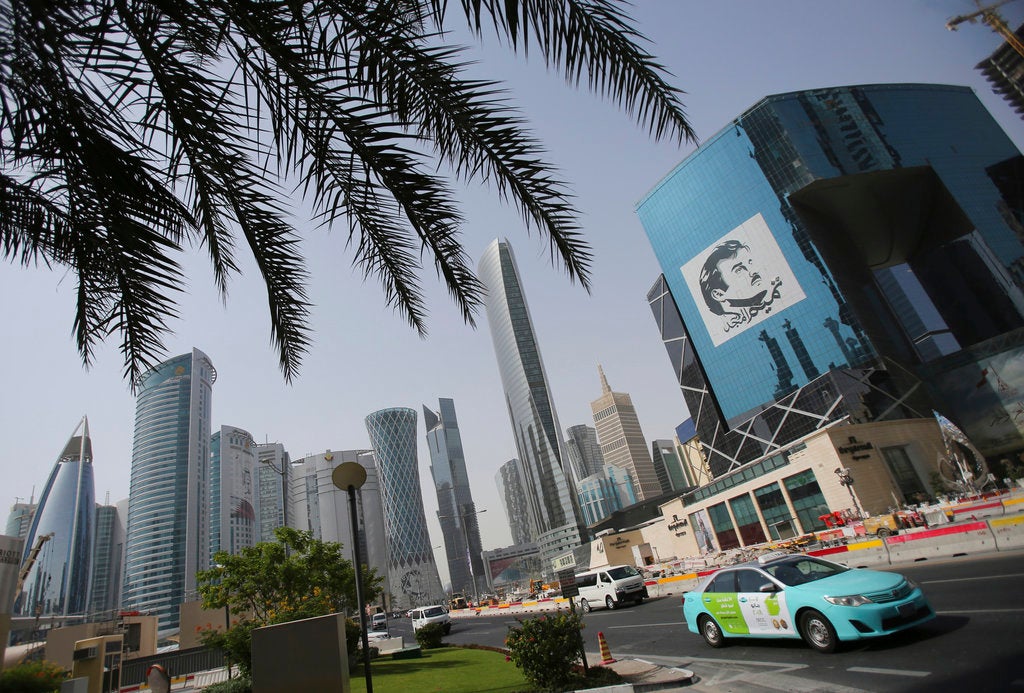 In this May 5, 2018 photo, a taxi passes by a building with the image of the Emir of Qatar, Sheikh Tamim bin Hamad Al Thani, in Doha, Qatar. AP FILE PHOTO

ISLAMABAD — Over two years have passed since Saudi Arabia, the United Arab Emirates, Bahrain and Egypt cut off all ties with the tiny state of Qatar on June 5, 2017. Yet, the art put up to mark the ‘100 days of blockade’ still stands in the center of Doha as a testament to the resolute sentiments of the people and the leadership.

The art work by five different artists can be seen on the structure of an abandoned fire station, built in the 1980s, which now functions as a creative space for artists in Doha.

The most noticeable of these works is a clenched fist breaking through barbed wire, by Qatari artist Mubarak Al-Malik, meant to represent how the restrictions imposed on the considerably smaller country haven’t derailed its progress — if anything, the people of the country believe they have pushed the state to become more self-reliant (with a little help from its friends: Turkey and Iran).

“When the siege [the term used by Qatar for the events of June 5] happened, the government reacted swiftly and quietly, trying to minimise the effect on the people as much as possible,” said a Syrian expat who moved to Doha 11 years ago. “Instead of products by Saudi and Emirati companies, the shelves of grocery stores were quickly stocked by European and Turkish products.”

And the price difference consumers had to pay? “None. We didn’t have to pay anything extra.”

On the face of it, the oil and gas-rich Qatar looks to be a melange of the suburban parts of the much larger Saudi Arabia and the glittering skyline of UAE’s star city Dubai. But under its young ruler — Emir Sheikh Tamim bin Hamad Al Thani — Qatar is bent on setting itself apart by focusing on areas that the other countries seem to consider secondary, such as wellness and art and culture.

The Emir, who took over the reins at the age of 33 when his father abdicated in his favour in 2013 — a first for the Arab world — wants people to take care of their health and take an interest in physical activities.

“You see more and more wellness centres in the city as well as parks and cycling tracks,” said a Pakistani expat who started working in Doha seven years ago and has also lived in Saudi Arabia. “Nutrition labels are mandatory on all products and eating healthy is encouraged; there’s a clear difference in the eating habits of the people here as compared to those of Qatar’s neighbours.”

That’s not to say the country doesn’t have its share of fast food chains inside the true-to-Middle East-style massive malls as well as restaurants by Michelin star chefs in the swanky skyscrapers. However, compared to the nearby Emirati cities, those are nothing to write home about.

Where Qatar is quickly making noticeable strides is its ambition to shape Doha as an art and culture hub, spearheaded by the Emir’s sister Sheikha Al-Mayassa bint Hamad bin Khalifa Al-Thani.

Starting from the Hamad International Airport, where a canary yellow ‘Untitled Lamp Bear’ by Swiss artist Urs Fischer sits in the middle of the busy terminal, to Souq Waqif where a giant thumb by French artist César Baldaccini sticks out [like a sore thumb] in the middle of the traditional Arabic market, the art work has become an integral part of the fabric of Doha’s society.

Even the high-rise buildings cropping up in Doha’s swanky West Bay and the under-construction city of Lusail have an artistic feel to them.

But when it comes to exemplary architecture and art, two of Doha’s museums take the top prize: the Museum of Islamic Art (MIA) and the National Museum of Qatar.

Chinese-American architect I.M. Pei, the man whose designs — which include the iconic Louvre pyramid — are revered worldwide, was reportedly coaxed out of retirement for the MIA. The beauty of the cream-coloured limestone structure, built atop a man-made island on Doha’s corniche, lies in its simplicity.

“This was one of the most difficult jobs I ever undertook. If one could find the essence of Islamic architecture, might it not lie in the desert, severe and simple in its design, where sunlight brings forms to life?” — I.M. Pei

Inside, however, the design gets more intricate. The first thing you’ll notice upon entering is an ornate circular metal chandelier floating above the double staircase of the atrium.

The permanent collection, spanning 1,400 years, and the exhibitions that change periodically are spread over five floors. From ceramics to textiles and manuscripts of the Holy Quran dating back to the 7th century, the collection has been widely appreciated by art connoisseurs.

The first thing you notice upon entering MIA is an ornate, circular metal chandelier floating above the double staircase of the atrium. The building draws much influence from ancient Islamic architecture, notably the Ibn Tulun Mosque in Cairo.

The National Museum of Qatar also takes its inspiration from the desert — the desert rose specifically. But unlike the MIA, the sprawling exterior is anything but simple.

Designed by French architect Jean Nouvel, the brains behind the Louvre Abu Dhabi, the sandy-beige coloured structure features a series of discs that appear to have crashed into each other.

“Taking the desert rose as a starting point turned out to be a very progressive, not to say utopian, idea. I say ‘utopian’ because, to construct a building 350 metres long, with its great big inward-curving disks, and its intersections and cantilevered elements – all the things that conjure up a desert rose – we had to meet enormous technical challenges.” — Jean Nouvel

Inside, the museum digs deep into the roots of Qatar through stories of the people who shaped the city, and glimpses into how its culture has evolved.