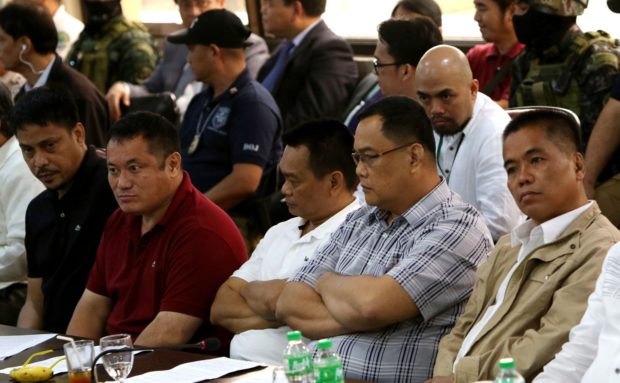 MANILA, Philippines — Malacañang assured that no VIP treatment would be given to the high-profile convicts after being transferred to the Marines’ barracks in Taguig City.

“Let us be clear: The high-profile convicts remain in a detention facility under the control of the Bureau of Corrections without any VIP treatment. In other words, no special or unusual considerations are granted to them,” Presidential spokesman Salvador Panelo said in a statement Saturday night.

About 10 high-profile convicts who testified against detained Senator Leila De Lima were ordered to be transferred by President Rodrigo Duterte from the New Bilibid Prison (NBP) to the Philippine Marines headquarters.

Duterte argued that he wanted to protect the inmates given that, as he claimed, De Lima still has allies inside the NBP.

Panelo defended Duterte’s reasoning as he said that “security is the primary consideration for said transfer and such reason, the Palace firmly believes, is legally valid given that their lives are under threat because of their testimonies.”

Panelo also said that the transfer of the said inmates is not a reward for testifying against De Lima, a known-staunch critic of the administration.

The Palace official was reacting to the comment of Senator Francis Pangilinan last Friday.

READ: Pangilinan: Transfer of 10 convicts may be ‘a reward’ for testifying vs De Lima

“There is nothing insane, as described by Senator Leila de Lima, nor is it irregular, and neither unusual in ordering high-profile convicts who are witnesses in the case against the aforesaid Senator to be transferred in a marine facility in Fort Bonifacio,” Panelo said.

“Neither is the transfer an indication of a reward, as some senators unfairly and amusingly suggested,” he added.

Justice Secretary Menardo Guevarra earlier justified the decision of Duterte to transfer the convicts to the Marine barracks as he also pointed out the inmates’ security.

However, Pangilinan dismissed the explanation of Guevarra, saying it merely proved the inability of NBP to protect prisoners.

He also said that the convict-witnesses could be given early freedom following their transfer. /je