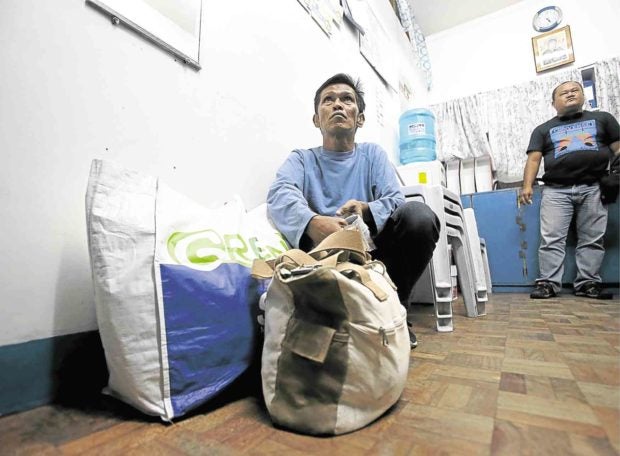 SHORT-LIVED SECOND CHANCE A day after hearing President Duterte’s order for ex-convicts wrongly released for good conduct to surrender, Nicanor Naz packed his bags and left work on a peanut and rice farm in Ilocos Sur. Barely two months after stepping out of Davao Prison and Penal Colony, Naz cuts a meek, hapless figure upon arrival on Sept. 5 at the police headquarters in Pasay City, where the local court in 1993 sentenced him to life imprisonment for a drug offense. —RICHARD A. REYES

MANILA, Philippines — Nicanor Naz had just finished his day’s work as a farmhand in Ilocos Sur province when he heard a startling message from President Rodrigo Duterte in a live radio broadcast on Wednesday night.

The President was ordering hundreds of heinous crime convicts who were freed from state prisons after being wrongly granted good conduct time allowance (GCTA) by the Bureau of Corrections (BuCor) to surrender within 15 days.

If they don’t, he warned that they would be hunted down as fugitives.

Naz knew the President was talking to him.

He immediately packed his bags and took the first bus back to his hometown of Pasay City, leaving his aunt’s peanut and rice farm where he had been working for barely two months since his release.

By 3 p.m. the following day, the 48-year-old had already turned himself in to the Pasay police station where he was first detained on drug charges three decades earlier.

“I was really happy when I was freed. And then I learn that it’s for naught. They didn’t even give me a second chance to live a new life,” Naz told the Inquirer, holding back his tears.

‘I followed every rule’

He was trying to argue that he deserved the freedom that was granted to him after spending more than half his life in prison.

“I am not a high-profile criminal. I’m just sad and hurt that I am being dragged with the issues of high-profile inmates. I did not commit any violation while in prison, I followed every rule while inside,” he said.

“I am willing to go back to jail to prove that I had done nothing wrong,” he said. “I am hoping that President Duterte will eventually help us to regain our freedom.”

His elder sister, Adelina, 60, was the one who welcomed him at the door of their Pasay home a day after his release on July 19 from the Davao Prison and Penal Colony where he had been transferred from New Bilibid Prison (NBP) in Muntinlupa City in 2012.

“His face aged and he has become thinner and darker than when I last saw him [in 1994], yet he still has that voice which sounds like he’s trying to pick a fight, but he’s just compensating for his timid personality,” she said.

Adelina said she could not help but have “hard feelings” toward the government for the short-lived freedom of her brother, the youngest of five siblings.

“It’s unfair,” she said. “We have lost our brother while he was in jail for most of our lives. Is it because we are poor, while other rich convicts are still free out there?”

At a Senate hearing on Wednesday on the good conduct law, the wife of a convict testified that she paid P50,000 to BuCor officers for the early release of her common-law husband, who still remained at NBP in Muntinlupa City.

She said the good conduct time allowance has become a business at NBP where inmates pay as much as P1.5 million.

Naz was only 19 and had just finished his first year in high school when he was arrested in 1992 for allegedly selling P200 worth of “shabu” (crystal meth).

He believed, however, that it was poverty that landed him in prison.

He was arrested only for vagrancy, but a Pasay policeman told him and his family to cough up P10,000 so he would not be jailed for a more serious offense. But they didn’t have the money.

“We couldn’t pay up. Next thing I knew, policemen said they arrested me in a buy-bust,” he recalled.

In maximum security at 20

“I didn’t understand what was happening that time,” Naz said. “They said it was what the law said, so I just followed it.”

He was only 20 when he was admitted into the maximum security compound of NBP along with other mostly older men also convicted of heinous crimes.

Adelina said her brother, whom they fondly called Kune, gave himself up for the safety of the family he had not seen for a long time.

“He could have forgotten about us, gone into hiding and started a new life,” she said. “But he told me, ‘If I stayed around here, you might get in trouble.’ We just couldn’t help but cry for Kune’s heart.”

The latest BuCor records show that 2,159 heinous crime convicts, who were supposed to be excluded from benefiting from the good conduct time law, had been released from January 2014 to Aug. 20 this year. Most were convicted of rape (939) and murder (874).

The good conduct law, Republic Act No. 10592, came under scrutiny after news broke that Antonio Sanchez, former mayor of Calauan, Laguna province, would be walking free under the law, cutting short his 40-year prison term for rape and murder.

Naz was among 74 convicts who had heeded the President’s call to surrender as of Saturday morning, BuCor officer in charge Melvin Buenafe said.

Buenafe said 38 yielded to BuCor prisons, and 36 to the police.

Among those who had surrendered were two of three men serving 40 years for the 1997 rape-slay of sisters Marijoy and Jacqueline Chiong in Cebu City.

Jesus Negro Jr., 50, and Ireneo Busano, 86, also decided to give themselves up for fear of their lives.

“I’m afraid of what might happen to me,” said Negro, a resident of Bogo City in Cebu, who was imprisoned in 1988 on eights counts of murder and released from NBP on Aug. 9, 2018. He surrendered on Sept. 5.

Busano, who was serving a life term for qualified rape since 2014, was released from Leyte Regional Prison in Abuyog town, Leyte province, on March 18. He gave himself up at the police station in Villaba town, Leyte, on Friday.

Mercado was released in December last year for his “loyalty” when he didn’t escape from prison at the height of Supertyphoon “Yolanda” (international name: Haiyan) in November 2013.

The two men surrendered because they were afraid they might get killed, Orapa said.

The police on Saturday said 17 heinous crime convicts in Cagayan province, five in Isabela province, four in Nueva Vizcaya province and two in Quirino province turned themselves in on Thursday and Friday this week.

“We provided a police escort when we transported the convicts from Tuguegarao to the Bureau of Corrections in Manila to ensure their safety,” said Police Brig. Gen. Jose Mario Espino, Cagayan Valley police director.

At the Pasay police station on the eve of his trip back to NBP on Saturday, Naz said one of the things he wanted to see after his release was SM Mall of Asia, which overlooks Manila Bay.

“It was just water when we were little, and then when I was in prison, I learned that they’re making this beautiful and huge mall near our home,” he said.

“They say its bay area has a beautiful sunset. I’ll go there in the future. I just don’t know when that will be.”