The girl with a hundred grandparents

I lost my last grandparent, my father’s mother, in 2015, with her passing at 93. I remember spending summers with her when I was young. I grew up in the 1990s when power outages were an everyday thing and telephone lines were rare. Our bonding activities were mostly done in the house, where all we had was each other’s company at the dinner table—and that was all that mattered.

These days, whenever I see grandparents taking selfies with their grandchildren at the mall, or chance upon small gatherings of seniors in a restaurant, I marvel at how the definition of “quality time” with friends and family has changed considerably over the years, and how it is constantly evolving with the technology of the times.

When our team at work started thinking about communicating to seniors about technology, we drew from what we knew from personal experience.

What we knew was that some seniors were apprehensive about trading in their old feature phones for smartphones, and were nervous about making mistakes with a touchscreen device. Others needed step-by-step assistance in setting up their Facebook account. Some needed help in uploading their photos or sending private messages on Messenger, especially after being called out for posting them on their children’s Walls. But others were simply happy being able to search for old songs and basketball highlights on YouTube.

This was how the Smart Millenniors program was born.

The name itself represented what it set out to do: to bridge the technology gap between social-media-savvy millennials and tech-curious seniors. Since its launch in 2017, the program has reached out to communities across the country, gathering senior learners and youth volunteers in Metro Manila, the province of Laguna, and the cities of Cebu, General Santos and Cagayan de Oro. 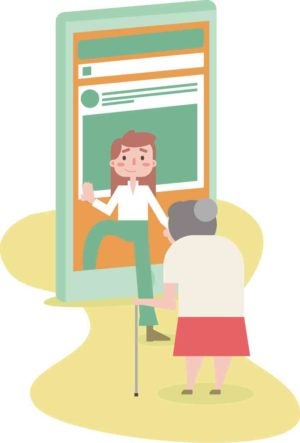 For its efforts in reaching out to seniors, the program recently received an Award of Excellence at the 2019 Philippine Quill Awards, and was among the top entries in its division.

During a Millenniors session, the roles are reversed: The youth are the teachers, and the seniors, their students. As digital natives, the youth are comfortable with gadgets and tech, making them perfect instructors. Lessons include the basics of smartphones, mobile internet, social media and internet safety, as well as the basics of taking photos and shooting and uploading videos.

I have been running point on this program since 2017, and with every class we teach, I gain dozens of new grandparents. Sitting with them to guide them through the modules has been an enriching experience, especially when combined with their stories, whether memories from their youth or snippets from their current lives and loves.

Many of them are former teachers themselves. In Magdalena, Laguna, one of our Millennior participants, 74-year-old Manuelita Jocson, served as a principal in her town’s public high school. During our session, we learned that her assigned volunteer had been one of her students, and that she was so thrilled to reunite with her.

Romeo Silva, who heads the senior citizens association at Barangay Fortune, Marikina City, is also a former teacher and is all for continuing education for seniors.

Indeed, in Paco, Manila, the seniors were all too happy just to be students again, after being out of the classroom for so long. I remember how Paz Pangilinan, 60, became teary-eyed after receiving her certificate of completion—it was her first certificate since 1976.

All walks of life

They came from all walks of life — retired government employees, computer technicians, factory workers. Many of them now share a current vocation as full-time grandparents in charge of their grandkids. Our Messenger group chats, which we set up during the session as part of the hands-on activities, served as my window into their day-to-day activities. And because we added one another as friends on Facebook, my feed is now mostly an assortment of cat photos, work-related announcements and videos from senior-led Zumba sessions, senior birthday celebrations and chorale performances during the flag ceremony.

Indeed, with social media at their disposal, they are adding their respective colorful lives to this collective “digital quilt,” making it more vibrant and meaningful.

I used to think that technology was for the young, and that the elderly are better off without social media and its complications. But this was clearly not the case for many of the seniors who enthusiastically came to our sessions, hoping to find new ways to connect with their children and grandchildren, as well as reconnect with old friends.

Even if we set out to teach, we always end up learning more. At the end of every session, we take home with us a treasure chest of lessons on life and love, sprinkled with humorous anecdotes and funny moments, in exchange for the knowledge we shared. In all, not a bad exchange, if you ask me.

For all the time I spent teaching senior citizens about virtual connections, I ended up rediscovering how to truly reconnect with the elderly — and what it feels like to have 100 newfound lolos and lolas in the process.