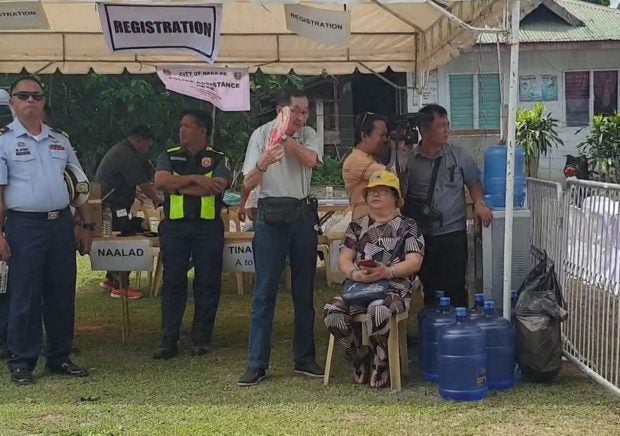 Thelma Chiong and her husband, Dionisio, have to stay outside the tent in Barangay Inoburan, Naga City, Cebu where President Duterte delivered a speech since they were not in the guest list. They went to Naga to thank the President for ordering the arrest of the convicts released under the Good Conduct Time Allowance Law but were disappointed that Mr. Duterte was all praises for sacked Bureau of Corrections chief, Nicanor Faeldon. Photo by Dale Israel, Inquirer Visayas

CEBU CITY, Cebu, Philippines — The parents of rape-slay victims Marijoy and Jacqueline Chiong felt that they had to personally thank President Rodrigo Duterte for removing a thorn from their hearts.

Thelma and Dionisio Chiong traveled all the way from Cebu City to Naga City to thank the President for firing former Bureau of Corrections chief Nicanor Faeldon and ordering the rearrest of their daughters’ killers.

“We [wanted] to thank the President for firing Faeldon and for ordering the rearrest of the convicts … We’re very grateful. Nakuhaan ug tunok akong kasingkasing (A thorn was removed from my heart),” Mrs. Chiong said.

Although they were not admitted to the tent where the President was delivering a speech, they gladly waited outside and waited until after the speech.

But the President’s words fell on them like a ton of bricks.

“I still believe in [Faeldon]. It was he who informed me about some smuggled cigarettes. Because of that report, we earned P37 billion,” the President said, adding that Faeldon was a “tarong na tao” (upright man).

“I walked out already. He was all praises for Faeldon from the beginning. Many are angry at Faeldon and I’m one of them,” she said. “I was shocked.”

Thelma said the President should not have spoken about Faeldon who was now under an apparently damning Senate investigation.

“I am a Duterte fan. I had fought against a lot of people because I am for Duterte. For him to defend Faeldon because he is his friend, the President should not have spoken about him,” she said.

Faeldon is being blamed for the release from prison of more than 1,000 convicts for good conduct, including three of the seven men convicted for the rape-slay of Marijoy and Jacqueline.

The Chiong couple had been seeking the rearrest of Josman Aznar, Ariel Balansag and Alberto Caño, who they felt should serve their two life terms along with four others.

Despite their disappointment, however, Mrs. Chiong said they remained grateful to the President.

Balansag and Caño had already surrendered, according to Police Col. Roderick Mariano, director of the Cebu Provincial Police Office.

“Is one upright if he released Chinese drug lords and almost freed an unrepentant rapist-murderer?” Hontiveros said on Saturday.

Sen. Panfilo Lacson said that trust was something personal to the person giving it and he respected the President’s opinion but it did not mean that the President was right and Faeldon was trustworthy. —With a report from Leila Salaverria