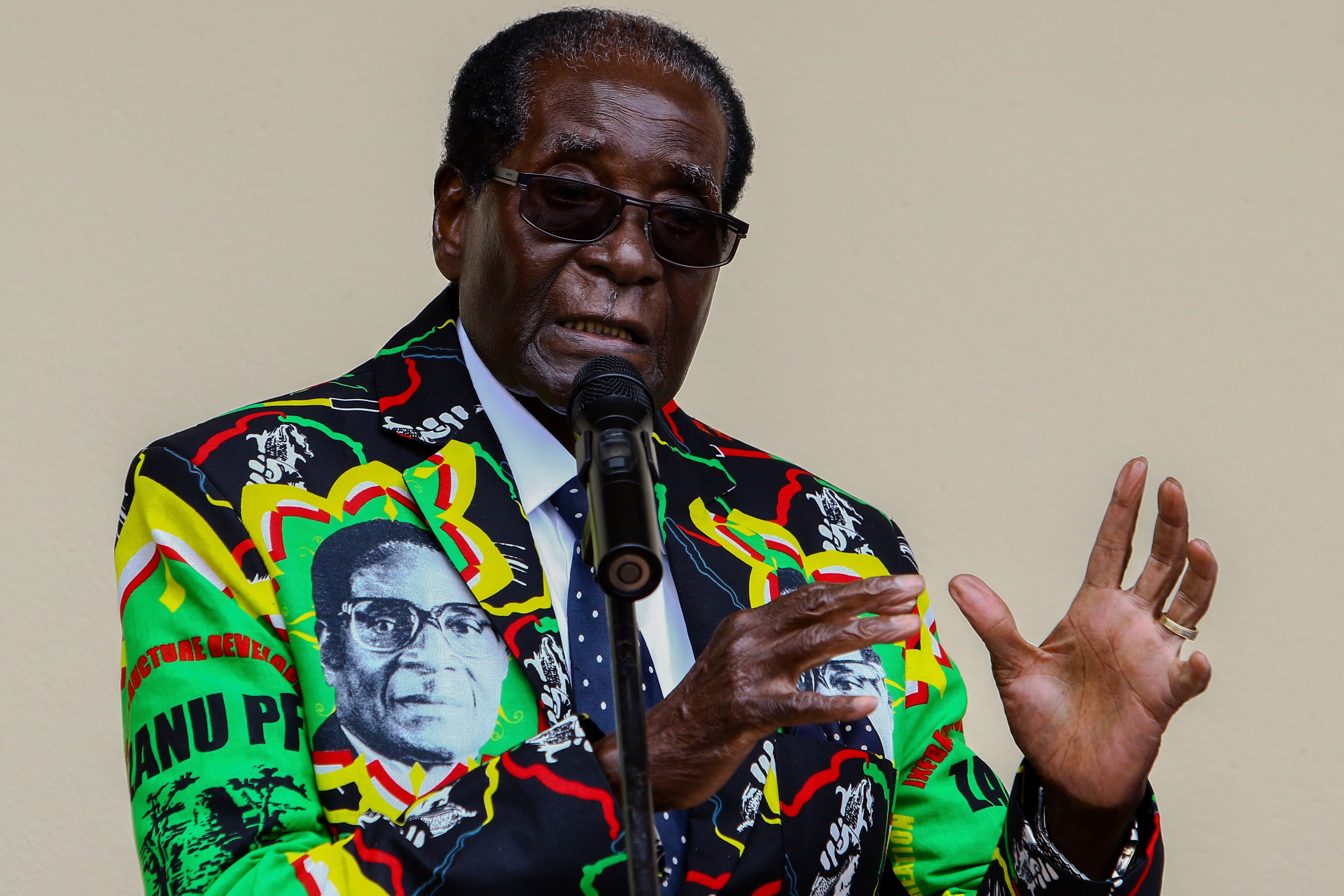 (FILES) In this file photo taken on December 17, 2016 Zimbabwe then President Robert Mugabe speaks at the party’s annual conference in Masvingo. – Robert Mugabe, who led Zimbabwe with an iron fist from 1980 to 2017, has died aged 95, Zimbabwe President Emmerson Mnangagwa announced September 6, 2019. (Photo by Jekesai NJIKIZANA / AFP)

HARARE, Zimbabwe — Zimbabwe was on Saturday due to begin a period of national mourning following the death of Robert Mugabe, the former guerrilla hero turned despot who ruled Zimbabwe for 37 years.

As Zimbabweans expressed sharply divided opinions about Mugabe, President Emmerson Mnangagwa said his predecessor had been declared a “national hero” and that Zimbabwe would mourn him until the burial.

“The late departed icon will be eternally remembered and honored for the bold and historic land reform program which he undertook,” said Mnangagwa during a national address broadcast on television.

Mugabe, 95, passed away on Friday at 0240 GMT in Singapore, where he had been hospitalized in April.

First heralded as a liberator who rid the former British colony Rhodesia of white minority rule, Mugabe used repression and fear to govern until he was finally ousted by his previously loyal generals in November 2017.

His increasingly tyrannical leadership and economic mismanagement prompted millions to leave the country.

He had been battling ill health, and after a humiliating fall from office, his stamina seeped away rapidly.

Some Zimbabweans hailed him as a “true African” and a “revolutionary icon”. For others, however, his named evoked only “evil”, “destruction” and “suffering”.

“Mugabe was an educated man but he used his education for evil,” said Baster Magwizi, a war veteran in the southwestern city of Bulawayo.

“He manipulated everyone around him and fooled the world, only Zimbabweans can testify to this as we lived in hell under his leadership,” he said.

“To be honest I thought I would celebrate when he died but… I’m actually sad because he was an embodiment of what a true African should be.

“He had his flaws but he did a lot of positive things for us which I doubt we will ever see again in this country.”

“We are pained by his loss. But we also celebrate the life of a legend. He was a living legend. He was a pan-Africanist. He brought the country of Zimbabwe from colonialism to the freedom that we had,” Molai told reporters outside the funeral parlor in Singapore.

He said the president was likely to announce when the body would move “sometime next week”, adding that he could give no further details on the “state funeral”.

In Zvimba, Mugabe’s rural homestead, another nephew Leo Mugabe told reporters the family had “not yet deliberated on where he is going to be buried”.

South African President Cyril Ramaphosa remembered Mugabe as a “liberation fighter” and a “champion of Africa’s cause against colonialism”.

Kenyan leader Uhuru Kenyatta hailed Mugabe as an “elder statesman, a freedom fighter and a Pan-Africanist who played a major role in shaping the interests of the African continent”.

But Britain said there were “mixed emotions” after his death.

“Zimbabweans suffered for too long as a result of Mugabe’s autocratic role,” the foreign ministry said in a statement.

The Mugabe years are widely remembered for his crushing of political dissent and policies that ruined the economy.

The former political prisoner turned guerrilla leader swept to power in 1980 elections after a growing insurgency and economic sanctions forced the Rhodesian government to the negotiating table.

In office, he initially won international plaudits for his declared policy of racial reconciliation and for extending improved education and health services to the black majority.

But that faded rapidly as Mugabe cracked down on his opponents. During the 1980s, he led an infamous campaign known as Gukurahundi during which an estimated 20,000 dissidents were killed.

The violent seizure of white-owned farms turned him into an international pariah — though his status as a liberation hero still resonates strongly across Africa.

Aimed largely at angry war veterans who threatened to destabilize his rule, the land reform policy wrecked the crucial agricultural sector, caused foreign investors to flee and plunged the country into economic misery.

All along, the Mugabe regime was widely accused of human rights violations and of rigging elections.

The topic of his succession was virtually taboo until he reached his 90s and became visibly frail.

As his health weakened, the military finally intervened to quash his second wife Grace’s presidential ambitions in favor of their preferred candidate, Mnangagwa, Mugabe’s vice president at the time.

Mnangagwa took over in November 2017 and was elected in July last year.  /muf