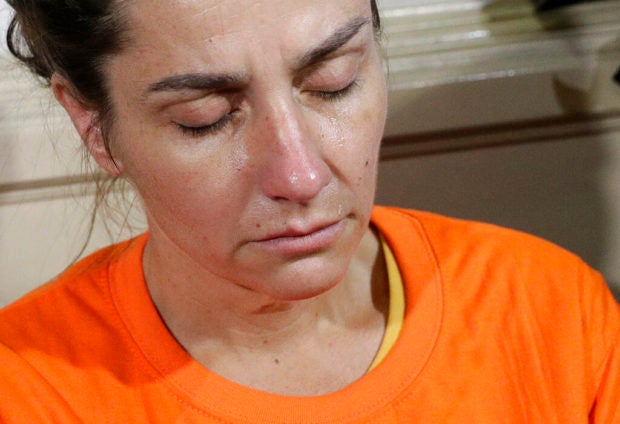 A tear rolls on the cheek of American national Jennifer Erin Talbot from Ohio before the start of a press conference by the National Bureau of Investigation (NBI) in Manila, Philippines, Thursday, Sept. 5, 2019. The NBI said that the 43-year-old Talbot was arrested at the Ninoy Aquino International Airport yesterday for trying to bring out of the country a 6-day old Filipino baby without proper travel documents. AP

MANILA, Philippines — She only wants to give the child a name and Church blessing.

This was what Jennifer Talbot told government authorities when she was interrogated about the 6-day-old baby found in her “oversized belt bag” while at the Ninoy Aquino International Airport (Naia) as she was set to embark on her journey to the United States last September 4.

Atty. Manny Dimaano, of the National Bureau of Investigation-International Airport Investigation Division (NBI-IAID), said the 43-year-old American national was interviewed by representatives of the Department of Social Welfare and Development (DSWD).

Talbot was bound for US via Delta Air Lines early Wednesday morning when intercepted at the Boarding Gate of Naia Terminal 3 by airline personnel for carrying a baby boy inside her bag.

The NBI said Talbot failed to present any pertinent documents for the child’s travel.

According to NBI, Talbot merely showed a document indicating that the infant was born on August 29, 2019 at Southern Philippines Medical Center, Davao City and a notarized – but unsigned – Affidavit of Consent and Support allegedly executed by the 19-year-old mother of the baby, supposedly permitting the child’s travel to US.

Dimaano said Talbot has wanted to adopt the baby despite having five kids with special needs.

“She browsed through the internet and stumbled upon the subject [mother of the baby] na willing naman [to give up her child for adoption],” noted Dimaano, again quoting from Talbot’s interview with DSWD officers.

Talbot is now under the custody of NBI and facing cases for violation of Section 4 in relation to Section 6 of the Republic Act 9208 (The Anti-Trafficking in Persons Act) as amended by R.A. 10364 (Expanded Anti-Trafficking in Persons Act of 2012; Section 10 (a) of R.A. No. 7610 (Special Protection of Children Against Child Abuse, Exploitation and Discrimination Act; and Article 267 of the Revised Penal Code (Kidnapping and Serious Illegal Detention).

She was already presented before the Office of the Prosecutor and informed of the case against her. The baby’s mother and still unidentified father are also facing a complaint for violation of R.A. 7610 ((Special Protection of Children Against Child Abuse, Exploitation and Discrimination Act). /kga