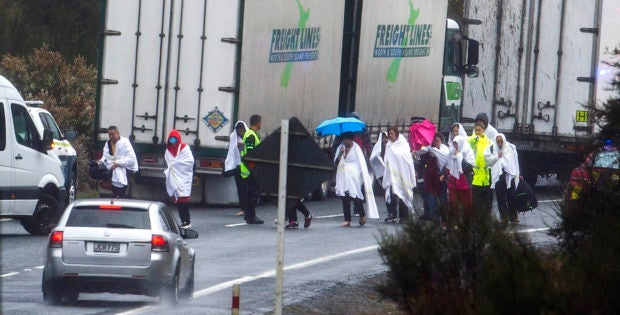 Survivors from a tourist bus crash walk along the highway in the Mamaku Ranges near Rotorua, New Zealand, Wednesday, September 4. 2019. A bus carrying a group of Chinese tourists crashed near a popular New Zealand tourist town. (Ben Fraser/Rotorua Daily Post via AP)

Police Inspector Brent Crowe told media that the medium-sized tour bus was carrying 27 people and was about 20 minutes north of Rotorua at just after 11 a.m. when it failed to negotiate a bend on a highway.

He said the bus drifted onto the wrong side of the road and as the driver tried to correct it flipped onto the driver’s side. He said no other vehicles were involved in the crash but the weather was a factor.

“High winds, fog and a lot of rain,” Crowe said. “And the road surface was clearly wet and slippery.”

Liang Zhi, a diplomat from the Chinese Embassy in Wellington, told The Associated Press that they understand the bus was carrying a driver, a tour guide, and Chinese tourists mostly from the Sichuan province.

“Our embassy attaches great importance to the tragic incident,” Liang said. “Our ambassador is on her way to Rotorua. Our embassy will make every effort to help the Chinese citizens who have died and been injured in the accident.”

He said he expected that New Zealand officials would also be offering all the assistance they could.

Crowe said it still investigating whether the bus was fitted with seatbelts and if the passengers were wearing them. He said the driver was not seriously injured, and it would likely take several weeks of investigation to determine whether he would face any charges.

The St. John ambulance service said it dispatched five helicopters and five ambulances to the crash site to transport patients.

Rotorua is popular among tourists for its geothermal activity, including boiling mud pools, and for its indigenous Maori culture. /kga