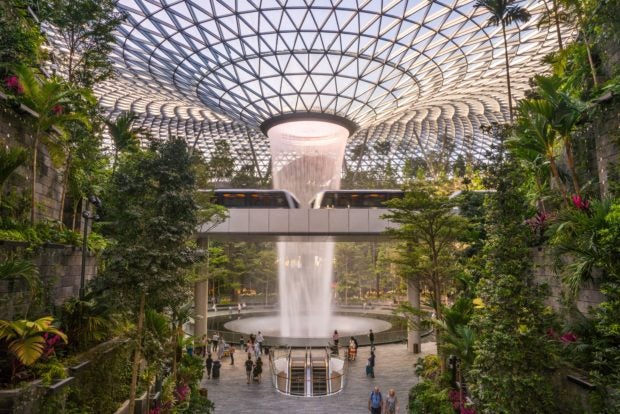 One could be tempted to overstay their welcome at the lush Jewel Changi airport.  Image: Unsplash

A man in Singapore was arrested after he used a boarding pass to bid his wife goodbye at the Changi Airport on Aug. 25.

In a statement made on Facebook on Aug. 28, police said the 27-year-old man purchased a plane ticket to go to the transit area and send off his wife. Singapore police took it as an opportunity to remind travelers that in the country, misusing boarding passes is an arrestable offense under the Infrastructure Protection Act.

Transit areas of Changi Airport are protected places, thus those who are in the area should travel to another destination. The penalty for misusing a boarding pass could be a fine of up to S$20,000 (over P750,000), going to jail for up to two years, or both. Police said that 33 people have been arrested since January for misusing boarding passes.

A woman who just used her boarding pass in September 2018 to claim a Goods and Services Tax (GST) refund in the transit area, but did not leave Singapore was charged in court last March for misuse of a boarding pass, the Straits Times reported.

The airport has been dubbed the world’s best airport by airline and airport consulting firm Skytrax for seven years in a row. The airport’s Jewel terminal, which opened in April, has added to its appeal as a destination in itself. It boasts a 40-meter waterfall, a massive indoor garden and the Canopy Park, which includes giant slides and mazes.  /ra

ADVERTISEMENT
Read Next
Sanchez camp has ‘no intention’ of paying damages? What happens next?
EDITORS' PICK
BREAKING: 3,226 latest COVID-19 cases bring PH’s total to 106,330
A gem of a residence in the new normal
Been there, done that but what’s the difference between MECQ and GCQ?
Smart 5G goes live
Water remains our saving grace right now
PNP: Checkpoints back in MECQ areas
MOST READ
MECQ guidelines in infographics
You’re my ‘idol’ in crafting laws, neophyte senator ‘Bato’ tells Drilon
Lacson takes up cudgels for health workers ‘threatened’ by Duterte
MECQ in NCR, other areas: Mass transportation suspended, quarantine pass required anew
Don't miss out on the latest news and information.