Report: Drop in Mindanao violence partly due to martial law 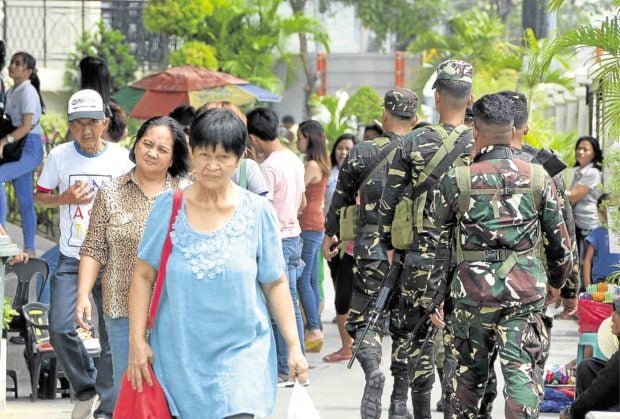 MANILA, Philippines — Should martial law be lifted now that violent incidents have declined in the former Autonomous Region of Muslim Mindanao (ARMM)?

The answer is not as clear cut as yes or no, peacebuilding organization International Alert Philippines said Tuesday.

In a press briefing in Taguig City, Conflict Alert, a subnational monitoring system developed by International Alert Philippines, launched its report which revealed a 30-percent drop in the conflict incidence in the Muslim Mindanao region from 2017 to 2018.

The report noted that “the single most important reason” behind the said decline is the imposition of martial law, which allowed the government to have a stronger presence in the region.

Francisco Lara, senior peace and conflict adviser of Alert Philippines, explained that several considerations were considered — including the possible decline in population which could lead to fewer number of violence incidence; and the significant entry of commercial investments, enterprises, and welfare goods in the area, among others.

But Lara said the reason behind the decline in violence in the region primarily pointed to one thing — the imposition of martial law.

“We had to accept the most glaring evidence that was staring us at the face and that people were telling us. They kept telling us: ‘It’s martial law, guys. It’s martial law.’ That’s the reason behind that conclusion,” Lara said.

Lara clarified, however, that his group was not pushing for the extension of martial law.

“The position we took is: We are not arguing for the extension of martial law. What we’re saying is that any plan to lift martial law should first be preceded by a major political settlement and agreement about the management, the carrying, and the use of firearms,” he said.

“If that is not done among the political leaders, among the clan leaders in Mindanao, then there is a very real possibility of a return to the previous situation and the demolition of the fragile peace that we have right now in the Bangsamoro,” he added.

The group’s written report explained that the imposition of martial law in the region allowed for increased police visibility and number of military checkpoints, making it “extremely difficult for people to carry their firearms in public and engage in gun battles across the region.”

“Unless a political settlement is reached on the critical issue of illicit weapons, the withdrawal of the huge military presence in the region may destroy the fragile peace and reverse the gains of the past two years,” the report stated.

“The normalization component of the transition does not guarantee lasting peace and security and is in fact hobbled by other institutional barriers such as the liberalization in the ownership and carrying of firearms under Republic Act 10591, and the traditional dependence of clans and other armed groups for the protection of lives and property,” the report added.

Mindanao has been under martial law since the May 23, 2017, when the pro-Islamic State militants started the siege of Marawi City.

Martial law was extended thrice on the request of President Rodrigo Duterte.

The latest extension request will last until Dec. 31, 2019, with the President claiming that “rebellion still persists in Mindanao and that the public safety requires the continuation of martial law in the whole of Mindanao.”