Sanchez wife: Ex-mayor is innocent; no plan to indemnify victims 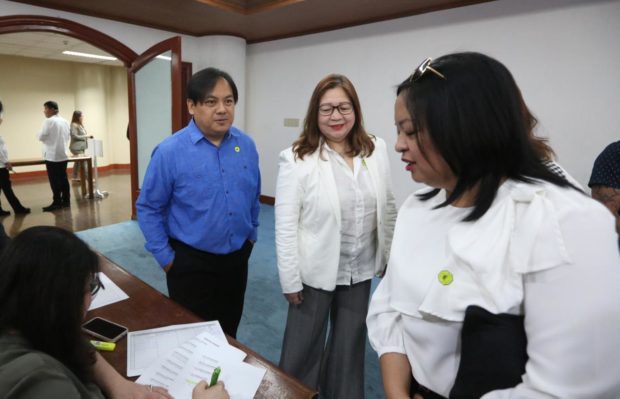 Members of the family of former Calauan Mayor Antonio Sanchez arrive at the Senate for the GCTA hearing. Standing in the middle is Sanchez’s wife Elvira. INQUIRER photo / Marianne Bermudez

MANILA, Philippines — The wife of convicted rapist and murderer former Calauan Mayor Antonio Sanchez was firm in saying that their family would not pay the P11.3 million in damages to the family of her husband’s victims.

Facing a Senate inquiry on Tuesday concerning a law that nearly resulted in the premature release of the former mayor, Sanchez’s wife, Elvira, insisted on the high-profile convict’s innocence.

In 1995, then Pasig Regional Trial Court Judge Harriet Demetriou found Sanchez and six of his henchmen guilty in the brutal killing of Sarmenta and Gomez.

The court imposed the penalty of seven reclusion perpetua, each equivalent to 40 years in prison, on each of the seven men. It also ordered them to pay P11.3 million in damages to the families of the two students.

The Supreme Court affirmed the court’s conviction of the seven men in 1999.