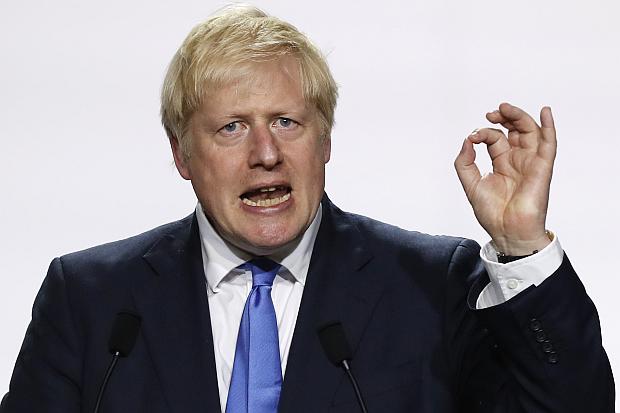 In this photo, taken on Monday, Aug. 26, 2019, Britain’s Prime Minister Boris Johnson gestures during his final press conference at the G7 summit in Biarritz, southwestern France. Boris Johnson is getting tough with members of his Conservative Party who oppose his Brexit plans at the start of what promises to be a momentous week in British politics. (Photo by FRANCOIS MORI / AP)

LONDON — Prime Minister Boris Johnson is getting tough with members of his Conservative Party who oppose his Brexit plans at the start of what promises to be a momentous week in British politics.

The so-called “rebels” are being warned Monday that they will be expelled from the party if they take part in efforts led by opposition parties in Parliament to block a departure from the European Union without a deal.

Conservative former justice secretary David Gauke accused Johnson of “goading” party members to vote against the government so that they can be ousted in favor of lawmakers who support the prime minister’s more extreme version of Brexit.

Opposition parties are pledging to challenge Johnson’s policy that the U.K. will leave the EU on Oct. 31 even if there is no deal. Without such a deal, Britain faces a chaotic departure that economists warn would disrupt trade by imposing tariffs and customs checks between Britain and the 27 other members of the bloc — potentially triggering a drop in the pound and plunging the U.K. into recession.

Johnson insists the potential for a no-deal Brexit must remain an option in negotiations with the EU. The EU is adamant it will not renegotiate the agreement struck with former Prime Minister Theresa May on the terms of Britain’s departure and the framework of future relations.

The deal was defeated in Britain’s parliament three times, largely because of opposition to clauses related to keeping open the border between Ireland and Northern Ireland.

Former prime minister Tony Blair has warned that politicians are at a critical juncture.

“In modern history, there’s never been a more important moment for politicians to put country before tribe and national interest before self-interest,” Blair said in remarks at the Institute for Government on Monday,

Time is short, as lawmakers will have little time before the withdrawal deadline and face a lengthy parliamentary suspension in the middle.