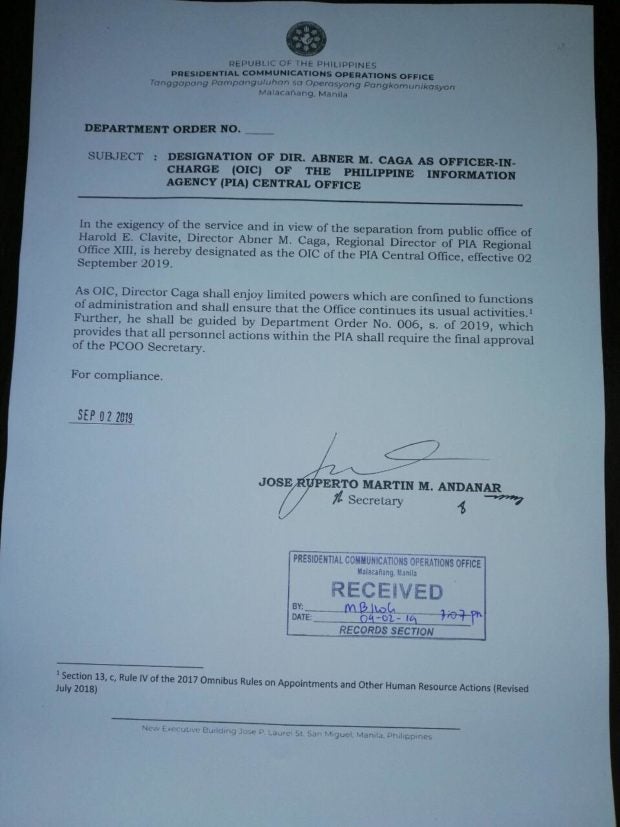 “In the exigency of the service and in view of the separation from public office of Harold E. Clavite, Director Abner M. Caga, Regional Director of PIA Regional Office XIII, is hereby designated as the OIC of the PIA Central Office, effective 02 September 2019,” Andanar said.

“As OIC, Director Caga shall enjoy limited powers which are confined to functions of administration and shall ensure that the Office continues its usual activities,” he added.

Andanar said Caga should “be guided by Department Order No. 006, s. of 2019, which provides that all personnel actions within the PIA shall require the final approval of the PCOO Secretary.”

Caga is the director of PIA Region 13.

Clavite announced Friday night his exit as PIA’s director general but maintained he did not resign.

But in a statement sent to reporters, Medialdea said that Clavite, in his letter on July 17, “manifested his intention to submit his irrevocable resignation to the President citing personal reasons.”

“He also said that he already gave three years to the country and it’s time for him to go back to his family. This was elevated to the President and thereafter accepted it,” Medialdea added. /je