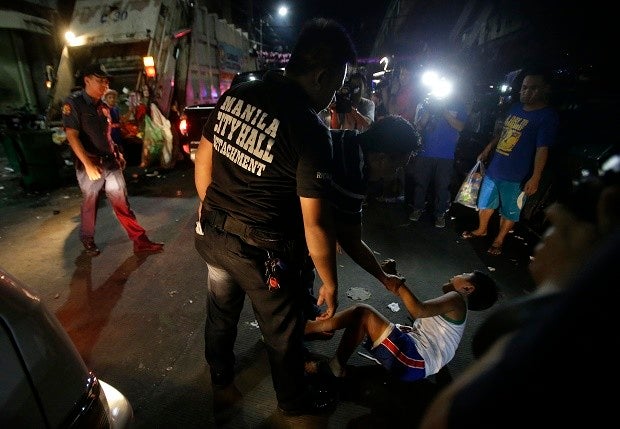 In this  June 8, 2016 file photo, a boys cries as he is apprehended by a social worker and police for violating a night to dawn curfew for minors in Manila. In a crackdown, dubbed “Oplan Rody,” police rounded up hundreds of children or their parents to enforce a night curfew for minors, and taken away drunk and shirtless men roaming Metro Manila’s slums. AP FILE

MANILA, Philippines — The city government of Manila has ordered the strict implementation of curfew on minors, ages below 18, from 10 p.m. up to 4 a.m. the next day.

Manila Mayor Isko Moreno issued on Monday the memorandum after he conducted a surprise inspection around Manila and accosted some 22 minors loitering on the streets late night Sunday.

During his Facebook Live, Moreno further revealed that authorities have rescued 365 minors found inhaling solvent, sleeping on streets, and loitering along the streets of Manila for the month of July alone.

Under the memorandum, it said that statistics would show that minors loitering from the said time frame were the cause of the “breach of peace and order in the city.”

“The City Council further noted that the policy of the City of Manila to promote the physical and moral well-being of children is not achieved, if not frustrated, by reason of non-cooperation and non-liability of the parents and/or guardian over the minor’s actions,” the memorandum added.

In an interview, Moreno said that parents of minors who will be caught by the authorities will have to face sanctions ranging from P2,000 plus one month imprisonment up to P5,000 plus six months of imprisonment, depending on the age of their children.

Moreno also said that if in case the children apprehended were siblings, the sanctions of the parents would be doubled.

Following the said order, Moreno has urged all barangay (village) chairmen to submit to him a report on the status of the implementation of curfew.

The Manila Police District is likewise directly to submit a report to the Office of the Mayor regarding the matter.

Lastly, the Department of Social Welfare and Developments is directed to closely coordinate with the authorities in ensuring the implementation of the said order. /jpv

Read Next
Albayalde says ex-MILF fighters with criminal cases not allowed in PNP
EDITORS' PICK
House energy committee chair Arroyo bats for cheap electricity
Reignite your passion with the vivo Y35
Individuals affected by ‘Karding’ now over 157,000
Karding damage to infrastructure at P23M
Bongbong Marcos says PH ‘open for business’ with new Clark Airport terminal
Newbie gamers are in for a treat with the power-packed feature of vivo Y16
MOST READ
LPA enters PAR, may develop into tropical depression
Angelica Panganiban ‘duguan, sugatang mom’ one week into breastfeeding
Security guard shoots 2 other guards dead inside Makati subdivision
Badoy not with Office of the President, NTF-Elcac, under Marcos admin — solon
Don't miss out on the latest news and information.