VERO BEACH, Fla.  – Two days after storm shutters started going up and people waited in long lines for gas and food in anticipation of Hurricane Dorian, the parking lot of a Home Depot a short drive from the beach in central Florida was nearly empty as the sun peeked out behind scattered clouds. 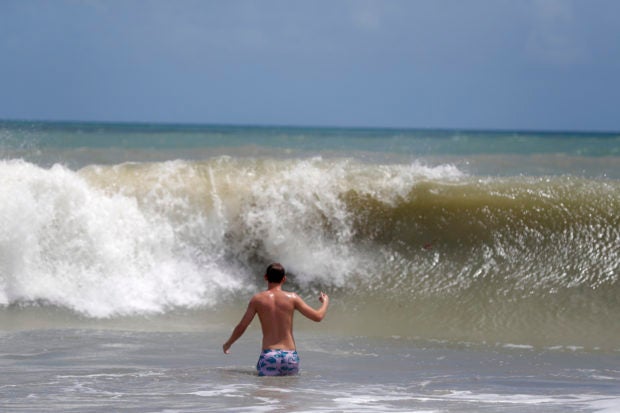 Mike Lafferty boarded up his house near Vero Beach days ago and was at the store to pick up a few more things. The waiting can be bothersome, but it beats being caught unprepared.

The National Hurricane Center has a 60% chance of the area getting hurricane force winds before early Wednesday.

“It’s not overkill. It’s necessity. You don’t know what is going to happen,” Lafferty said. “Electricity is going to go out sometime. You have to be ready for it.”

From Florida to North Carolina, residents and government officials have been preparing for possible impacts of Dorian for days, even as the official forecast has the center of the storm staying offshore.

The Category 5 hurricane’s nearly unprecedented strength — the 185 mph (295 kph) winds made it the second strongest storm in the Atlantic Ocean since 1950 — has people aware that even a tiny error in the forecast could be catastrophic.

“We have to be ready for it,” said Neil Baxley, commander of emergency services in coastal South Carolina’s Beaufort County. “We are deep in the error cone.”

The gas lines and people queued up with carts outside grocery stores weren’t seen Sunday along the southeast U.S. coast.

Instead, people were watching and waiting to see the destruction from the northern Bahamas, where Dorian made landfall on the Abaco Islands.

“I’m thanking God now that it has turned a little more to the east. But that’s a forecast. We never know,” said Kevin Browning, who was at the Vero Beach Home Depot looking for supplies after putting up his hurricane shutters Friday. “I feel for the Bahamas and I’m praying for them.”

Florida’s governor suspended tolls on roads to help those seeking to leave.

Many of South Carolina’s coastal residents are now evacuating for the fourth time in four years. Just one storm hit the state directly during that time — Matthew in 2016. McMaster addressed the storm weariness on Sunday evening as he announced the upcoming evacuations.

“We can’t make everybody happy. But we believe we can keep everyone alive,” the governor said.

Earlier in the day, McMaster said he understood the frustration with the waiting and uncertainty of Dorian’s path.

“We don’t have a solid prediction as to where it might turn, where it might not turn when it will get here. But we assure you we have the best minds and the most experienced and talented people working around the clock,” McMaster said.

In Florida, it was still the Labor Day holiday weekend, so folks headed to the beach. It wasn’t as crowded as usual at Jacksonville Beach, and members of the American Red Cross Volunteer Life Saving Corps were warning people not to go into the water.

“It looks like business as usual, which is a little strange, but a lot of people are here from out of town they don’t want the storm to ruin their Labor Day weekend,” said volunteer lifeguard Mikey Atkins.

Gerry Heister has lived in Florida for 35 years and seen a lot of storms come through Vero Beach. “Frances, Jeanne, Matthew and whatever the heck the others were,” she said Sunday, trying to recall them all.

She said she has learned it is better to be prepared and the worst not happen then to be surprised and not ready.

“You just prepare and then once it’s gone, you get on with the rest of your life,” Heister said. /gsg

Read Next
Far-right surges in 2 east German elections but doesn’t win
EDITORS' PICK
Do all the things you do, faster
Motorcycles, smartphones, and cash prizes up for grabs in TNT’s ‘Tuloy Ang Saya’ Raffle in Mindanao
House energy committee chair Arroyo bats for cheap electricity
NCR at increased COVID risk again
New PS-DBM director says DepEd laptop MOA ‘not legal’
House okays budget; ways to go in Senate
MOST READ
Shopee PH gets flak for getting Toni Gonzaga
Robredo’s tarpaulin portrait at Palace just a ‘placeholder’
Robredo supporter tackles elephant in room: No massive fraud in 2022 polls, surveys were just right
DepEd: We are in a crisis situation in education sector
Don't miss out on the latest news and information.