WARSAW, Poland  – Germany’s president expressed deep remorse for the suffering his nation inflicted on Poland and the rest of Europe during World War II, warning of the dangers of nationalism as world leaders gathered Sunday in the country where the war started at incalculable costs. 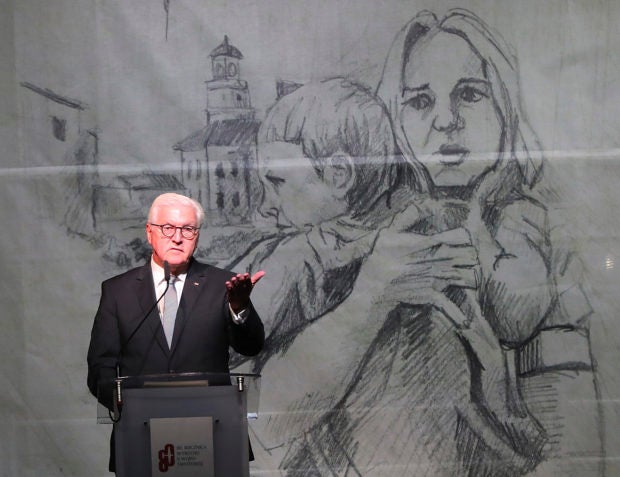 Also in attendance were elderly Polish war veterans wearing military uniforms and a Holocaust survivor wearing a yellow Star of David and the striped clothes that prisoners wore at Nazi German death camps.

Steinmeier expressed his sorrow over the mass killings Adolf Hitler’s regime committed in Poland, which paid a huge price for being the place war began on Sept. 1, 1939. The German president expressed gratitude to Poles for the gestures of forgiveness Poland has bestowed in return.

“I bow in mourning to the suffering of the victims,” Steinmeier said. “I ask for forgiveness for Germany’s historical debt. I affirm our lasting responsibility.”

Two weeks after the German invasion, the Soviet army invaded Poland from the east, putting the country under a dual occupation that came with atrocities committed by two invaders. By the war’s end nearly six years later, about 6 million Polish citizens had been killed, more than half of them Jews.

Polish President Andrzej Duda recalled Poland’s immense suffering and he appealed to those assembled not to close their eyes now to imperial tendencies and border changes imposed through force.

Duda cited aggression against Georgia and Ukraine, and though he didn’t name Russia, it was clear he found that country at fault as the aggressor.

“Recently in Europe we are dealing with a return of imperialist tendencies, with attempts to change borders by force, with aggression against countries,” Duda said. “Turning a blind eye is not the recipe for preserving peace. It is a simple way to embolden aggressive personalities, a simple way to, in fact, give consent to further attacks.”

Germany’s president had a modern-day warning of his own — about the dangers of nationalism — and described European unity as a guarantee for peace in the future.

Russia’s recent rehabilitation of the Stalinist era, and a pact Soviet leader Josef Stalin made with Hitler that led to Poland’s dismemberment in 1939, were apparently also behind the decisions not to invite Putin. That represented a change from 10 years ago, when Putin was invited amid attempts to thaw relations between the West and Russia at the time.

With Putin not on the guest list, Russia’s Foreign Ministry tried to make sure the Soviet Union’s role in ending the war got acknowledged. It tweeted: “One may have varying opinions on Soviet policy during the initial period of World War II, but it is impossible to deny the fact that it was the Soviet Union that routed Nazism, liberated Europe and saved European democracy.”

President Donald Trump had originally been scheduled to attend, but canceled as Hurricane Dorian barreled toward the U.S. That removed the opportunity for potential comments about his go-it-alone “America First” approach to foreign policy, which has rattled allies in Europe.

Pence spoke on behalf of the United States in Warsaw.

“While the hearts of every American are with our fellow citizens in the path of a massive storm, today we remember how the gathering storm of the 20th century broke into warfare and invasion followed by unspeakable hardship and heroism of the Polish people,” he said.

The “character, faith, and determination of the Polish people made all the difference,” Pence said. “Your oppressors tried to break you, but Poland could not be broken.”

French President Emmanuel Macron tweeted: “80 years after the invasion of Poland by the Nazi army, let us remember the eruption of the second world conflict, which ravaged our Europe. May we be more committed than ever to the fight for peace and our values.”

During the observances in Warsaw, church bells tolled across a capital that German forces razed to the ground decades ago. Polish and foreign leaders laid wreaths, and one by one rang a bell in memory.

The observances started at 4:40 a.m. at the sites of the first German attacks — Wielun, a defenseless town, and minutes later on the Westerplatte Peninsula in Gdansk.

“Mr. President, thank you for your presence and your attitude,” Duda said. “I can see a man who has come with humility, a bowed head in order to pay homage … to share the pain.”

“Eighty years ago, unspeakable horrors were unleashed on the Polish population, unspeakable horrors that we need to remember to prevent them from recurring in Europe,” said Timmermans, the first vice president of the European Commission. “Can you imagine in this gathering that every fifth person sitting and standing here would suddenly disappear? This is what happened to the Polish nation at the hands of cruel Nazis who lost every understanding of humanity.” /gsg