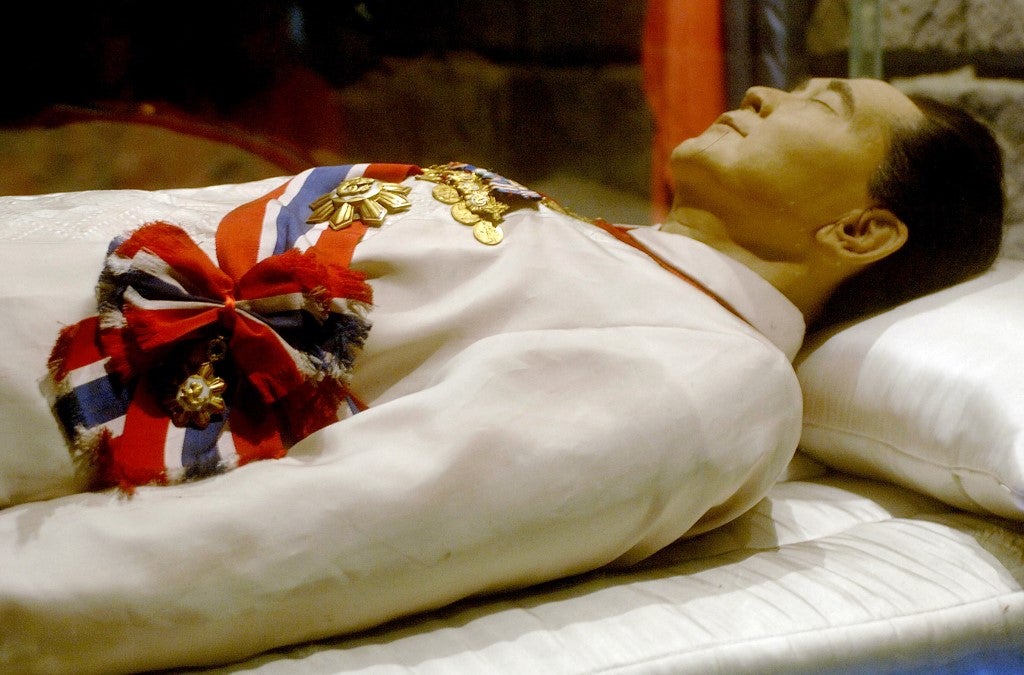 The body of the late Philippines president Ferdinand Marcos lies preserved in a refrigerated glass crypt at the Marcos family home in the northern town of Batac, Ilocos Norte, northern Philippines 11 September 2006.   (AFP)

HANOI, Vietnam — Monday marks 50 years since the death of Vietnam’s revolutionary leader Ho Chi Minh, whose embalmed corpse is on show at a stately mausoleum in Hanoi where it is visited by millions annually — despite his dying wish to be cremated.

The embalmed body of “Uncle Ho” has been on show under a glass sarcophagus since 1975 at his towering tomb. It is expected to draw huge crowds on his death anniversary Monday, which also happens to be Vietnam’s National Day.

Here are some other preserved figures around the world:

Russian revolutionary Vladimir Lenin was the original communist leader to be embalmed, starting a trend among hard-left regimes around the world.

Lenin died in 1924 aged 53, and had wanted to be buried with his mother in the former imperial capital of Saint Petersburg, but was instead preserved in a mausoleum on Red Square, where he remains, attracting visitors curious to see the Bolshevik founder of the Soviet Union.

Debates on whether to remove the body started after the collapse of the USSR in 1991 but Russia’s Communist party has vehemently lobbied to keep Lenin in situ.

Say “Ancient Egypt” to any schoolchild and the first thing they’ll think of is the mummies — preserved remains of important figures.

The British Museum in London houses a collection of 120 human mummies from Egypt and Sudan, which counts as one of its biggest draws for many visitors.

The museum also has 300 mummified animals, including dogs, cats and even a crocodile.

None of the mummies has been unwrapped since the 1790s and museum experts have used x-rays and CT scans to carry out research on them.

The divisive Filipino dictator died in exile in 1989 after he was booted out in a “People Power” revolt, but his embalmed body was returned to his ancestral home where it lay on display for over two decades.

In 2016 his mortician told AFP that Marcos’s face was made of wax, but insisted the rest of the body — covered up by clothes — was original.

He was finally interred in a Heroes’ Cemetary three years ago, sparking controversy in the Philippines, and removing him from the relatively exclusive global club of famous embalmed bodies on display.

The Chinese revolutionary leader, who died on September 9, 1976, has been embalmed and on show since 1977 in a glass cubicle in the Mao Zedong Memorial Hall in Beijing’s Tiananmen Square.

Mao’s body was placed in formaldehyde and other preserving fluids, according to an account in the People’s Daily newspaper, and today the parts of Mao’s body that cannot be seen are bathed in liquid.

When the mausoleum is closed, the cadaver is lowered into a container maintained at a low temperature, the paper said.

“Evita” was as adored by her husband’s poor and working-class base as she was reviled by the military and elite.

After Juan Peron was toppled in a 1955 coup, army officers secretly removed Evita’s corpse from its resting place at a pro-Peron trade union headquarters and hid it.

Worried that Peronist militants would find it, then-dictator Pedro Aramburu had the body taken to Italy and buried in Milan under a false name.

Peron’s third wife and successor, Isabel, finally struck a deal: Evita’s body was returned to Argentina in 1974 and she has rested ever since in her family mausoleum in Buenos Aires, a place of pilgrimage for her admirers and fans of the musical and movie about her life.

The bodies of North Korea’s founder Kim Il Sung and his son and successor Kim Jong Il are on permanent display at the Kumsusan Palace of the Sun mausoleum in Pyongyang.

Their embalmed corpses rest in glass coffins on biers in separate halls suffused with dim red light, soldiers stand guard in each corner as a steady stream of visitors –- foreigners are allowed and everyone must adhere to a strict dress code — bows before them three times.

Attendants glide silently across marble floors at the cavernous complex on the outskirts of the capital, where exhibits display the two men’s possessions, vehicles and awards.

Kim Il Sung died in 1994 but remains Eternal President of the Democratic People’s Republic of Korea, as the isolated country is officially known, while Kim Jong Il, who died in 2011, is Eternal General Secretary of the ruling Workers’ Party.

Both men suffered heart attacks. Russian scientists helped embalm their bodies and are said to assist with maintenance.

Current leader Kim Jong Un, the third generation of the family to rule, and his close aides visit the mausoleum on key national holidays -– such as their birthdays — to pay their respects.