149 people rescued after boat tilts on side at Cebu port 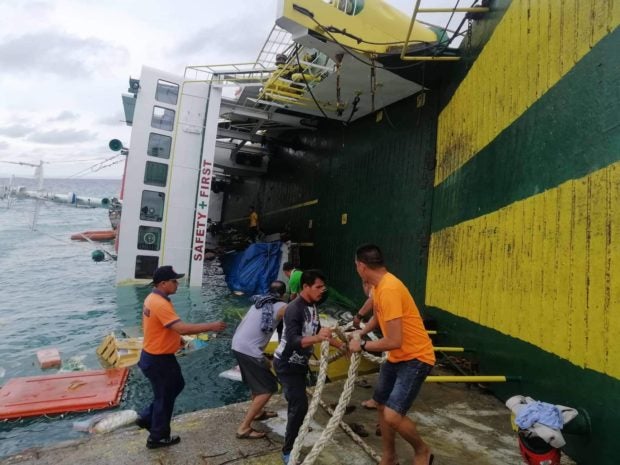 Coast Guard personnel assist crew and passengers of MV Mika Mari 8 which listed on its side during the disembarking of rolling cargoes. (Photo courtesy of the Philippine Coast Guard in Central Visayas)

CEBU CITY, Philippines — Hundreds of passengers were rescued from a roll-on-roll-off (ro-ro) vessel on Saturday afternoon after it listed on its side after arriving at the port of Consuelo in San Fransisco town on Camotes Islands in Cebu.

According to Lt. JG Michael John Encina, spokesperson of the Philippine Coast Guard in Central Visayas, 149 passengers had been rescued, four of them taken to a hospital for treatment of minor injuries.

When the ship–s rolling cargoes were disembarking, the vessel lost its balance and listed on its side. Some crew and passengers were thrown into the sea during the incident.

Coast Guard personnel from San Francisco proceeded to the area and assisted the passengers of the vessel, said Encina.

The vessel, which was carrying 11 rolling cargoes, had 18 crew members.

Encina said the weather was fine and did not cause the listing of the vessel. He said that one of the rolling cargoes caused to ship to lose balance while disembarking.

Half of the vessel was submerged in the water.

The PCG vessel BRP Suluan with quick response and environmental protection teams were deployed from Cebu City to Consuelo port to further check and assess the incident.