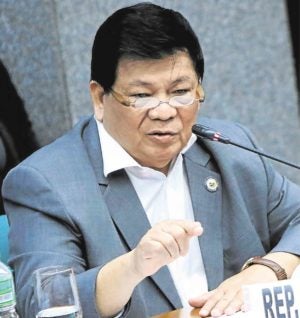 All 1,914 heinous crime convicts whose sentences were cut short based on supposed good behavior should be “treated as escapees” and rearrested for illegally benefiting from a law that shortens jail time, according to the chair of the justice committee of the House of Representatives.

Leyte Rep. Vicente Veloso III, who served on the Court of Appeals for 11 years, said he agreed with President Duterte’s chief legal counsel and spokesperson Salvador Panelo that these prisoners should have been excluded from the good conduct time allowance (GCTA) law, or Republic Act No. 10592.

“It’s a basic rule of law that no cause of action can proceed from an illegal transaction,” Veloso told the Inquirer by phone.

“Under Republic Act [No.] 10592, those convicted of heinous crimes are not qualified to be considered initially [for release], even if it’s just counting one day [of good behavior],” he added.

The Bureau of Corrections (BuCor) quietly released more than 22,000 prisoners for good behavior over the past five years in accordance with RA 10592. They included 1,914 who were sentenced to long prison terms for murder, rape, drug offenses, parricide, kidnapping and arson, a BuCor official said on Thursday.

Speaking to reporters in Beijing where he accompanied President Duterte’s fifth visit to China, Panelo said the good conduct law was illegally applied.

“That cannot be done because the law is very clear,” Panelo said at a press briefing.

Section 1 of RA 10592 provides that “recidivists, habitual delinquents, escapees and persons charged with heinous crimes are excluded from the coverage of this Act.”

Veloso said rearresting the released prisoners was the “only course of action” for the BuCor.

On Tuesday, the House justice committee will begin its investigation on the application of RA 10592, a day after the Senate opens its own inquiry into the GCTA policy. 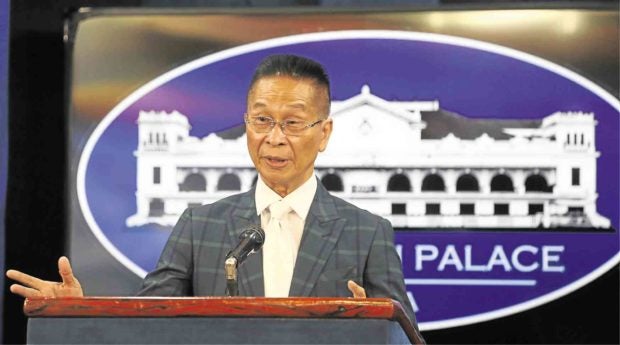 Panelo, like Veloso, said the freed convicts “should be returned to prison until they serve the full term of their sentence.”

It was up to the Department of Justice (DOJ) to deal with the legal implications of the issue, noting that court orders were needed to rearrest the ex-convicts.

Will rearrest be legal?

“Of course, they [released convicts] will question it. They will say, ‘You have already released us.’ But it’s easy to dispute that. We can just tell them that they were disqualified and there was a mistake,” Panelo said.

But human rights lawyer Theodore Te doubted whether the government could legally rearrest released convicts even if they were freed due to an erroneous application of the good conduct law.

In a statement, the former Supreme Court spokesperson explained that under Article 22 of the Revised Penal Code, “any penal law may be applied retroactively if it is to the benefit of an accused or convict, [and] this would include an erroneous interpretation in good faith of the law.”

Unlike in a conditional pardon where a convict can be sent back to jail for violating the condition for the pardon, Article 99 of the Code “expressly says that the GCTA, once granted, cannot be revoked and its consequences, once set in place, cannot be reversed,” he said.

Panelo, however, insisted the released convicts could be rearrested, even if the law stated that their release on good conduct could not be revoked.

“When you say it cannot be revoked, it assumes that the grantees are qualified,” he said. “If they are not qualified, how can you apply that provision?”

Sen. Panfilo Lacson, who earlier said that four Chinese drug lords were among those released, expressed cautious support for Panelo.

“At last! As they say, there is always a first time to do right. That is of course assuming that Sec Panelo is correctly interpreting the provisions of the GCTA law,” Lacson said. “I agree with his call but his legal opinion is subject to interpretation of the Supreme Court eventually, if it is brought to them for interpretation.”

Sen. Francis Pangilinan said that while it was right to rearrest those released because of a wrong interpretation of the law, the government “cannot forgo demanding for accountability for the ones responsible for including heinous crime convicts in the list of freed prisoners.”

“Were there other considerations beyond applying the law without fear or favor? Are these cases of a ‘most efficient’ system of justice money can buy? We must find the answers to these questions,” he added.

Justice Secretary Menardo Guevarra on Friday said the government would postpone the deportation of the four Chinese drug lords who had been among those released and were now in the custody of the Bureau of Immigration.

He said they would be held until implementing rules and regulations or guidelines on the application of the good conduct law had been reviewed by a joint committee formed by the DOJ and Department of the Interior and Local Government.

The committee also was to determine the proper action to take on the heinous crime convicts who have been released, Guevarra said in a statement.

The good conduct law drew attention from the public and lawmakers after it was cited last week as the basis for the supposed Aug. 20 release of Antonio Sanchez, a former mayor of Calauan, Laguna, who was serving a total of nine 40-year prison terms for rape and murder.

His release was aborted amid public outrage. —WITH REPORTS FROM JEROME ANING, JULIE M. AURELIO AND DEXTER CABALZA

Read Next
DOJ panel probing Robredo et al. defers tackling OSG role
EDITORS' PICK
Smart releases Hyun Bin’s second TVC
Current dominant strain of COVID-19 more infectious than original—study
Water remains our saving grace right now
DOLE: Return of OFWs’ remains from Saudi to be ‘delayed,’ deadline moved to ‘early next week’
‘Justice will be done,’ Duterte assures as he vowed probe on Jolo incident to bare ‘truth’
EuroMillions Superdraw: A lottery draw unlike any other is coming to the Philippines
MOST READ
Duterte tells military: No other president looked at you the way I did
BREAKING: Duterte signs anti-terror bill into law
Locsin warns of ‘severest response’ if China’s army drills in SCS ‘spill over’ to PH domain
Vico: Cleanup of bidding process saved Pasig gov’t P415M
Don't miss out on the latest news and information.