UPLB students’ days of horror: More could have become ‘gift for boss’ 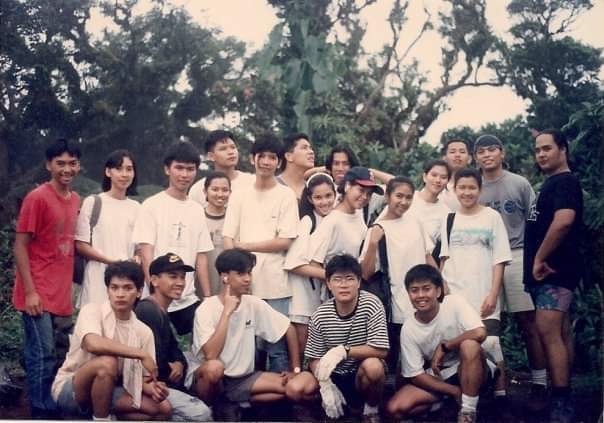 Allan Gomez (first man from left in a kneeling position) is with fellow members of the UPLB mountaineering group. This photo was taken during one of their hiking trips. One of the members of the organization remembers Gomez as a shy yet protective guy, especially towards women. Gomez was murdered in June 1993. Photo supplied by Jesse Vera Acebes

MANILA, Philippines – A gruesome story that shocked the nation to its core over two and a half decades ago is creeping its way back to the headlines — the man convicted for the 1993 brutal deaths of University of the Philippines-Los Baños (UPLB) students Eileen Sarmenta and Allan Gomez was almost declared a free man.

The news of the possible release of convicted murderer and rapist former Calauan town Mayor Antonio Sanchez sparked public outrage, and for some, the resurgence of the horrific details of the case meant opening up old wounds and reliving the nightmares left by the past.

The same is the case with Jesse Vera Acebes as he says: “Eileen and Allan were not the first.”

The year was 1991, nearly two years before the case of Sarmenta and Gomez happened, 21-year-old Acebes was on his senior year as an agriculture student of UPLB.

“Exam week,” as UPLB students call it, is the time of the semester where the final surge of examinations is given to students. This meant a few hours of sleep that can be counted by one hand and endless handouts and notes to be read.

But UPLB in the year 1991 was not exactly the ideal spot when it comes to offering a bunch of options when you’re looking for a place to celebrate as Acebes described the university nightlife as “quiet.”

There was one place, however, just outside the university near the International Rice Research Institute (IRRI) called “Panicles,” a relatively hidden area situated in the middle of the rice fields. It was a huge vacant spot away from the crowd–a perfect place to unwind, share stories and hand-carried drinks with your friends. 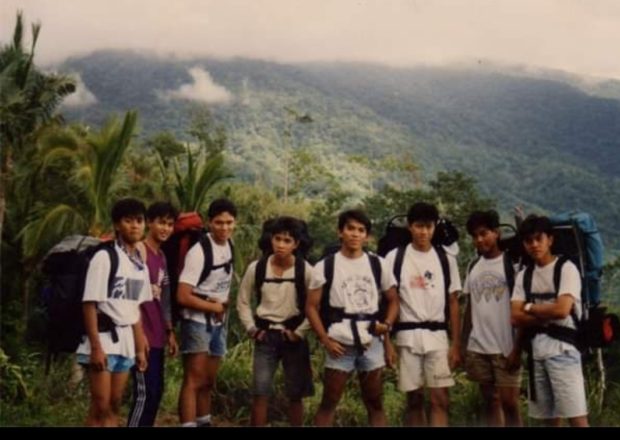 Jesse Vera Acebes (fifth from left) recalls the encounter he and his friends had with a man wearing a military outfit just outside the University of the Philippines-Los Baños. The group was celebrating the end of the “exam week.” The man in military outfit threatened that he would give the women in Acebes’ group as a “gift” to an unnamed “boss.” This photo was, however, not taken on the night of the said incident. Photo supplied by Jesse Vera Acebes

Around 8 in the evening, Acebes and his friends–a group of 13 to 14 people–parked in a small dead end dirt road in Panicles, only approximately 100 meters away from the main road.

They took out their ice chest full of cold beer and just as they were barely enjoying their first few bottles, an owner-type jeep driving along the main road suddenly took a turn towards the dirt road and headed their direction.

If there was one thing that Acebes took note of in that very moment, it was the vehicle’s headlights that were brightly beaming directly into their eyes.

But the man in the military outfit, Acebes said, made his point clear from the get-go.

This certain “boss,” however, was unnamed at the time.

One of the men in Acebes’ group also asked if he could urinate, but was ordered that if he wants to do so, he should urinate right where he stands facing everyone in the group.

Acebes, for his part, tried to negotiate but was only met with a threat.

But another man was also inside the jeep, a man whose face Acebes could not recognize even until today.

The said man inside the vehicle later called the attention of the man in the military outfit signaling that it was time to go, which Acebes believes to be due to the few cars passing the main road towards a nearby village, and they may notice the commotion.

The whole ordeal lasted for 10 minutes, which Acebes compared to “forever,” a 10-minute timeframe that seemingly had no end.

When the men drove away, the eerily silent out of fear and seemingly collected actions of Acebes’ group filled the atmoshphere. Everyone was shaking from what seemed to be a surreal encounter.

They quickly hopped on their vehicle and immediately returned to the university in front of the Student Union Building.

Nearly two years later had passed,  nobody in Acebes’ group reported the incident to the authorities.

The year was 1993, the bodies of UPLB students Sarmenta and Gomez were found in two separate locations in the town of Calauan. 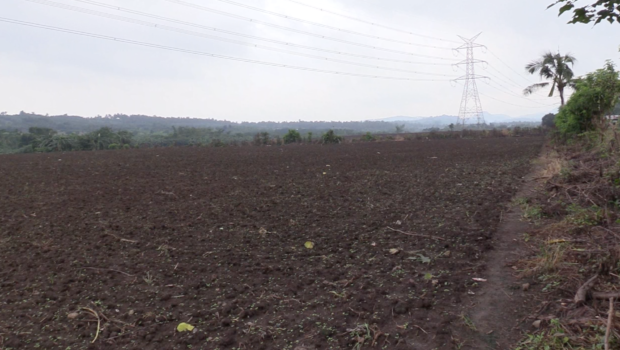 Eileen Sarmenta was gang-raped before she was shot to death. Her body was dumped in a sugarcane farm in the remote Barangay of Mabacan in Calauan town, province of Laguna. The said sugarcane farm has since become an agricultural field. Nearby residents still remember vividly the details of the case. Photo by Catherine Miranda/INQUIRER.net 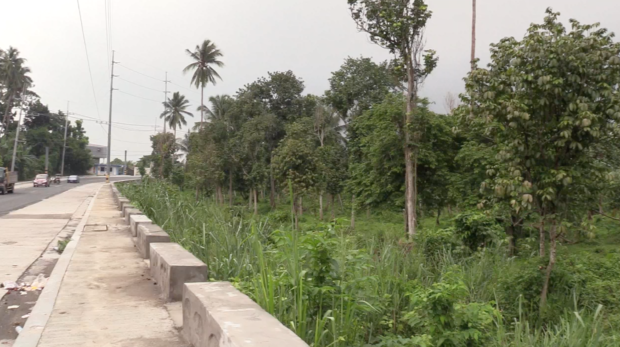 Allan Gomez was beaten black and blue with his body dumped in Barangay Imok in Calauan town, province of Laguna. The location where his body was dumped is now a busy highway connecting Calauan and San Pablo City. Photo by Catherine Miranda/INQUIRER.net

By this time, Acebes, who personally knew both Sarmenta and Gomez, had finished his studies and learned about the news through his wife who was Sarmenta’s sorority sister.

While watching the television for updates on the case, Acebes was brought back to the 1991 encounter he and his friends experience outside the campus, which could have been buried in their memory.

During the 1991 ordeal, the man in the military suit, Acebes vividly remembers, had a namepatch embroidered on his outfit.

The same R. Corcolon was the man he was seeing on the television. It was Rogelio “Boy” Corcolon who, alongside Sanchez and five others, were found guilty of seven counts of homicide over the death of Sarmenta and Gomez.

Asked if he believes that their situation was related to the Sarmenta-Gomez case, given that Sarmenta was abducted as a “gift” to Sanchez similar to the remarks made to them by the man in the military outfit, Acebes said: “I believe Eileen and Allan were not the first. I believe his men are on the hunt for some time.”

In a visit to Calauan town, INQUIRER.net learned that Corcolon had died while serving his sentence inside jail. His brother Luis, who was also convicted of the crime, is now frail and needs to be assisted and carried or put on a wheelchair should he needed to be transported within the jail premises.

‘I know Eileen and Allan’

Acebes said he personally knew both Sarmenta and Gomez and the news of their death brought mixed feelings of fear, concern for the family, and anger.

“I was really scared for the students of LB. Yung anger did not happen yet. I really felt bad. The anger only happened because when they were collected, they were put in a vehicle parang pinagpatong lang ang katawan nila kasi di uso body bags nun. Yun ang anger pero I did not know who to project my anger to,” Acebes said.

Aside from the fact that his wife and Sarmenta share the same organization, Acebes also knew Sarmenta’s boyfriend at the time.

Acebes even met Sarmenta roughly one or two weeks before her death when he was processing his transcript of records in the university.

“I was getting my transcripts.. around June nandun ako sa LB kasi I remember really vividly, kumukuha ako ng transcripts nun kasi I wanted to study some more. It was maybe a week or two weeks before nangyari yan, I saw her. She had short hair, si Eileen she always had shoulder-length hair. Nung nakita ko siya medyo boyish yung hair niya and I complimented her. Sabi ko, ‘uy, you have nice hair! Kumusta ka na?’ After a week, nangyari na yang kay Sanchez,” Acebes said.

Meanwhile, Gomez was also a member of the mountaineering group in UPLB and had shared a few trekkings and hikings with Acebes before he was murdered.

“Si Allan tahimik yan eh. Cool lang yan, naka-shades lang lagi so I was there during their training, I see him. I went to two climbs with him… Si Allan kasi since tahimik siya, he turns to be the complete gentleman so para siyang pag umaakyat [sa bundok] lagi siyang nakaalalay. Kapag may mga babae, hindi siya chickboy, he was always there to help other women. You can see the difference between the other boy climbers. Ito tahimik at gentleman,” Acebes said. 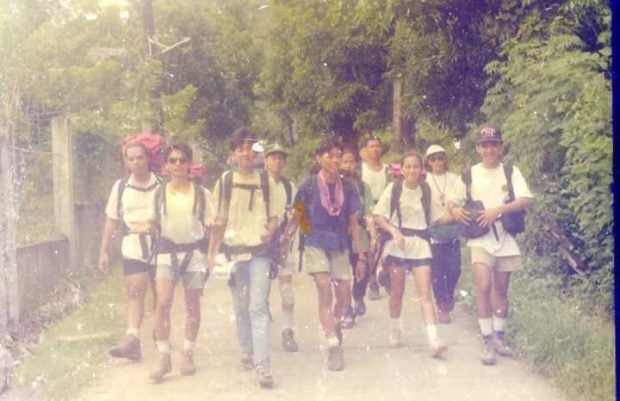 Allan Gomez (second from left) loved to hike and shared a couple of mountaineering expeditions with Jesse Vera Acebes (not in photo). During hikes, Gomez would usually stay at the back of the group to make sure that no one is left behind. Photo supplied by Jesse Vera Acebes

Acebes, now 50 years old, said he was “really angry” upon learning of Sanchez’s possible early release, noting that the former mayor should be held accountable regardless if he has reformed inside the jail.

“Hindi ko ma-imagine. It does not matter if he does it again or not. He has to pay for it. I really don’t care if he’s reformed. But there’s no such thing. He’s a psychopath,” Acebes said. /jpv