Mexico’s new drug war may be worse than old one

COATZACOALCOS, Mexico — Mexico’s drug war appears to be back – and it may be worse this time around than in the bloody years of the government’s 2006-2012 offensive against drug cartels.

Back then, the worst of the violence was confined to a few cities. Now it is spread out throughout the country. Once it was not uncommon for gangs to kill adults but leave children unharmed. Now, the killing of children alongside their parents has become all too frequent.

Perhaps the most disconcerting change: Bloody cartel violence outraged Mexicans and captured international attention for the drug war, which saw 27,000 homicides during its peak in 2011. Today, even though the number of Mexico’s homicides soared to near 35,000 last year, the bloodshed seems to draw less attention and indignation.

It has all left many Mexicans wondering which way to turn.

That was evident this week in Coatzacoalcos, an oil industry city in the Gulf coast state of Veracruz where residents said gangs have been fighting over turf and extorting business owners with threats of violence. Late Tuesday, suspected members of the Jalisco cartel showed up at the Caballo Blanco nightclub, blocked its exits and set a fire that killed 28 people trapped inside, apparently because the owner had either refused to make extortion payments or sold drugs from another gang.

Vanessa Galindo Blas lost her common-law husband, Erick Hernandez Enriquez, to the blaze. Both were natives of Coatzacoalcos, but had been discussing moving away.

“We had talked about leaving here for somewhere safer, so our kids could have a better future,” Galindo Blas said Thursday as she stretched her hands out over Erick’s bare metal coffin. On it rested a photo of him wearing an “I Love Coatzacoalcos” T-shirt.

But they could never agree on a place to move, in part because violence is now a problem across much of Mexico, so no place is really safe. 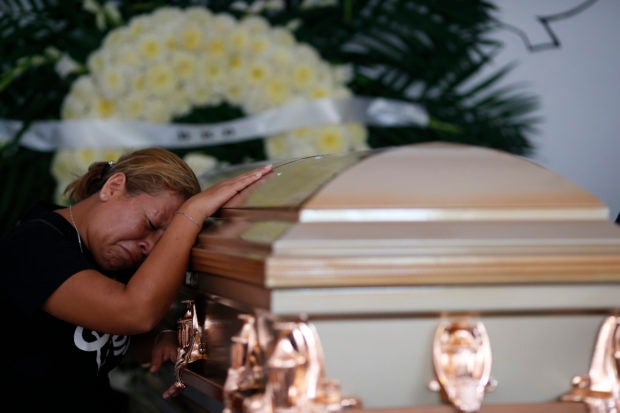 Vanessa Galindo Blas grieves on the coffin that contains the remains of her late husband Erick Hernandez Enriquez, also known as DJ Bengala, who was killed in an attack on the White Horse nightclub where he was DJ’ing, as the family brings his body for burial in the municipal cemetery in Coatzacoalcos, Veracruz state, Mexico, Thursday, Aug. 29, 2019. “We had talked about leaving here for somewhere safer, so our kids could have a better future,” Galindo Blas said Thursday as she stretched her hands out over Erick’s bare metal coffin. (AP Photo/Rebecca Blackwell)

From 2006 to 2012, much of the drug war killing occurred in a string of northern Mexico cities – Ciudad Juarez, Tijuana, Culiacan, Reynosa, and Nuevo Laredo.

“Now it is more dispersed, and that also makes it harder to control,” said Alejandro Hope, a security analyst in Mexico.

But counting down all the similarities – deadly arson attacks, bodies left piled in heaps or hung from overpasses, massacres at parties, beheading videos posted on social media – the parallels between now and then are all too clear.

“It’s like deja vu all over again,” said Hope.

Another disturbing trend is that young children are being gunned down by killers targeting adults. The Sinaloa and Juarez cartels once prided themselves on their targeted killings, which riddled intended targets with bullets while leaving family members untouched.

Now, children are being killed with chilling frequency.  In June, a young boy was killed along with his father in Sonora state. In July, a 10-year-old was killed during a robbery in Puebla state. In August, gunmen burst into a home in Ciudad Juarez and fired 123 bullets that killed three girls – aged 14, 13, and 4 – along with an adult male who apparently was the real target.

Two years ago, Coatzacoalcos made headlines across Mexico when a man, his wife and three young children were gunned down by a drug cartel. In contrast, the shooting of the three Ciudad Juarez girls drew less attention.

“It seems like we are becoming accustomed to this, to people killing children. I don’t want to become accustomed to that,” said Lenit Enriquez Orozco, an activist in Coatzacoalcos.

Her brother, Jonith Enriquez Orozco, has been missing since he was abducted on September 25, 2015. There has been no trace of him since, even though her group, the Mothers’ Collective of Searchers, has hunted for traces in clandestine burial grounds across Veracruz.

Hope notes Mexico has a lamentable record in investigating and prosecuting killings – over 90 percent of crime go unpunished.

“The risk involved in killing a man, or killing his whole family, is the same,” the analyst said. Under that logic, wiping out an entire family “has its advantages. It is more intimidating, it is easier to carry out, and it makes escaping easier.”

The relentless violence has numbed many people. 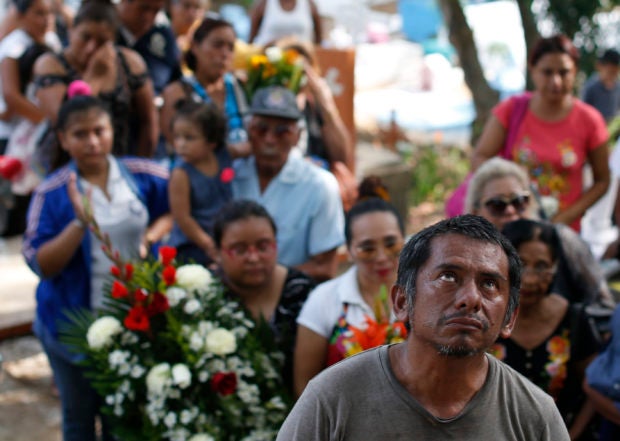 A grieving family member looks to the heavens as mourners bury Maria del Carmen Segovia Padua alongside her aunt Zuleyma Hernandez Sanchez at the municipal cemetery in Coatzacoalcos, Veracruz state, Mexico, Thursday, Aug. 29, 2019. The aunt and niece, who both worked as dancers at the White Horse night club, were among the more than two dozen staff and patrons killed Tuesday night when gang members set the club on fire after blocking the exits. (AP Photo/Rebecca Blackwell)

In 2010, gunmen burst into a party of high school students in Ciudad Juarez’s Villas de Salvarcar neighborhood, killing 15 in what appeared to have been a case of mistaken identity. The bloodbath provoked large, angry street protests and a visit by an apologetic President Felipe Calderon.

This year, in April, gunmen burst into a party in Minatitlan, near Coatzacoalcos, and killed 14 people. Days later, a few dozen people held a subdued peace march.

“It’s politics as usual, nothing happened. This should generate generalized indignation,” against cartels and government leaders alike, Hope said.

Many Mexicans also are willing to give Lopez Obrador the benefit of the doubt as even the president acknowledges that violent crime is the most serious challenge he faces. Lopez Obrador insists on his go-slow policies of reducing youth unemployment will eventually solve the root causes of the problem better than declaring another frontal offensive against drug cartels.

Carlos Angel Ortiz is one of those who do not fault Lopez Obrador.

“It is like the president says, ‘Only the people can save the people,” Ortiz said as he made plans to bury his niece, Xóchitl Irineo Gomez, a dancer at the nightclub who died of smoke inhalation, leaving behind a son and a daughter ages 7 and 3.

“We have to look out for each other, and report crimes more,” Ortiz said.

The poor provide Lopez Obrador’s base, and it is that group who suffers the most from crime. Irineo Gomez was the sole support of not only her children but her elderly parents. Erick Hernandez Enriquez left a little behind for his family aside from a modest, three-room cinderblock house.

“There are a lot of empty houses in Coatzacoalcos, a lot of people have left,” said Maria Fabiola Davila, a civic activist. “Those who can afford it move to another country.” /kga