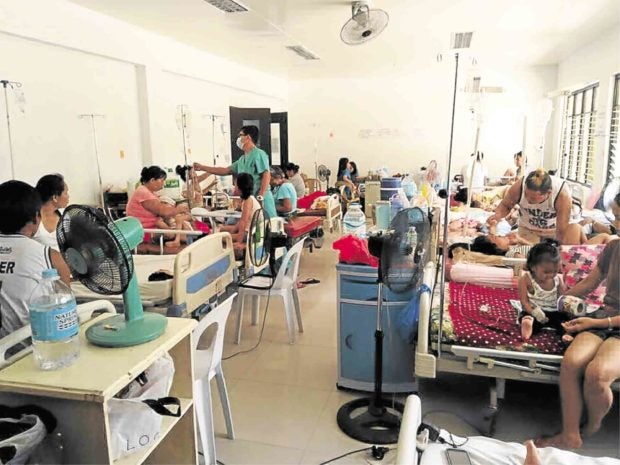 DENGUE WARD A ward at Eastern Samar Provincial Hospital in Borongan City is full of dengue patients and their families. The provincial board of Eastern Samar declared the province under a state of calamity due to the rising number of dengue cases. —PHOTO COURTESY OF PHILIPPINE INFORMATION AGENCY

MANILA, Philippines – The Commission on Human Rights (CHR) has expressed alarm about the increasing number of Filipino children affected by dengue in view of the ongoing national epidemic.

According to CHR Spokesperson Jacqueline de Guia, it is the responsibility of the government to protect the children from harm like health risks and diseases.

“Ensuring the protection of children is a primary obligation of the State.  This includes putting premium to their health, which is key to the development of their full potential and enjoyment of life and other rights,” De Guia explained.

“Dengue poses a major harm to children as well as other citizens. Climate experts warn that the global warming will worsen the dengue challenge for it will result to the increase in the number of mosquitoes and a larger geographic range,” she added.

On August 7, the Department of Health (DOH) declared a national epidemic after the department found out that the rate of infection has increased to around 5,100 cases per week.  For this year, dengue cases have surged to its highest in five years.

DOH Undersecretary Rolando Enrique Domingo said that as of July 27, there were 167,606 dengue cases with 661 deaths.  Of these cases, around 30,000 are children aged between 5 to 9, an Inquirer research showed.

READ: The alarming truth about dengue

De Guia said that they are monitoring the situation and are noting the steps taken by the government in addressing this problem.

“As part of our constitutional mandate, we shall continue to monitor the efforts of the government, particularly DOH, with regards to this issue. We also enjoin the public to cooperate with the efforts of the government, follow reminders and warnings, and help with information drive for it is our collective and moral duty to uphold and protect the health and welfare of all especially the children,” she said.

“We recognize that DOH has intensified its efforts focusing on destroying the breeding sites of mosquitoes. The health agency has also assured the public of the readiness of public health centers and hospitals to attend to dengue cases particularly in areas with highest incidence,” she added.

The CHR also urged the government to explore other long-term measures in terms of protecting children, like the proper application of the assailed Dengvaxia vaccine.

“We reiterate our reminder that utmost due diligence and thorough care be exercised in the effort to address the epidemic as well as in formulating long term solutions to protect children and prevent the recurrence of this deadly health challenge,” De Guia said.

The dengue vaccine was blamed for the deaths over 100 patients, after pharmaceutical company Sanofi Pasteur decided to withdraw the vials for adverse effects on seronegative patients or those who have yet to contract the virus prior to vaccination.

“Fighting the root cause of dengue through extermination of mosquitoes is one way to curb the epidemic but equally important is protecting the children in the long term through healthcare programs including vaccination,” she added.

“We note that DOH has affirmed the Food and Drug Administration’s (FDA) permanent revocation of the Certificates of Produce Registration (CPRs) of [anti-]dengue vaccine Dengvaxia […] but has given the pharmaceutical company another chance to re-apply and ensure compliance with all relevant laws, rules, and regulations in light of the epidemic,” she said. /jpv