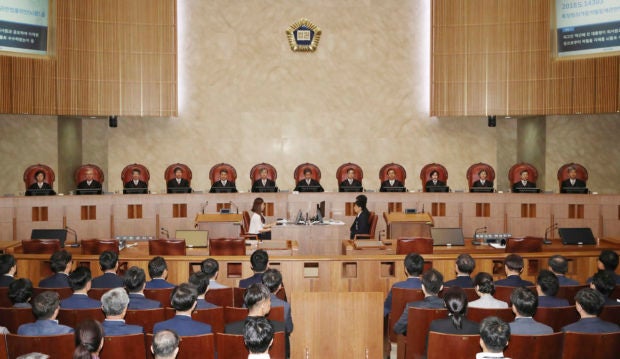 South Korean Chief Justice of the Supreme Court Kim Myeong-su, top center, sits with other justices upon their arrival at the Supreme Court in Seoul, South Korea, Thursday, Aug. 29, 2019. South Korea’s top court on Thursday sent back jailed ex-President Park Geun-hye’s corruption case to a lower court for separate trials for her previously convicted charges, a ruling that could increase her already-lengthy prison term. (Yonhap via AP)KO

SEOUL — South Korea’s top court on Thursday sent back jailed ex-President Park Geun-hye’s corruption case to a lower court for separate trials on the charges on which she was convicted, a ruling that could increase her already-lengthy prison term.

The Supreme Court also ordered retrials for Park’s confidante and Samsung’s de facto chief, two other high-profile figures convicted in a 2016 scandal that saw millions of people rallying in the streets for months. Park, South Korea’s first female president, was impeached by lawmakers in December 2016 and officially removed from office in March 2017.

An appellate court last year sentenced Park to 25 years in prison after convicting her of bribery, extortion, abuse of power and other charges together. That was an extension of a 24 year-year prison term set by a district court, which also handled Park’s charges together.

But the Supreme Court ordered the Seoul High Court to deal with Park’s bribery charge separately from other charges, based on a law requiring so for cases involving a president or other elected officials, even when the alleged crimes are committed together.

Local media said Park could face a lengthier prison term because courts handling a case with multiple charges typically do not impose the maximum sentence for each charge.

Park will remain in jail because the court did not overturn all her convictions, only the charges that it believed required a separate trial. And even in sending back the bribery charges to the lower court, the Supreme Court wasn’t sending the case back with instructions to consider that she might be innocent.

Park, 67, has called herself a victim of political revenge. She has refused to attend her trials since October 2017 and didn’t attend Thursday’s court session.

Park was earlier convicted of colluding with senior government officials to blacklist artists critical of her government to deny them state assistance programs. She also was convicted of passing on presidential documents with sensitive information to Choi via one of her presidential aides.

The scandal led to the arrests, indictments, and convictions of dozens of high-level government officials and business leaders. Choi received a 20-year prison term and Lee Jae-yong, Samsung’s billionaire heir and the vice-chairman of Samsung Electronics, a suspended prison term.

In 2017, Lee, the only son of Samsung’s ailing chairman Lee Kun-hee, was sentenced to five years in prison for providing bribes to Park and Choi in return for government backing for his attempt to bolster his control over the Samsung group and other charges. But in early 2018, he was set free after the Seoul High Court overturned some of his convictions and suspended his sentence. His earlier imprisonment surprised many because South Korean courts had often showed leniency toward crimes by business tycoons. 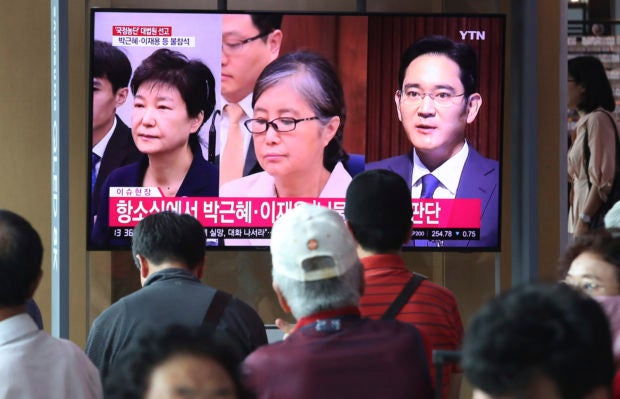 Lee In-jae, who heads the legal team representing Lee Jae-yong, called the Supreme Court’s decision “regrettable.” He said it should be noted that some justices of the court expressed dissenting opinions about the bribery charges surrounding Lee Jae-yong.

Samsung Electronics released a statement saying it regrets “causing concern to (Korean) people” over the corruption case and that it wouldn’t repeat past mistakes. The statement did not include specific comments on Thursday’s decision.

Park, a daughter of late President Park Chung-hee, was once the darling of conservatives in South Korea and dubbed by local media as the “queen of elections” for her ability to win tight elections. Her fall badly damaged conservatives in South Korea and helped her main liberal rival and current President Moon Jae-in win an easy victory in a by-election triggered by her early departure.

Park still has fierce supporters who stage rallies in downtown Seoul every Saturday calling for her release. On Thursday, more than a thousand of Park’s supporters rallied outside the Supreme Court building, waving South Korean and U.S. flags and her photos and holding placards that read “Set free President Park Geun-hye who is innocent!”

She was elected president in late 2012, largely thanks to a wave of support from conservatives who remember her father as a charismatic leader who led South Korea’s explosive economic growth. Liberals see her father as a ruthless leader who severely suppressed civil rights during his 1961-79 rule.

Park Geun-hye has been embroiled in two smaller scandals, which led her to be sentenced to two years in prison for violating an election law and five years for abusing state funds. That meant she has faced the prospect of serving more than 30 years in prison. /kga