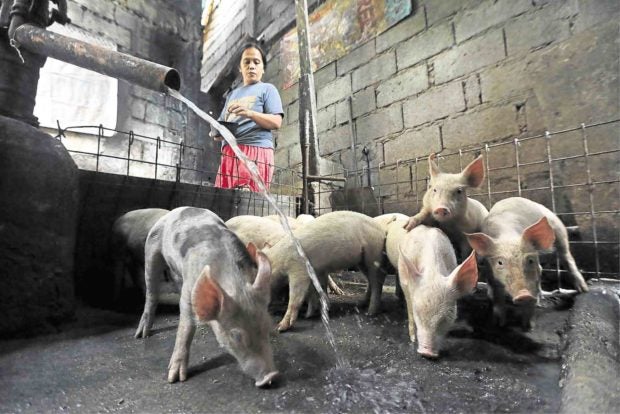 ANIMAL WATCH The Department of Agriculture has ordered its personnel around the country to keep a tight watch on the entry of imported meat and to monitor commercial and backyard pig farms to stop the spread of animal diseases. -GRIG C. MONTEGRANDE

GENERAL SANTOS CITY—At least 260 kilograms of assorted meat products, contained in boxes bearing Chinese characters, were seized and burned on Wednesday night at the airport here but agriculture officials assured that Soccsksargen region had not recorded any case of African swine fever (ASF).

The Department of Agriculture (DA) has intensified its monitoring of possible ASF cases amid fears that the disease supposedly caused the deaths of hogs in Rizal province recently.

Government quarantine workers have tightened their watch against the entry of live pigs and meat products in the region’s air and seaports, said Edgar Allan Pasaol, DA acting regional information officer. The region is composed of the provinces of Cotabato, South Cotabato, Sultan Kudarat and Sarangani, and the cities of General Santos, Koronadal, Tacurong and Kidapawan.

“The meat products came from Manila. They were confiscated as part of the efforts to prevent the entry of animal diseases in the region,” she told the Inquirer.

Habacon, citing information from airport authorities, said a Chinese, who owns a restaurant in the city, brought in the meat products.

“When the boxes were opened, they contained pecking duck meat, siopao and pork bones, among others,” Molina said, noting that the cargo also lacked proper documents.

Habacon, however, assured that all fresh meat sold in markets in the region are produced locally and are safe.

Agriculture Secretary William Dar recently issued a memorandum to local veterinary and agriculture offices to ban the transport of live animals, meat products and meat byproducts if these have no veterinary health certificate from a licensed veterinarian and shipping permit from the Bureau of Animal Industry.

Esteban Co Jr. of the South Cotabato Swine Producers Association (Socospa), earlier told the Inquirer that the group had not monitored any case of ASF in farms of its members.

“We are always on the lookout for any possible disease. I assure the public that the meat we produced and sold in the markets are very safe for consumption,” he said

Socospa is composed of about two dozen piggery owners in this city and neighboring areas. Its members have been shipping live pigs to Metro Manila and the Visayas, Co said. —BONG S. SARMIENTO