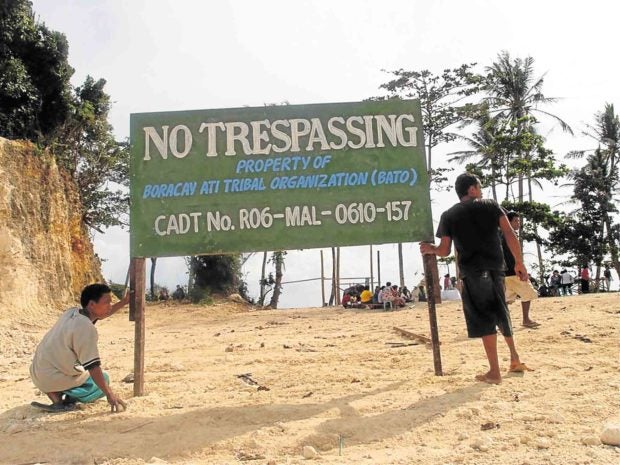 SLICE OF PARADISE Members of the Ati tribe put up a sign to stake their claim on a piece of ancestral property on the resort island of Boracay in Aklan province. —NESTOR P. BURGOS JR.

MANILA, Philippines – The Ati tribe of Boracay Island won its case before the Supreme Court in claiming the 2.1-hectare property in Barangay Manoc-Manoc.

In its decision, the Supreme Court’s First Division said private claimants made the wrong move when it went to the Regional Trial Court (RTC) to cancel the Original Certificate of Title (OCT) and the Certificate of Ancestral Domain Title, Reconveyance and Damages issued by the National Commission on Indigenous Peoples (NCIP).

The high court said private claimants should have gone to the Court of Appeals instead of the RTC.

“Petitioners (Private claimants Gregorio M. Sanson and wife Ma. Lourdes Tiron-Sanson) could have filed an appeal from the NCIP En Banc resolution to the Court of Appeals, pursuant to Rule X, Section 27 of the Revised Rules of Procedure before the NCIP. The records show no such appeal was taken,” the high court said.

It added that “it would then appear that the complaint subsequently filed was an attempt to revive a lost appeal, which cannot be countenanced.”

The case stemmed when the NCIP awarded a Certificate of Ancestral Domain Title (CADT) to the Ati Tribe in 2010. A year later, the Sansons moved for the cancellation of the CADT before the RTC.

The RTC issued a ruling on the case despite questions on its jurisdiction prompting to take the case before the appeals court and eventually the Supreme Court.