Senators say document naming NPA sympathizers in Negros Oriental should be taken seriously amid spate of killings in the province
By: Leila B. Salaverria - Reporter / @LeilasINQ
Philippine Daily Inquirer / 05:18 AM August 28, 2019 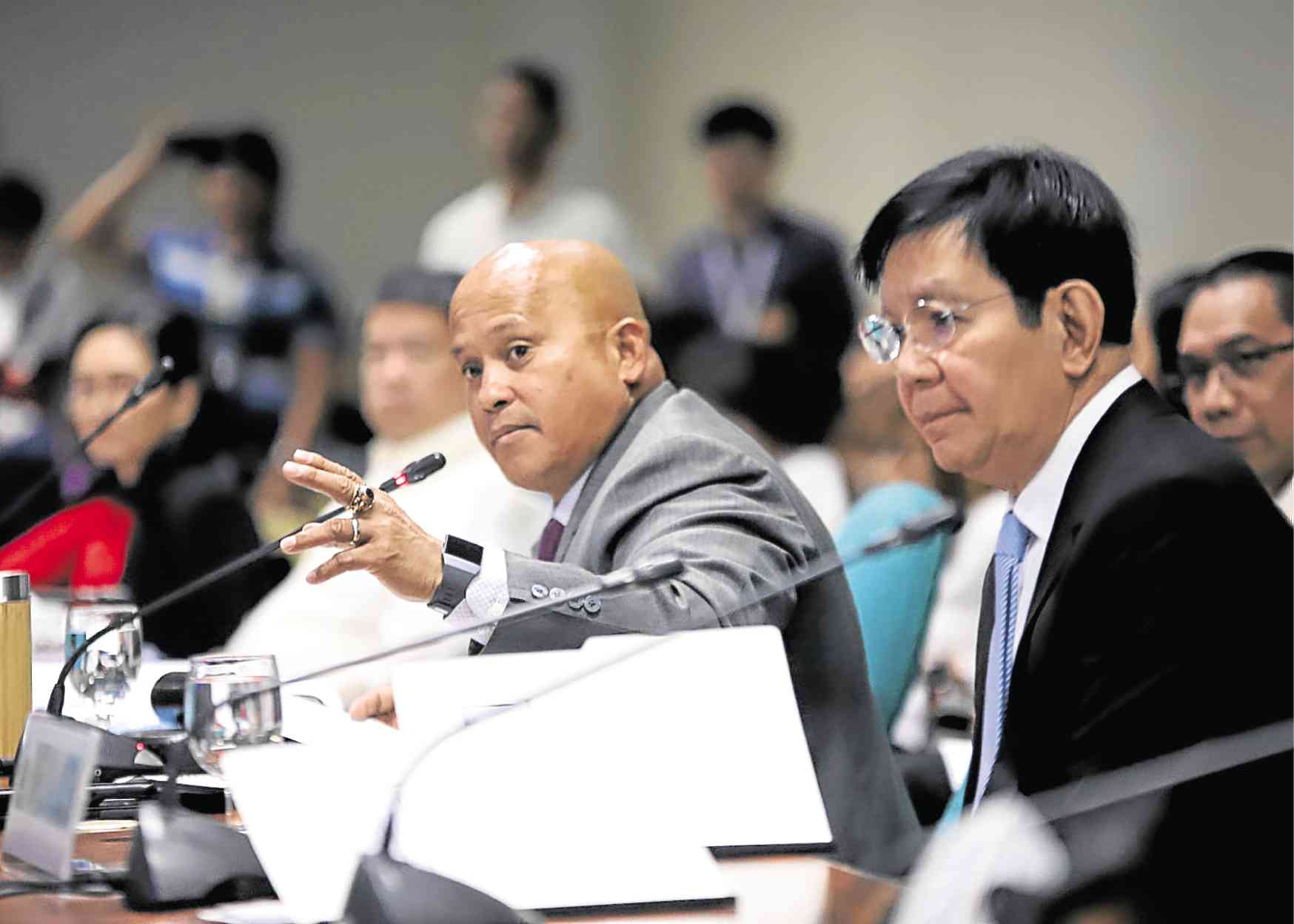 NEGROS VIOLENCE Sen. Ronald dela Rosa (left), chair of the Senate committee on public order and dangerous drugs, leads the public hearing on the series of killings in Negros Oriental province. With him is Sen. Panfilo Lacson (right), who, like Dela Rosa, served as chief of the Philippine National Police.

MANILA, Philippines — Senators on Tuesday called on the police to investigate reports of the existence of a group in Negros Oriental province that supposedly had a list targeting suspected sympathizers of communist rebels, after five people there, including lawyer Anthony Trinidad, had been killed.

Negros officials also said there was a need to beef up the police and military forces in the province amid the recent killings in Guihulngan City that were attributed to either New People’s Army (NPA) rebels or government soldiers and militia men.

At the Senate hearing on the incidents, Sen. Risa Hontiveros cited reports that Kawsa Guihulnganon Batok Komunista (Kagubak), which roughly translates to People of Guihulngan Against Communism, had come out with the list before the murder of Trinidad on July 23.

The list should be taken seriously since people on it had been killed, Hontiveros said, adding that Trinidad was the latest victim among 15 people targeted.

“With one-third on the list already killed, this confirms that the hit list of Kagubak is real and not to investigate it would be an outrage. Let us take seriously not just the list, but also Kagubak because they have a bloody track record in Guihulngan,” she said.

Hontiveros said other people on the list should be given protection.

Sen. Ronald dela Rosa, a former Philippine National Police chief, said this was the first time he had heard of Kagubak.

No end to killings

Dela Rosa, who presided over the hearing, said the identities of the people behind Kagubak should be known and it should be determined if they were the ones who killed Trinidad and the other people on the list, identified as Heidi Flores, Roberto Caday and Boy Litong and his son.

If this group was not stopped, Dela Rosa said there could be no end to the killings as the NPA could retaliate.

He said Kagubak had blamed the NPA for killing 10 people in the province. “It seems these people are trying to fill the shortcomings of government; they took the law into their hands, if they were really the ones who killed the people on the list,” he later told reporters.

Police Lt. Col. Bonifacio Tecson, Guihulngan police chief, said he had received reports about Kagubak’s hit list in 2018. Some of those on the list had gone to see him at the station to clear their names and to make it clear that they were not NPA sympathizers.

Tecson said Trinidad had also asked for a security detail. He said he had advised the lawyer to make a formal request that he would send to the proper channels.

He said that if he would grant all requests for security, no police officer might be left at the station.

Dela Rosa said the killings should not be a problem of the police alone.

He asked local officials to address the problem of violence in Negros cities and towns, saying they should “encourage people to work together to defend their areas from vigilantes or insurgents.”

Guihulngan Mayor Guido Reyes said he had done all he could to provide the police with what they needed, including vehicles and equipment.

But he said he needed more policemen in his city. At present, the 55 policemen are tasked with protecting 105,000 residents in 33 villages. “And half of them are on duty at a time,” he added.

Negros Oriental Gov. Roel Degamo said the influence of communist rebels in the province had been reduced in recent years because of the presence of security forces.

“But when the Army’s 11th Infantry Battalion was pulled out to help in the conflict in Marawi City, a vacuum was created in Guihulngan and nearby Ayungon [town],” he said.