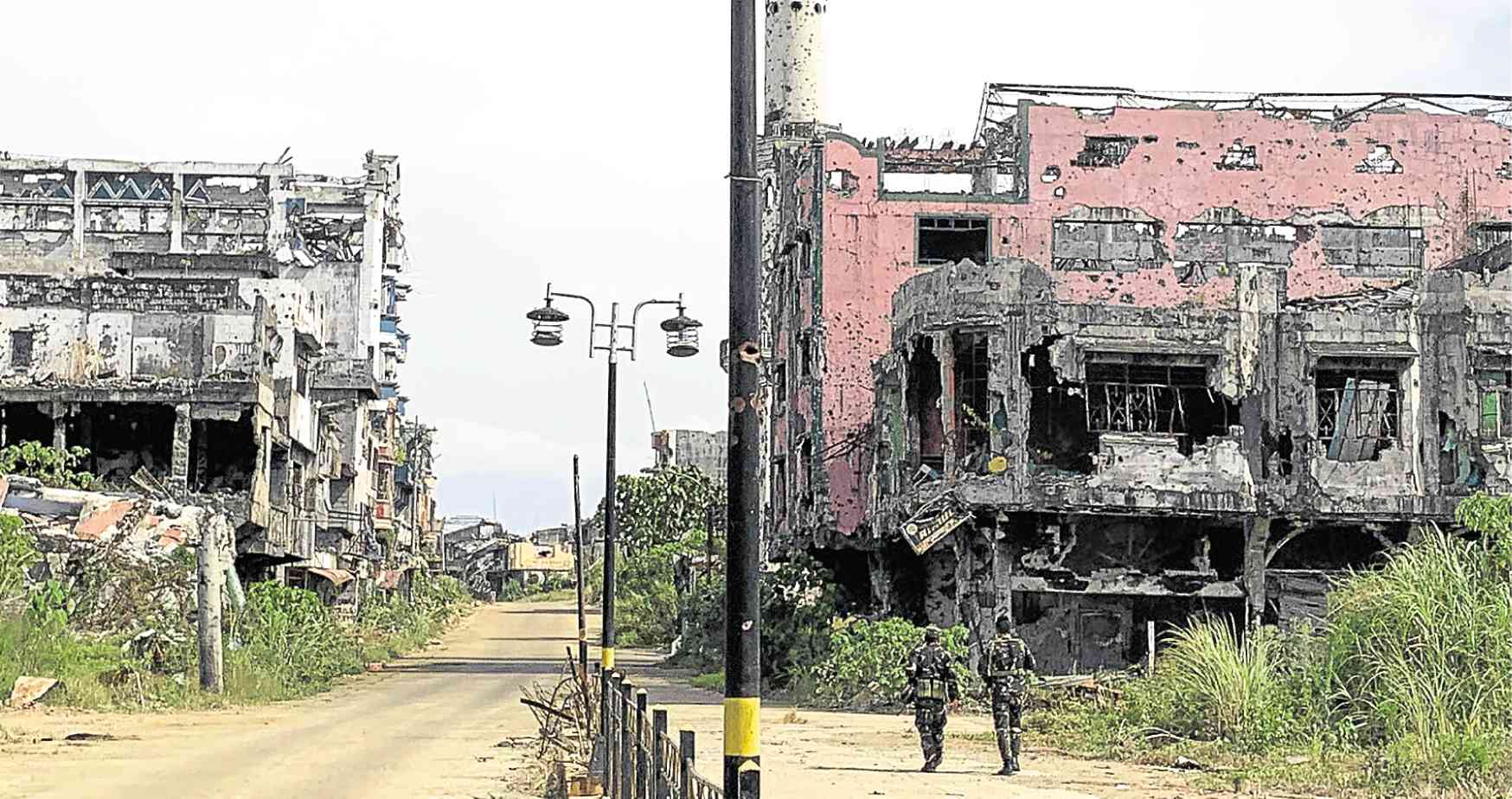 AWAITING REHAB The center of the five-month fighting between Islamic State-linked armed groups and government soldiers in Marawi City in 2017 is awaiting rehabilitation. —JEOFFREY MAITEM

MARAWI CITY, Maguindanao, Philippines — With a little startup capital and a coffee grinding machine from the Office of the Presidential Adviser on the Peace Process (Opapp), a group of young residents of Marawi, a city that has been slowly recovering from the devastation brought about by the 2017 siege by Islamist militants, started producing and selling coffee last year.

“We choose to get involved in the coffee business because we all know that Maranaos love coffee,” said Ali Macapanton, a youth volunteer for the Bangsamoro Movement for Welfare (BMW), composed of eight young residents of Marawi and two volunteers.

Macapanton said their products, under the brand Khapeta Marawi, had become popular as they tried to cope with the surge in demand.

Khapeta Marawi is only one of the success stories from Kawiyagan, a livelihood aid distribution program organized by the subcommittee on business and livelihood of the Task Force Bangon Marawi for residents displaced by the five-month fighting in the city two years ago.

As hundreds of Marawi residents trooped to the City Hall grounds here for Kawiyagan on Aug. 22, Linda Boniao, director of the Department of Trade and Industry (DTI) in Northern Mindanao, admitted that not all who had availed of funds for livelihood had been successful.

“We monitored those who had been given starter kits and capital [to start a business] and found out that instead of using the P15,000 [for their sari-sari store], they used it in buying other needs for their families,” Boniao said.

Macapanton said BMW, which also received livelihood assistance, had been trained in packaging and coffee making by the nongovernmental group Balay Mindanaw.

He said they had been marketing the products in various exhibits in the cities of Iligan, Cagayan de Oro and Davao while tapping outlets and stores advocating organic products, such as the Human Nature outlets in Iligan.

Mayor Majul Gandamra said Kawiyagan, where government agencies, humanitarian groups and local governments gather to offer their services to the public, would not only help those who lost their properties and businesses to the siege, but also those who had been rendered unemployed.

“I am very pleased that many have been helped by training, grants in cash or in kind, seeds, equipment and livestock [during the Kawigayan],” Gandamra said.

He said more displaced residents had been served because “many hands, hearts and minds were willing to extend their assistance.”

According to Boniao, the government has been holding Kawiyagan every month since August 2017 to help displaced families and individuals get back on their feet and start rebuilding their lives.

Camal Batabor, who went to the City Hall compound last week, went home with a box full of grocery items for his sari-sari store. The goods were promised to him by the DTI when he registered at Kawiyagan last year.

Batabor, who lives in Barangay Ambolong, lost his sari-sari store when his family fled the city at the height of the siege.

Although Ambolong was outside the ground zero of the fighting at the city center, several houses in Batabor’s village were burned and ransacked during the five-month fighting in 2017. 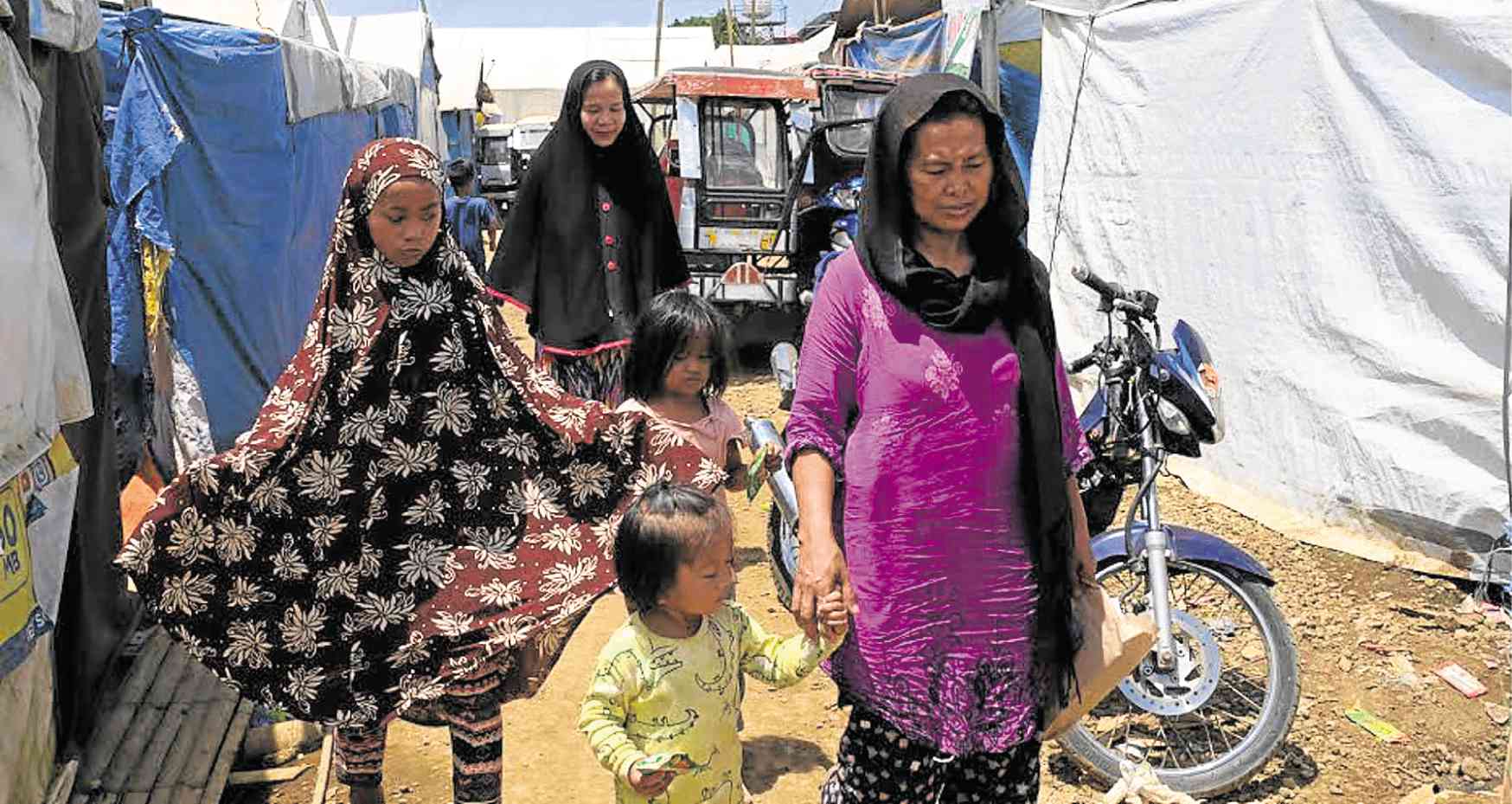 EVACUEES Many of Marawi’s residents continue to live in evacuation centers or temporary shelters two years after Islamist militants laid siege to the city. —BONG SARMIENTO

“I put in my request for grocery items worth P15,000 but I was told this is only worth P6,500. This will not fill the small structure I built but I will take care of this and I will make myself prosper,” Batabor said.

Asmin Omar and her husband Mohammad registered at the booth set by the Opapp, hoping to be included in the next batch of trainees of the Technical Education and Skills Development Authority.

Asmin wants to learn baking while Mohammad wants to earn a certificate as a welder so they can provide for the needs of their family.