CALAUAN, Laguna, Philippines — The family of convicted rapist and murderer Antonio Sanchez, a former mayor of Calauan town in Laguna, revealed Tuesday that a release order dated Aug. 20 had been issued.

Allan Antonio Sanchez, the former mayor’s eldest son, explained that an unnamed individual informed them that a release order had been released, setting their father free from prison after over 20 years in jail.

“Actually, we wondered at first why he was already released,” Allan Antonio, speaking in Filipino, said in an interview with reporters at the Sanchez residence in Calauan.

Somebody, he said, called the family to inform them of the release order. So they went to the New Bilibid Prison to pick up their father.

“Of course, we were happy that my father will be able to get out after almost 26 of suffering for a crime he didn’t do,” he said.

Just as some of the family members arrived at the NBP parking lot, they received a text message informing them that the release orders were put on hold as news of the ex-mayor’s possible release broke out in the media.

“So we wondered: If the release order had already been issued, why was my father’s release put on hold? So that’s a big question. Why?” Allan Antonio said.

He said his father had already been fingerprinted as part of the release procedure.

Asked about the issue next day, Director General Nicanor Faeldon of the Bureau of Corrections explained that there was a “first-in, first-out” system.

He gave that explanation despite his earlier announcement that Sanchez was one of the over 10,000 inmates who might benefit from Republic Act No. 10592, which increased the Good Conduct Time Allowance (GCTA) given to inmates.

“They said there was a queueing — first in, first out. Whoever went in first will be the first to get out,” Allan Antonio said. 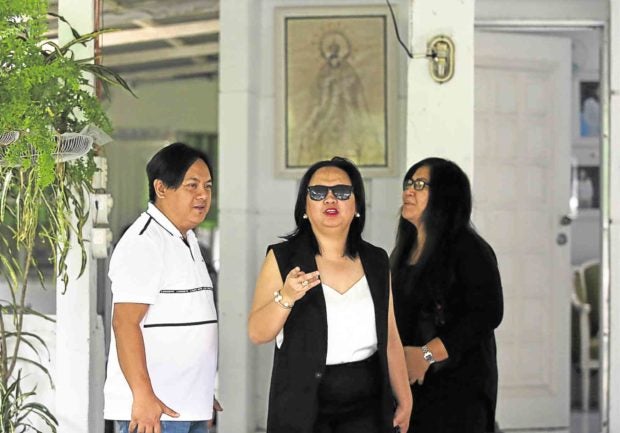 NO REUNION The eldest of former Calauan Mayor Antonio Sanchez’s children, (from left) Allan Antonio, 43, his daughter, Councilor Ave Marie Tonee, 38, and their mother, Elvira Sanchez, will have to wait for another day, if ever, for a family reunion outside prison. Sanchez was to walk free on Aug. 20 but public outrage stopped officials from opening the prison doors for him. -LYN RILLON

Sanchez’s kin said they were surprised on hearing Faeldon’s seemingly changing pronouncements as the issue continued to draw public attention.

According to Anthony Collioni, another son of Sanchez, when they arrived on Aug. 20 at the NBP, the other officials there congratulated them.

“That means those inside Bilibid already knew that our father will be getting out,” he said.

Asked about their reaction when Faeldon said in a press briefing that Sanchez might not be eligible for an early release, Allan Antonio said he was unsure if Faeldon succumbed to pressure or if indeed the intention was to keep the former mayor in prison.

“We were shocked because the first time we talked [with BuCor officials] they said he was included. Mayor Sanchez will be able to get out within two months,” Allan Antonio said. “Then things changed somewhat. I don’t know if he was pressured or something or if they just didn’t want my father to be released.”

“Sir Faeldon, we talked,” he added. “You said, you promised that you will release my daddy according to the GCTA, for which he was qualified. We believed that my daddy will be among those who will be released.”

INQUIRER.net reached out to the BuCor for comment but had not received a response as of this writing.

But Justice Secretary Menardo Guevarra said that no release order was issued for Sanchez.

“I have been informed that BuCor Chief [Nicanor] Faeldon denies having signed a release order for Sanchez,” Guevarra said.

BuCor is an agency under the DOJ.

“No report on such matter has been received by the DOJ,” Guevarra added.