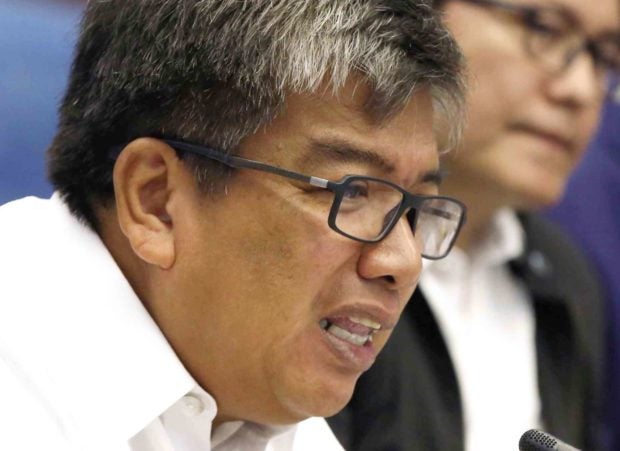 BUDGET DEFENSE Gov. Mujiv Hataman, of the Autonomous Region in Muslim Mindanao (ARMM), defends the ARMM budget at the House of Representatives.—LYN RILLON

MANILA, Philippines — Deputy Speaker and Basilan Rep. Mujiv Hataman appealed on Tuesday to the Department of Transportation (DOTr) that more budget be given to railway projects in Mindanao as he noted that the agency got the biggest increase in its 2020 budget.

He said the department’s proposed 2020 budget was around 150 percent higher than its budget for this year, which was from P54.23 billion this year to P133.43 billion.

With the P79 billion hike in the DOTr’s budget, the Mindanaoan solon wants assurance from the department that it can spend its budget on time.

“I hope that the good Secretary Tugade has found the formula in the fast use of appropriations because many people are depending on the on time completion of the projects of his department,” Hataman said.

Samar 1st District Rep. Edgar Sarmiento, meanwhile, revealed that Tugade has given the green light for the planning of the proposed synchronized bus dispatch system on Edsa and other major thoroughfares in Metro Manila.

Such a system is seen to end the traffic problem in Edsa, he noted.

“The ultimate solution to the traffic problem is volume reduction. However, to attain it, we have to augment the railway system with the centralized and synchronized bus dispatch system,” Sarmiento said in a separate statement.

The proposed bus dispatch system, the lawmaker said, was in compliance with the National Economic and Development Authority (Neda) National Transport Policy to come up with the Philippine transport system master plan which would guide the development of an intermodal transport network.

Sarmiento suggested that the service routes of buses that plies Edsa must be rationalized so that the semi-bus rapid transit system to become effective.

He also said that DOTr has also agreed to work together with the Metro Manila Development Authority (MMDA) and the House transportation committee to come up with a more detailed plan and the timeline for the implementation of the bus dispatch system.

To ensure that every bus would follow their designated dispatch schedule, these vehicles would be equipped with Global Position System (GPS) devices and RFID-readable stickers, Sarmiento said.

He also proposed that buses should use electronic cards or beep cars in the fare system to control systems loss.

For provincial buses, the lawmaker said he agrees that they would be given window hours to freely ply Edsa. Should the buses arrive during the day in Metro Manila, they should follow the bus dispatch system to their designated terminals.